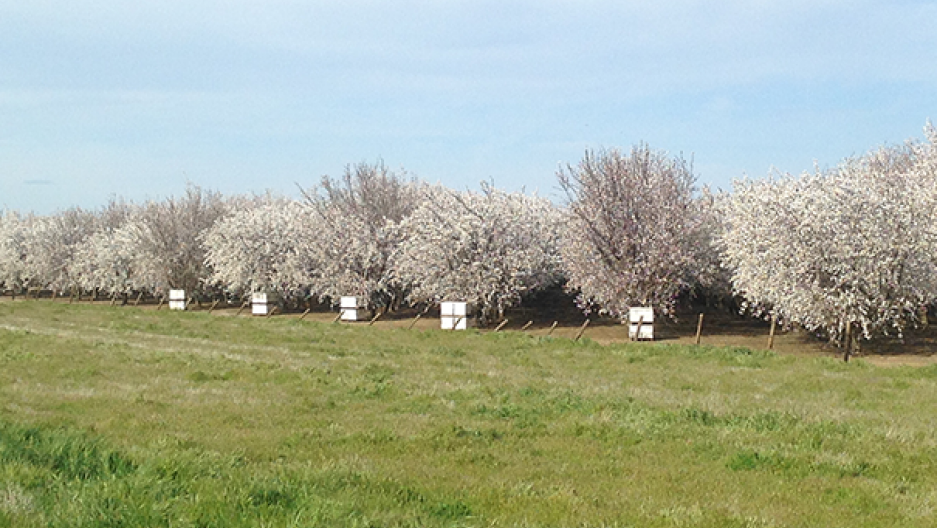 Beehives are spread out along rows of blooming almond trees. It takes billions of bees to pollinate California's annual almond crop

The Central Valley of California has the perfect climate for almond trees, but they need a lot of help. So, every year, the valley hosts the largest controlled pollination in the world.

There are about 6,500 almond farms in the Central Valley and they produce 50 to 80 percent of the world’s almonds. There aren’t nearly enough local bees, wild or domesticated, to pollinate all those flowers, so when the almond trees start to bloom, beekeepers from all over the country descend on the Central Valley.

“You can see the trucks coming from out of state. They come from as far as Florida, because it’s their bread and butter,” says beekeeper Rosemary Grissom.

In all, more than 1,500 beekeepers make the trip, and they bring billions of bees with them. When the almonds finish blooming, some of these beekeepers will take their hives on to pollinate other crops — cherries in Washington State, squash in Texas, cranberries in Wisconsin.

Grissom says a lot of people assume that beekeepers make a living from honey, but renting out their bees to farmers is how most of them pay the bills. In February, when a lot of winter rain sent the California almond crop into bloom, almond farmer Joe Del Bosque rented about 1,500 hives from Grissom for $180 dollars apiece.

But recently, beekeepers like Grissom have been struggling to cope with the widely reported, but still mysterious, phenomenon known as Colony Collapse Disorder, which has devastated bee populations throughout the country. Grissom says every year it seems like one of her friends gets hit.

“Three years ago it was our turn,” she says. “We had these two yards and there were 240 hives in each yard. I went in, in December, and one day this one was gone and then that one. It took all of them; they died. You’d look in a hive and there would be a queen and ten bees.”

Scientists say disease and parasites have weakened hives, and recent studies have linked bee decline to the use of pesticides called neonicotinoids. Joe Del Bosque says he tries to use products that are friendly to bees and only apply them at night when the insects are in their hives. And whatever he does, he gives Grissom plenty of warning.

“My pest control advisor is in constant communication with her,” Del Bosque says. “Whenever anything is happening, she needs to know. That way, she can determine if we’re using a material that’s not dangerous to bees, or, if it is dangerous, what she needs to do. In some cases, they cover up the bees [and] in some cases we move them out.”

For her part, Grissom says she just has to plan for the worst and create extra hives.

“We just make more bees,” she says. “Last year, instead of making 500 new ones we made 800, because you don’t know how many you’re going to lose in the winter. And then sometimes that doesn’t even cover it.”

So far this year Grissom’s bees are doing pretty well. After the almond bloom ends, she’ll take them over to pollinate Del Bosque’s melons.

As for Del Bosque, he’s going to keep on growing almonds. Prices are low right now, but they’re still a lucrative crop that he’s invested a lot of money into. But the future is less certain. Almonds need a lot of water and a lot of bees, and right now both are in short supply.