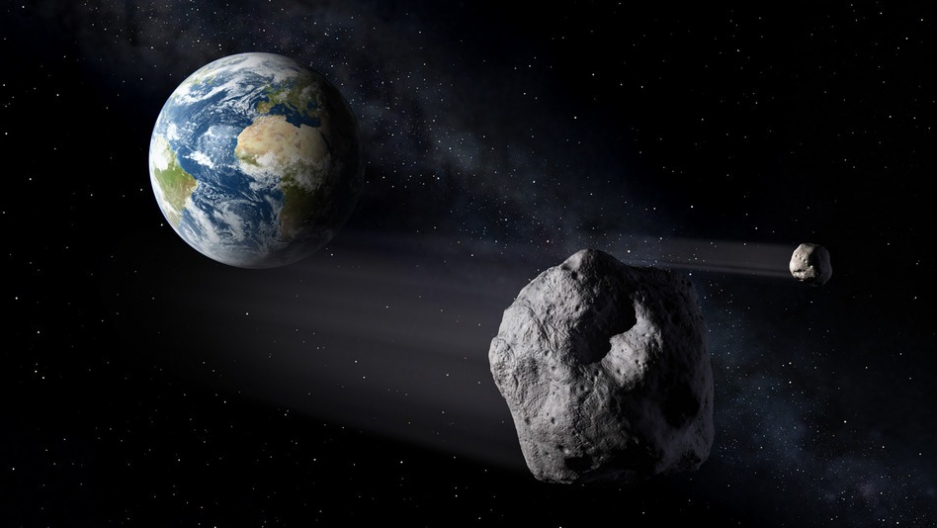 There are thousands of asteroids and comets that orbit the sun, traveling in the same cosmic neighborhood as Earth.

NASA’s Planetary Defense Coordination Officer Lindley Johnson and Near Earth Object Observation Program Manager Kelly Fast make it their business to keep track of these asteroids, and come up with ideas for deflecting any that might be in danger of striking the planet.

“NASA has been in this business of finding near-Earth objects, asteroids and comets for a little over 15 years now,” Johnson says.

Three or four times every year they detect objects up to several meters in size that come within the geo-synchronous belt of satellites. When that happens, they alert the Space Surveillance Network, an organization run by the US Air Force. Still, the probability of an asteroid hitting a satellite is pretty slim, and the probability of an object actually hitting Earth is even more remote.

“Of our current catalog of almost 14,000 near-Earth objects now, I think the highest probability of impact we have is for an object out in [the year] 2185 and it's like a one in 490 chance of impacting the Earth,” Johnson says.

Even with almost 14,000 near-Earth objects mapped, NASA’s Planetary Defense Office still can’t predict all the potential asteroids. In 2013, a meteorite hit Russia, and no one saw it coming.

“Most of our survey telescopes are ground-based and so therefore they can only observe at night, and this object came in the daytime out of the sun,” Johnson says. "But it was also a very small object only a little less than 20 meters in size and our systems really aren't capable of finding objects that small very far out in space. ... At best we might see one, you know, coming inbound from the nightside maybe only a day or two before the impact.”

But what about larger asteroids that NASA can detect? Is there a way to keep them from slamming into Earth? Johnson says NASA has a plan, but unlike some Hollywood films on the subject, the plan does not involve blowing up incoming asteroids. The idea is called a kinetic impactor, and Johnson hopes NASA will soon be able to launch a mission test it.

“NASA would launch the kinetic impactor to demonstrate the kinetic impactor technique and deflect actually a moon of a small asteroid off its orbit,” Johnson says, “What you need to do ... is just change its velocity by a slight amount and if you do that enough years in advance you only have to change that velocity by a few millimeters per second. And so you just slam a kinetic impactor into it at the right velocity vector and that will impart the energy to either speed it up or slow it down, depending on which way you want to move it enough so that a hit becomes a miss.”

NASA’s attempts to monitor asteroids aren't just to protect against Hollywood-style doomsday scenarios, however. Fast says such observations also contribute to our understanding of the universe.

“We want to have an awareness of what is coming, perhaps a little too close for comfort in order to ... keep track of them just so that if there is something that is of concern we can be aware of it,” Fast says. “It even gives us a good science background for how things have evolved in the solar system.”