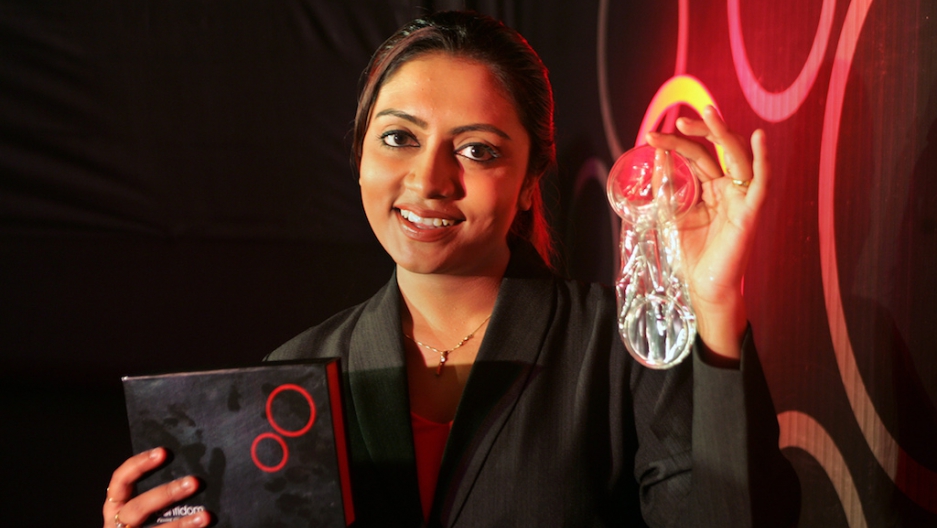 PANAJI, India — The Moods Planet condom store is set on one of Panaji’s busiest streets. Buffered by a motorcycle repair shop on one side and a jeweler on the other, this brightly lit store with its distinctive logo — the shapely ‘o’s of Moods intertwined — seems incongruous.

I walk toward it imagining the looks I’m getting from the men hanging out waiting for their bikes to be fixed. Feeling awkward, I push open the glass doors and step into the small, air-conditioned room. There are no other customers, which brings me back to my first thought about the place: In a country like India, where sex is still a taboo topic, who would walk into a store like this?

Turns out everybody does.

“Our customers are college girls and boys, housewives, people above 50,” says Nitesh Kerkar, the manager of the showroom. Kerkar is an affable young man who immediately puts me at ease. It is a quality that holds him in good stead with his customers, who often want advice more than products.

“Our store is not just for selling HLL [LifeCare, Moods’ parent company] products but also provides education and information,” says Kerkar. “Condoms are available at all pharmacies and supermarkets, but the locals feel more comfortable walking in here. They can browse through the products at leisure, ask us questions, compare products — all without judgment or embarrassment.” Inside the Moods Planet condom store.

Other popular products include lubricants, mood enhancers like perfumed candles, body glitter and nipple tassels. All of these also come together in a large red gift box called Amour. “Amour is becoming a popular wedding gift,” says Kerkar. Given its assortment of condoms, lube, an “outdoor sex guide,” massage oil, candy nipple tassels and even wet wipes, it is little wonder why modern India is choosing this box of goodies over the traditional wedding present of cash or housewares.

The store is also popular with honeymooners — no surprise, since Goa state is one of India’s top destinations for newlyweds and domestic tourists. “Newly married couples, especially from other parts of India, are surprised to find a store like this on the main street,” says Kerkar.

Some customers, though, hesitate to walk right in. “Some men will wait until other customers have left before they will say anything. Others are less inhibited — they will ask you anything,” Kerkar says. Groups of “housewives” come to the shop together. “For moral support?” I ask. “No,” Kerkar laughs. “They have so many detailed questions that all I can do is just sit back and listen, and wait for them to finish their questions.” This sexual awakening of India’s middle-class is long overdue. The National Family Planning Program first introduced condoms as a contraception method in the 1960s, importing hundreds of millions of condoms and selling them at a massively subsidized price.

Using condoms, however, has taken a while to become popular. For decades the burden of contraception has fallen on women in India, where most of the government's family planning budget is spent on female sterilization.

But health authorities have an urgent reason to push the use of condoms: HIV. With India home to the third-highest number in the world of people living with the virus, the National AIDS Control Organisation (NACO) set the goal that no one should ever be more than 15 minutes’ walk away from somewhere to get protection.

To this end, NACO installed more than 19,000 condom vending machines across the country from 2005-11. They sold far fewer condoms than predicted, however. By 2013, more than 10,000 machines had gone missing, and many of those remaining didn't work.

Just as crucial as making condoms available is changing people’s attitudes toward them. Here condoms carry connotations of casual or non-marital sex, so successive advertising campaigns have aimed to tackle embarrassment and promote condoms as a normal part of sexual health.

“Sex is no longer a dirty word in urban India.”

With the launch of a brand called "KamaSutra" in the 1990s, Indian condoms also got sexy: Now companies like HLL LifeCare — which is fully owned by the Indian government — produce flavored, textured and “climax-delay” condoms where the emphasis is firmly on pleasure.

Outside of advertising, though, opportunities for young Indians to hear about sex are limited. The last time a progressive government attempted to introduce nationwide sex education in schools, in 2007, 12 of India’s 29 states rejected the program on the grounds that it was too explicit for “Indian culture.” In 2014, the health minister suggested that the program be banned and replaced with compulsory yoga sessions. Today, sex ed courses remain a rarity in Indian schools.

Given this squeamish approach to sex, young people are getting their information instead from the internet and from Bollywood films, which are often relatively explicit. “Movies play a big role in creating awareness,” according to Kerkar. “Sex is no longer a dirty word in urban India.” The Moods Planet store he manages is one of three in the country; there is one in Trivandrum, opened in 2009, and since 2014 another in Kochi, both in the southern Indian state of Kerala. They are the only standalone condom stores in the country, and a novelty for a population starved of matter-of-fact information on sex. (To circumvent the residual embarrassment of purchasing a sex-related product in India, you can also buy Moods condoms online, delivered in “concealed” packaging.)

The staff at all three stores are trained to answer questions about sex, sexually transmitted disease and reproductive health.

“When a young customer comes to us, it is not my place to tell them what they should do,” Kerkar says. “I can only give them correct information and hope they use it.”

Whether they buy anything or not doesn’t matter so much. Because, according to Kerkar, “a customer never leaves empty-handed.”

“Even if they don’t buy anything, they will leave with information, which is always a good thing.”

More from GlobalPost: It’s still a crime to be gay in India. But activists are ready to celebrate