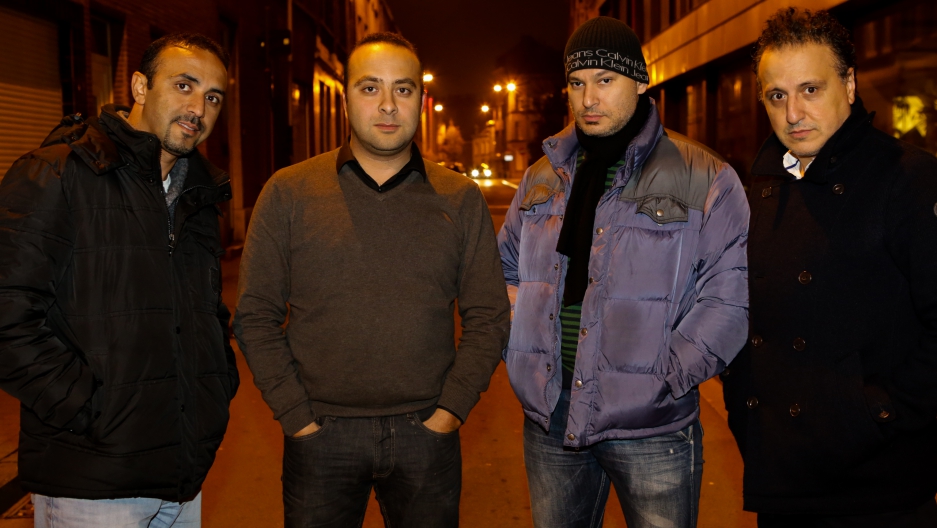 Playwright, actor and director Ismaël Saidi, second from left, outside a Brussels theater with the other cast members from his play "Djihad." L to R: Reda Chebchoubi, Ismaël Saidi, Shark Carrera, Ben Hamidou.

If Belgium has a terror problem, Ismaël Saidi says he has at least part of the solution:

The 39-year-old playwright grew up the son of Moroccan immigrants in Brussels. His comedy “Djihad,” about young Belgians going off to fight in Syria and becoming disillusioned along the way, has been playing to sold-out audiences for more than a year now. It opens in Paris next month.

Saidi was a police officer in Brussels for 15 years before turning to writing fulltime. He’s also an actor and director. (In “Djihad” he plays a character also called Ismaël.)

He knows the toxic influences that surround the young people in segregated neighborhoods in Brussels because he grew up in one himself. He remembers the imam at a mosque he attended as a kid railing against nonbelievers and exhorting youngsters to go fight alongside the mujahadeen in Afghanistan.

“I was going to the mosque as a young Muslim trying to understand who was God, where is he, and the imam is saying, you know, ‘as young Muslims you are useless here, you are living with nonbelievers, your brothers are dying.’

“You know, when you’re 15 and you’re looking for a model, you say, maybe that's it. There were (video)tapes and they put it on the recorder and we were watching all those guys fighting in Afghanistan like GI Joes.

“If you’re not good in your mind, you know, as a teenager, that’s a weird age, you’re looking for spiritual things to understand what you’re doing, you’re becoming an adult, but you’re not really an adult, your face is changing, you’re like a bowlful of emotions and they give you that and then it’s question of luck.”

Saidi counts himself among the lucky, partly because he got out of the ghetto early. When I ask him to show me a couple of landmarks from his life on a recent trip to Brussels, he takes me to the neighborhood where he started going to school when he was 14.

“It’s more like a fancy neighborhood,” he says, as we walk from the bookstore where we ate lunch toward his old school, the Athénée Royal Woluwé-Saint-Lambert.

“That was the first time I came to mix with other people. As a Belgian Muslim, I was in need of that, you know. To confront my ideas with yours, to say that maybe I’m not always right, maybe sometimes I’m wrong.”

Dusk is falling as he beckons me to the schoolgate and points out the athletic building and swimming pool and soccer fields.

He credits his father, a cab driver, with figuring out that he was entitled to go to this fancier (but still public) school, and that it would be good for him.

Saidi writes about all this in his new memoir, “Les aventures d’un Musulman d’ici,”  or “The Adventures of a Muslim From Here.”  He wrote the book because he was getting so many questions about his life from audiences who came to see “Djihad.”

It’s not out in English yet but I speak enough French to be able to read it with a dictionary by my side. It’s a funny, conversational, self-deprecating account of navigating multiple worlds — a Muslim who goes to a Christian school and hence church with his classmates, a first-generation Belgian who spends summers in Tangiers with his grandparents, a bookworm whose parents despair of him being able to run a simple errand to the store without getting lost in a daydream and forgetting what he went for.

Saidi says he wrote the memoir for his kids.

“The part of the story of being the kid of an immigrant, they will never know what it is and I think it’s a good thing to know,” he says. “You have to know your roots, where you’re coming from.”

When I asked him what sorts of stories he found himself telling, he answered, “Everything about Islam.”

In one memorable chapter he recounts how he learned to slaughter sheep at home for the Muslim holidays.

“When people read it, the non-Muslims were shocked,” he says. “‘You did that in your own house?’

“For the non-Muslims it was like I opened the door for them, like, ‘OK, come home. I’m going to show you what we are.’

Some of the most moving passages are his descriptions of the anguish he feels as a teenager, looking for answers about his religion and background, and fighting the prejudices he has inherited. In one scene he walks for miles at night, crying into the wind and rain, searching for solace. He’s devastated when an older student at the mosque tells him he shouldn’t be listening to his favorite singer, Jean-Jacques Goldman, because he’s Jewish. He almost throws the cassette out his bedroom window before he has a little chat with God and decides it can’t be wrong to listen to something so good.

“It was the first fissure in the thick wall of my certainty,” he writes. “The realization the world isn’t Manichean or binary or made up only of licit and illicit.”

When he finally reads the Koran, he’s shocked to discover various prohibitions he expected to find in the text weren’t there. And he begins to understand that doubt is part of faith, that he doesn’t need to accept an imam’s words at face value, he can think critically for himself.

Saidi gave a reading while I was in Brussels. During the Q & A, a woman got up and praised him for his open-mindedness.

“I am proud to be part of the same human family as you,” she told him. The audience cheered and clapped. For better or worse, this Moroccan-Belgian-police-officer-turned-writer has become a symbol of hope and integration in a country that hasn’t seen enough of either in recent years.

Saidi said he had mixed emotions listening to the accolades.

“I don’t think of myself as anything more than an artist who’s trying to tell his life,” he says. “I never ask myself what I’m doing. I’m trying to have fun.”

When I ask him about his use of humor, he shrugs.

“It’s the only thing that brings people together,” he says. “Laughing is a wonderful emotion. It’s the hardest one. It’s easy to make people cry; it’s not so easy to make them laugh. It’s a challenge for me. When you hear people laughing, it’s freedom, too. ISIS, they don’t laugh. That’s my weapon against them.”

He may trade in humor but he’s angry too. He says he wrote his play “Djihad” because he knew something bad was happening, even back in 2013.

He’s angry the Belgian government isn’t doing more to educate and create opportunities for young people and he’s angry that the Muslim community doesn’t take the violent extremism in its midst more seriously. “They always tell you it’s not Islam,” he says. “That’s not true! That’s the Islam we’re trying to do right now. So we have to change something in us. Something is wrong. Something is rotten.”

That’s why he wrote “Djihad.” He’s pleased that Belgian schools are now using it as a prevention tool to get kids talking about the dangers of radicalization and extremism.