The Irish language, like its people, has suffered greatly.

It has been used and abused by many: British colonialists, by the Catholic Church, and by Irish revolutionaries. The first two discouraged its use, associating it with poverty and primitive wildness. The latter co-opted the language as its primary symbol of nationhood and struggle against oppression.

When Ireland finally gained a degree of independence in 1922, its government brought Irish back into the schoolrooms.

This podcast episode talks to three people who studied Irish in the years since independence: Patrick's father who was taught Irish "by the nuns" in the 1930s and 40s; linguist Jim McCloskey, who fell in love with the language in the 1970s when he went on language summer schools in Ireland's Irish-speaking regions; and Iarla O'Halloran, who spoke Irish at home, then forgot much of it at school, only to pick it up again in the less formal settings of pubs and clubs of his college years.

"I was surprised by how much of it was actually stored within me, how much of came out when I wasn't nervous to speak it," says O'Halloran. 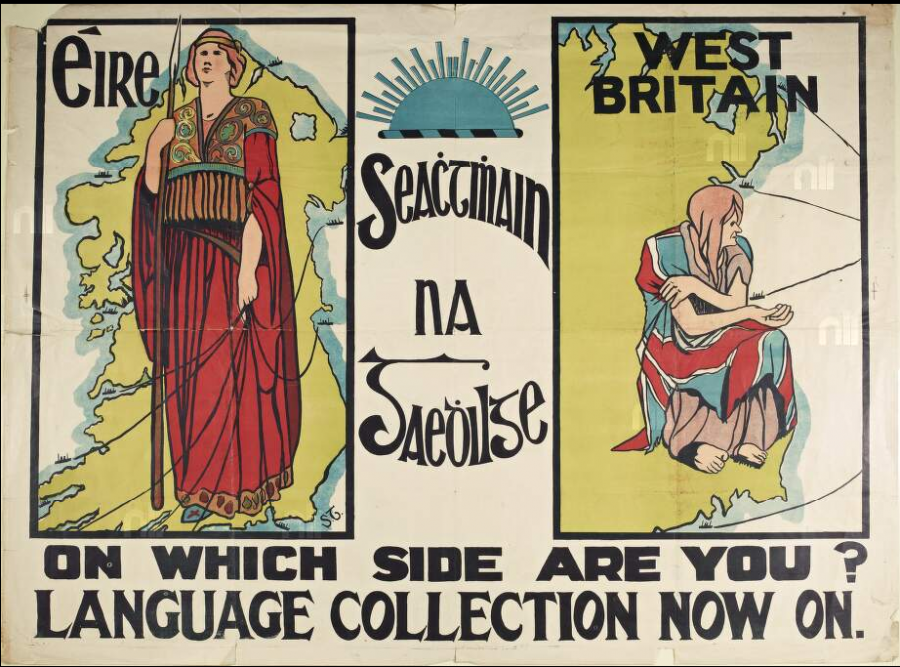 An Irish nationalist poster from 1913.

"There were expressions that I picked up [from Irish speakers] that I found hilarious. They'll all sexual ... .Just hearing how the lads from Connemara, when they would see a good-looking woman on the street, how they would describe it. ... It was hearing laddish banter that made me realize that the language could be a bit more than I thought it was."

We also hear from a research project at UC-Santa Cruz that is documenting Irish pronunciation with the help of ultrasound imagery.

0:10 My father learned Irish in a new nation.

1:42 "There was an enormous psychological resistance to learning the language"

4:10 The crucial initial moment in the decline of Irish.

5:20 How the Catholic Church helped the colonial government drive the language to the fringes of society.

6:30 "A generation has to come to believe that their language is a burden."

9:50 Jim McCloskey summers in a Gaeltacht, an Irish-speaking region.

14:35 "There was an ideological aspect" to the Irish language curriculum in schools.

19:00 Jaye Padgett explains the consonant pronunciation project that he's working on with colleagues at UC-Santa Cruz and University College, Dublin.

21:50 Language purists message to the new urban Irish: don't mess with the language.

22:50 A new perspective: the role of Irish in the global context of the loss of linguistic diversity.

Music heard in the podcast

24:00 Stiofán Ó Fearaíl sings an Irish language version of the Aviici song, "Wake Me Up" The video features students at the Coláiste Lurga in Indreabhán, County Galway.