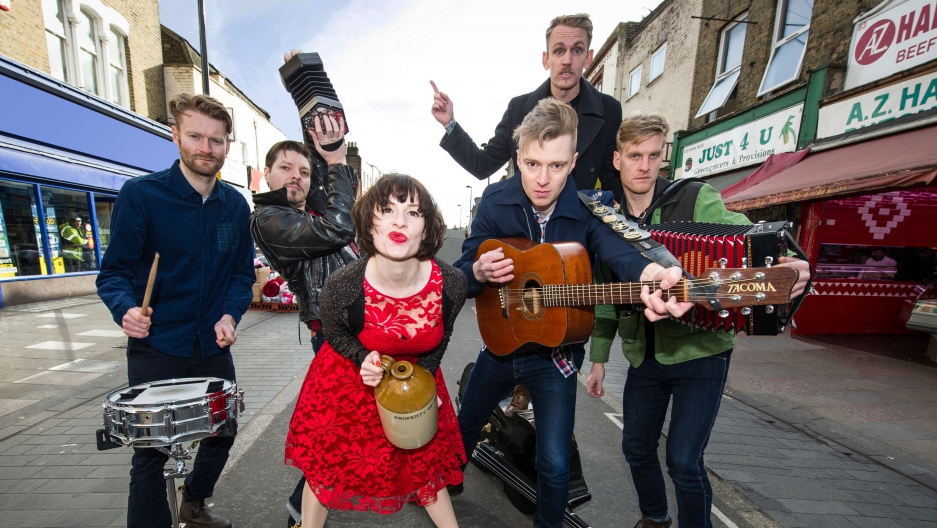 British group Skinny Lister is the most danceable Irish punk group I've ever heard. Check them out a little later on the list.

I didn't know what I was getting into when I began making this playlist.

I thought it would be easy. I would round up a few Irish punk bands, slap them on a list and be done with it.

Instead, I've taken a crash course in modern Irish punk — including the history, music theory and culture around it. And all of it was thanks to you — the readers and listeners who responded to my cry for help.

I received hundreds of submissions, and I listened to every one.

One thing that really stood out was how Irish punk as a style of music has changed. It's become so much easier to identify other styles of music and inspirations within the distinctive sound so many of these bands share.

At the same time, punk in the country of Ireland has also changed. Many of the recommendations I received were bands that were playing punk in Ireland, but didn't sound anything like the Dropkick Murphys or the Flogging Mollys.

And after listening to hours of the two, I realized they really complement each other.

So in no particular order, here's a new type of St. Patrick's Day playlist, that combines the powerful style of Irish punk with the freshness of the punk scene thriving in Ireland. Please note, some of these songs may contain profanity, but did you really expect anything else?

There's no better way to start this list off than with a band who is named after the Easter Rebellion, which was a century ago this year.

1916 has been around for a decade in the Rochester, New York, area, and there's a lot to like about them. What I like the most, though, is a small detail one of their fans told me. They said that Chris VanCleve, who plays upright bass, doesn't really play the bass as much as he attacks it. In fact, they said, it's not unusual to see his hands bleeding by the end of the band's gigs.

I can't tell what I want more. To listen to this band — or to be them.

They have a new album out next month, and recently dropped a video for a single off of it called "Love No One." The video for it is like a creepy modern-day Snow White.

Although Snow White was pretty creepy as it was, am I right?

This is digging back into Irish punk archives a bit, but not really. Stiff Little Fingers is celebrating its 25th anniversary, but released an album in 2014 and still tours constantly. They're a key part of Irish punk past and present.

"Alternative Ulster" is by far their best-known song, and there's a reason for that. I guarantee it'll make you want to start a mosh pit, wherever you are.

Get ready for a weird one.

I love this song so much, because it hits on a lot of common themes in Irish punk — dysfunction, drinking and an undying love for where you came from. But the way you hear the lead singer talk about it is so expressive and — although the subject isn't lighthearted — so funny. Monkey sounds and all.

The Tosspints, "Whiskey Be My Savior"

One of the things you realize early when you begin looking into Irish punk is that no one can agree on the actual genre.

That said, The Tosspints earned my favorite alternative description, which was "aggressive folk."

They have a really cool backstory, too. Many of their songs have to do with loss and pain, much of which seems to stem from their lead singer's background. Don Zuzula, who also plays guitar for them, is a veteran of Operation Iraqi Freedom. "Whiskey Be My Savior" is fun and fast, but you should listen to "Hollow Man," to really see their range.

The Go Set, "Drums of Chelsea"

Irish punk, as a genre of music, is spread all over the world at this point. This band is a good example of that trend, because they're based in Melbourne, Australia.

This song is So. Freaking. Dancy.

One gem about this London-based group is that they have a group of costumed women called "The Skinny Sisters" who come out to their gigs and dance with the audience.

Want to see for yourself? Well if you're in the US, you may be in luck. They just started a US tour today.

Whiskey of the Damned, "Shutdown"

I have such a soft spot for this band.

When I put out a call for submissions, this group was by far the name I saw the most. In fact, their fans had so much to say about them, that I actually reached out and talked to their fearless leader, Eoin McCarthy.

He has a pretty crazy story — which includes getting guitar lessons from Van Morrison — but not knowing who he was.

You really didn't think I wasn't going to put The Pogues on this list?! C'mon.

I don't think it would be a stretch to say that none of these artists would be where they are today if The Pogues had never come together.

Depending on who you ask, the group's founder, Shane MacGowan, is either a musical genius or a bumbling addict. Regardless though, this band created a lot of the foundation that musicians spread all over the world have built upon.

That's all folks. You should all know that I really will love all of you until the end.

A big thanks to everyone who sent in submissions via Tumblr, Twitter and any other way you got in touch with me. Specfically thank you to Yan Bourke, who I couldn't have done this piece without. Check out his work here, here and here.

There are plenty of bands who aren't on this list who are still in the playlist. Take a listen, and let me know if I left anyone out. Cheers!