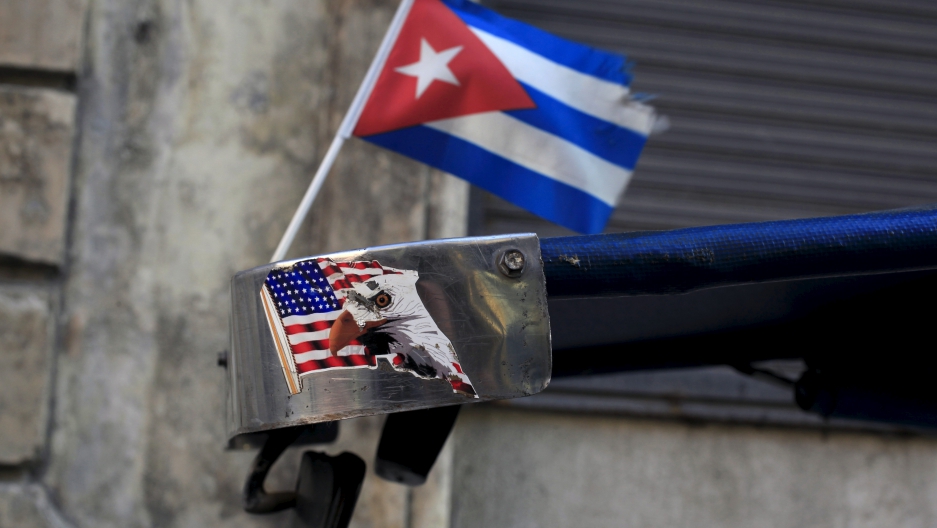 A Cuban flag and a sticker of a U.S. flag are seen on the roof of tricycle taxi in Havana March 9, 2016.

President Barack Obama is about to do something a sitting US president hasn't done in almost 90 years, when Calvin Coolidge was president. On Sunday, March 20, Obama will set foot on Cuban soil.

But more than many nations, the relationship between the US and Cuba is both exceptionally complicated and particularly important. There are some 1.8 million Cuban Americans, and more than 1.2 million of them live in Florida, where Cuban developments are considered local news. But for the rest of the country, the relationship with Cuba is a little more abstract.

But Obama's visit is also the climax of a string of events, starting with the failed Bay of Pigs invasion, that could lead to significant trade and immigration policy adjustments between the US and Cuba, which could have far-reaching influence across the US.

For 50 years, Cuban immigrants have arrived at the US to find an immigration system that welcomes them at the border and offers permanent residence after a year in the country. It's the most direct path to legalization the US offers, and it's offered only to Cubans.

These benefits come from the Cuban Adjustment Act, enacted in 1966 and amended in the '90s to restrict benefits only to those migrants who reach US soil. That's how the law became known as the "Wet Foot, Dry Foot" policy.

Its roots are in the Bay of Pigs invasion five years earlier, when CIA-trained militants tried and failed to invade Cuba and depose Fidel Castro. It was the Red Scare. Cuba was our closest communist neighbor. So the Cuban Adjustment Act was passed, and allowed the Cuban American population to bulge in the US.

The Cuban exile community is well represented, politically and culturally, in the Miami metro area, as well as in Florida's state legislature and in Congress. They're the fifth-largest ethnic group in the US, even more important in Florida.

Havana's colonial-style buildings are crumbling. Cubans have housing and food but little money, earned partly from government-assigned jobs. The island's signature mid-century cars roll along its cobblestone streets and highways rife with potholes.

For decades, the Castro government has blamed the US trade embargo with Cuba on the island's economic woes. Tourism is thriving in Cuba, though, thanks to visitors from Europe and the rest of the world.

After Obama in 2014 announced the rekindling of diplomatic relations with the island, Americans were granted permission to travel there for 12 specific purposes, tourism not one of them. The restrictions were further loosened this week, ahead of Obama's vist. Since the announcement, American businesses have wanted to break into the Cuban market.

This week, the Obama Administration also announced it would allow Cuban citizens to earn American dollars from American companies, which, along with restoring direct commercial flights between the countries, is arguably the most significant change in policy yet.

There have been several announcements of this kind since December 2014, but the largest restriction in US-Cuba policy remains the trade embargo, which actually predates the Cuban Adjustment Act and predates even the Bay of Pigs invasion. It was meant to force the nation away from communism, but the Castro regime remains.

Most Republicans in Congress — some Cuban American — support keeping the embargo, meanwhile Cuban officials insist must be dissolved.  Conservative exiles in the US, mainly in Miami, want the embargo to stay in place.

But part of a new generation of Cuban-Americans sees a broken policy that hasn't achieved its goal — to get the Castros out of office — and would like to see the embargo reversed.