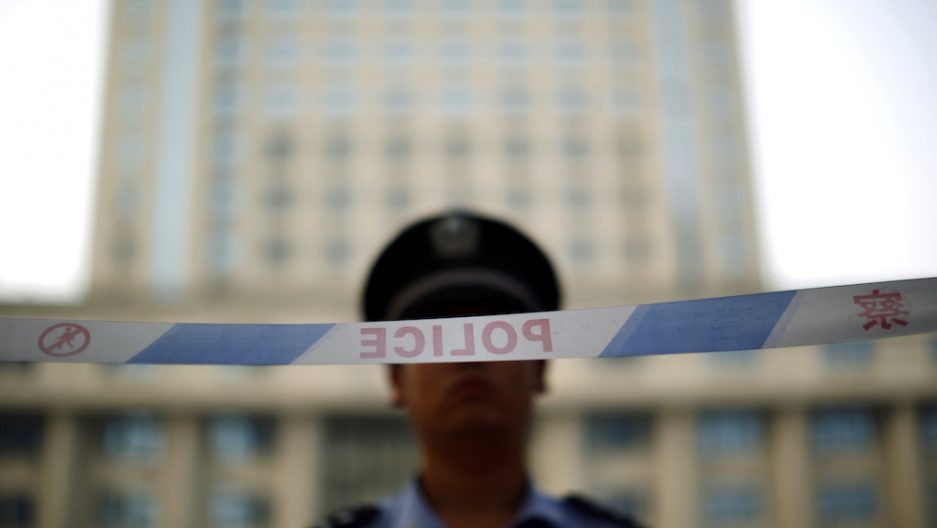 BEIJING, China — Neighbors didn’t even hear the shots that killed Judge Ma Caiyun. They came from a modified ball-bearing gun, wielded by one of two men who broke into the judge’s house, then fled in panic, firing at both Ma and her husband as they chased the intruders.

Ma, 38, was hit in both the stomach and face and died at the hospital. Her husband, a court officer, was saved by his belt buckle, according to a Beijing news report. The attackers — one of whom knew Ma from court, where she had recently ruled on his divorce settlement — killed themselves after a police chase.

Ma’s murder has sent shockwaves through the Chinese legal community and again cast question on President Xi Jinping’s promise to strengthen the rule of law in China.

It’s not just that the slaying took place late at night in a quiet residential suburb of China’s famously safe capital. Nor that it occurred just days before Lianghui, or “Two Sessions,” the Communist Party’s annual gathering of its rubber-stamp parliament, when security is so tight that simply accessing overseas websites becomes a painful chore.

The tragedy has come at a time of intensely low morale for the legal profession. In the last year, rights lawyers have been arrested and forced to make televised confessions for crimes they haven’t been charged with. A proposed law that threatens to criminalize any conduct deemed “disruptive” to courtroom order has further cowed those seeking to defend clients from politically charged prosecution.

The dramatic killing of a respected district judge seems to drive another nail into the coffin of a legal system already beset with strife.

Many judges now live in fear of such personal attacks, which have become frequent and sometimes fatal in recent years. In a single month in 2010, a trio of judges were killed by a gunman in Hunan province and another two were attacked with sulfuric acid in Guangxi province. Last year, four judges were stabbed in a courthouse in Hubei. In 2006, a man detonated a suicide bomb at a Gansu county court, killing himself and four others.

In each of these incidents, the perpetrator has been someone seeking extrajudicial redress. The gunman in the Hunan case, for example, specifically mentioned his dissatisfaction with the outcome of a legal dispute in a letter he left behind (he, too, committed suicide after his rampage).

In Ma’s case, the principal attacker was enraged by the division of property in his divorce and had bludgeoned his ex-wife’s husband to death earlier that evening.

“When the public lose confidence in the independence of the legal system and think the judge is biased, they are likely to hold a grudge.”

But what sets Ma’s case apart has been the public reaction. Among those who mistrust the law, men who rebel against it are traditionally accorded folk-hero status.

Consider the infamous case of Yang Jia, an unemployed 28-year-old who, after alleging brutality by officers who interrogated him for riding an unlicensed bicycle, laid siege to a Shanghai police station in 2008 with Molotov cocktails and a knife, killing six cops. While prosecutors called him a stone-cold killer, motivated by “premeditated malice and thorough preparation,” on the internet Yang was lauded as a man of the people and compared to Wu Song, a hero of classical Chinese literature who wrestled a tiger with his bare hands.

Little such solidarity was expressed for the men who killed Ma. She was by all accounts regarded as an upstanding member of her profession; an official announcement by the Supreme People’s Court (since removed) praised her work ethic — she heard nearly 400 cases a year — and encouraged peers to “learn from Judge Ma.”

Legal commentators, however, were quick to pour scorn on the tribute’s tone. “Judge Ma Caiyun is just a cog in the massive machine of law,” scoffed Wu Danhong, a professor at the China University of Political Science and Law, via microblogging site Weibo. “Asking all judges to ‘learn from her’ is, in other words, showing approval of and promoting this sick system and working style, which will pull more and more judges under its ruthless wheels.”

Chinese judges have been leaving the profession in droves, most saying they are fed up with long working hours, poor pay and constant political interference. Although the threat of being assaulted by a disgruntled plaintiff has always been a part of any judge’s lot, many feel that the position commands little respect in modern Chinese society.

“These judges, even if they are not avenged by the defendants or plaintiffs, will be exhausted to death by their jobs,” Wu wrote in his post. “I hope the Supreme Court can truthfully protect our judges. I also want society to see that, without law as the bottom line of the truth, no one’s rights can be protected.”

More from GlobalPost: Desperate Chinese are turning to mass suicide to get their government's attention

Beijing has responded to the outcry by drafting new directives to ensure the safety of court officials — although one prominent lawyer told the South China Morning Post that the underlying problem lies with a widespread perception that justice in China is far from blind.

“When the public lose confidence in the independence of the legal system and think the judge is biased, they are likely to hold a grudge,” the newspaper quoted lawyer Wu Youshui as saying.

But the Chinese Communist Party’s understanding of “rule of law” appears far removed from what those like Wu would wish. Rather than advancing the tenets of impartial justice that have underpinned Western legal systems since the days of Magna Carta, President Xi has reached back to China’s ancient past and the ghost of Legalism — a philosophy which dictates a strict, often brutal code of discipline to ensure absolute rule.

“When those who uphold the law are strong, the state is strong,” Xi has approvingly quoted Han Fei, a philosopher whose teachings first shaped Legalism two millennia ago. The problem? In Chinese history, almost all those officials who upheld Legalism have ended up being subject to it, their ruling dynasties collapsing swiftly after.

For those nearing the bench, the future now looks as tremulous as anyone facing it. “For the upcoming judge training, I don’t look forward to it,” Li Can, an aspiring judge, wrote on Weibo. “Learning law all these years has been so I could be a stone on the path to building rule of law. Seeing the awkward situation of justice in reality, Judge Ma’s tragedy chills me.”