Women gather to meditate at the Metta Health Center in Lowell MA.  Many of the patients seek meditation, and other traditional forms of Cambodian healing, to deal with headaches, insomnia, and other symptoms of PTSD.

Doctors at a health clinic in Lowell, Massachusetts, had a problem — their exam rooms reminded refugee patients of torture chambers. The stethoscopes, the blood pressure cuff squeezing your arm — they looked like the torture devices used on their families, during Cambodia’s genocide.

Sonith Peou was just 24 when the Khmer Rouge pounded on the door of their family home, and took his father away for execution. Now 63, he’s a program director at the Lowell Community Health Center and he understands why a visit to the doctor’s office can feel traumatic for Cambodian refugees. For some, he says, simply being left alone in a room and waiting for a doctor could cause anxiety.

“When we have patients here, we usually don’t close the door all the way. Because especially for people who have experienced torture, it’s to make them feel like they’re not sitting in the cell,” he shares. 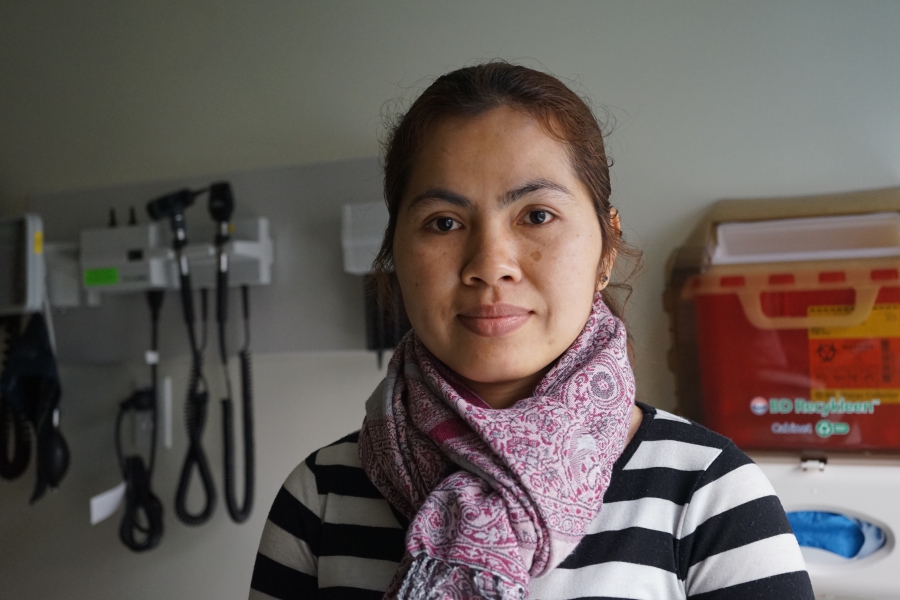 Socheat Chan refuses to take Tylenol or Advil for headaches – she opts instead for a traditional treatment called coining. Pictured in the background are the types of medical devices that some Cambodian refugees would mistake for torture devices used on their families during the country’s genocide.

So the health center adapted. They opened the Metta Health Center, a department dedicated to caring for Southeast Asian refugees. They built a meditation lounge, and invited a robed Buddhist monk and a traditional Cambodian healer to consult with their clinical team. In the early years, they often performed age-old therapies like cupping, coining and acupuncture in their exam rooms. They hired new staff — refugees themselves — and lined the walls with Cambodian art.

It was the kind of artwork that had been destroyed in the 1970s, when the Khmer Rouge took over Cambodia’s government and drove millions of citizens to walk by foot to labor camps in the countryside, where they were routinely tortured and starved to death.

When thousands of Cambodian refugees were relocated to Lowell in the 1980s, many weren’t sure whom to trust, including the doctors in white lab coats, who were ready to treat their PTSD. That’s what drove the MettaHealth Center to a different approach.

A patient lies on an exam room table at the Metta Health Center, receiving cupping therapy. Cupping is a centuries old treatment, in which flame-heated glass cups are attached to your back, and then popped off leaving red round circles.

A patient lies on the exam room table, fluorescent lights dimmed overhead. In a process called cupping, flame heated glass cups are attached to a patient’s back, and then pulled off, leaving round red circles. The pain that fights the pain, they say.

Another patient, Socheat Chan, 35, was born in Cambodia and came to the US as a young woman. She turns to a traditional therapy called coining for headaches, to manage the stress of being a single mom and caring for her aging parents. Socheat pulls a quarter from her purse, and shows me how to rake a lubricated coin across your shoulders and back, leaving tiger red stripes.

“I feel like not heavy on my shoulder anymore,” she says, smiling widely. “I don’t need to use Tylenol or Advil. I think it’s the best medicine for me.”

Coining is a treatment in which a lubricated coin is rubbed across the shoulders and back, leaving tiger-like stripes. It’s routinely used to treat things like headaches and indigestion. Marks of coining are seen here on a Metta Health Center staff member.

Some of Metta’s staff, who are Cambodian American, regularly coin themselves. Others on the team doubt its medical efficacy — it could be the placebo effect at work. But they agree on one thing: They’re reminders of what life was like back home.

And sometimes it's enough to help patients consider other options, like talk therapy and medication. Eventually, most find that telling their stories — and being heard — does help.

Bonnie Chan joined the center’s meditation sessions just after 9/11. She’d just lost her job as a factory worker on an assembly line. “I know that I am suffering," she admits softly. "Sometimes I cannot sleep the whole night.”

The stresses reminded her of a very different life in Cambodia, when she was a student at the country’s top university. She laments, “In 1975, I was still a student at Phnom Penh University in Cambodia. But I did not finish it yet. So the Khmer Rouge take place. ... And I lose everything.”

Being identified as an intellectual — even just wearing glasses — was cause to be sent to forced labor camps. She survived, but three of her brothers didn’t. She uses the word “yet” to describe her unfinished studies, as though at age 64 she plans to return. Now she battles osteoporosis and some nights, she says she doesn’t sleep at all. 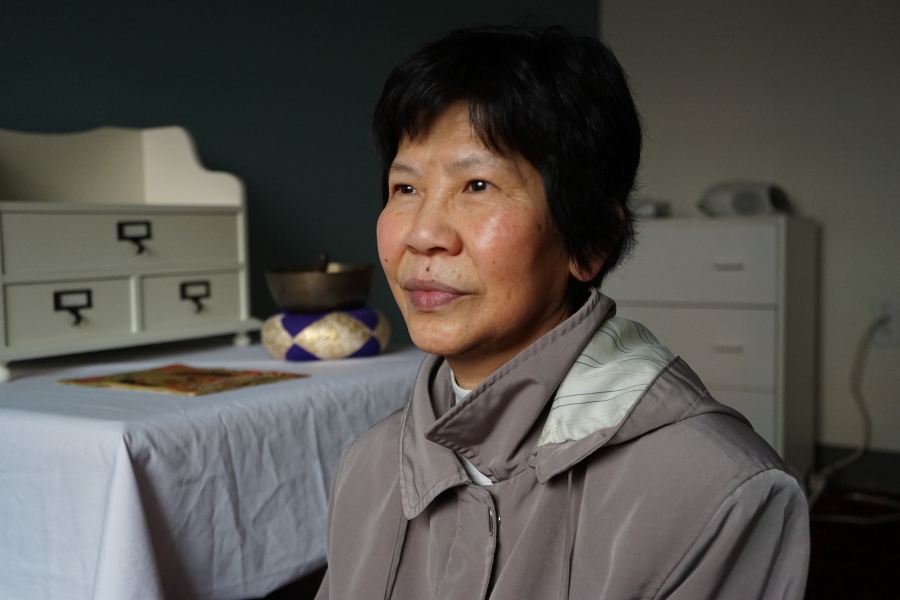 Bonnie Chan, age 64, was a university student when the Khmer Rouge sent her to the forced labor camps in Cambodia. She survived, but lost three brothers. She uses meditation to treat her insomnia, but often finds her meditation interrupted by unwanted memories.

She sits cross-legged, shrouded in a white sheet, womb-like, as the group chants in a melodic monotone. The room is filled with rows of soft red Persian style rugs, gifted to the clinic by a local temple. Bonnie finds meditating here helps. But sitting in silence, for trauma survivors, can be hard, too.

She admits, “Because our mind is sometimes — it’s wandering. Sometimes it’s wandering a lot. It’s called the monkey mind. The past sometimes I think about the life in the Khmer Rouge, and when that happen...” She pauses and her voice wavers, before she continues. “I become sad. But we have to learn how to live, how to live in the present.”

After the meditation session, patients are ushered to the conference room next door — to debrief, alongside the center’s staff. The thoughts that interrupt their meditation are often the things they could use help with.

Even their daily lives trigger unwanted memories — a random sound or a particular shade of color can cause panic. Making it hard to get to work, to pay the bills or respond to their kids’ needs, who were often recruited into Lowell’s gang warfare and crack epidemic. They escaped the Cambodian genocide, but found it hard to feel safe.

Since losing her job, Bonnie spends her days ricocheting between the fitness center at the senior center, and her meditation sessions. The days the snow keeps her from leaving the house, she lifts jugs of milk at home. She says it’s essential to keep moving.

Each year, as the New England winter sets in, doctors anticipate the onset of depression and anxiety for those who come from warmer and brighter places. Sonith, the center’s program director, hosts a local cable access show to offer tips for surviving. He explains the tradition of Christmas lights, charter buses for group outings and encourages those who can’t work to volunteer — to give them a sense of purpose.

A painting of a Cambodian temple, which hangs on the walls of the Metta Health Center. The clinic is filled with Cambodian artwork, which has been haggled for in the markets of Phnom Penh.

“The winter will pass, and springtime, hope is just around the corner,” Sonith insists.

In fact, at the heart of the center’s is its ability to make people feel at home. One elderly man came routinely, even without an appointment, just to sit and read the Cambodian newspapers in the lobby, and to watch the video in the waiting room.

The video shows sweeping panoramas of US national parks — the kinds of places you’d go on a great American road trip. But the clinic’s walls are lined with pictures of Cambodian temples and dancers, from the markets of Phnom Penh. The smell of fried rice noodles drifts from the staff lunchroom and ceiling fans spin overhead, resembling a home in the tropics.

But where people call home has changed over the years, as Lowell has welcomed new refugees from other parts of the world. So, now with funding from the UN Voluntary Fund for Torture Victims, the Metta Center is offering health screenings for those who have just arrived, from places like Iraq, Congo and Somalia.

Some of these patients are more ready than others to share stories from their own country’s wars. And the health center’s staff — who can’t forget what life was like when they first arrived as refugees — they’re ready to help these newcomers, to also feel at home.

This story was produced with the support of the Images & Voices of Hope Restorative Narrative Fellowship.