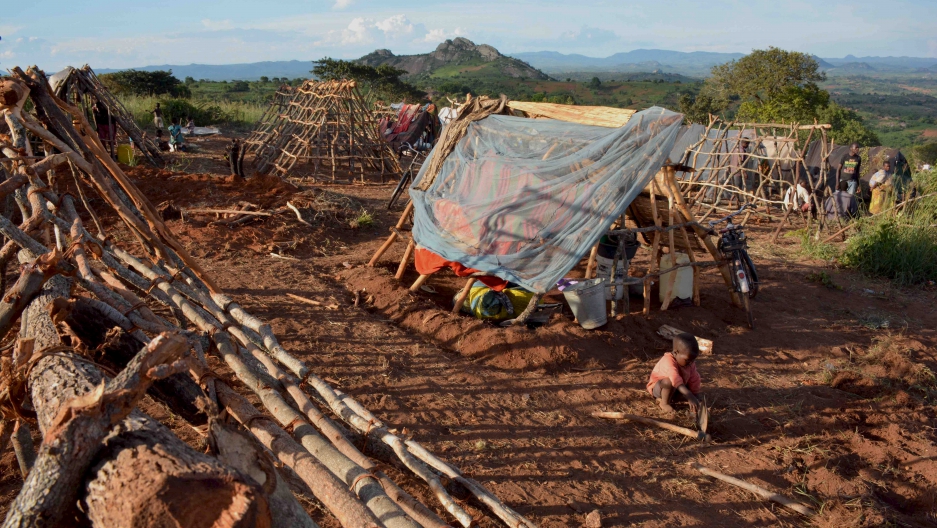 A Mozambican child plays with a hoe outside a makeshift shelter at Kapise camp in Malawi's Mwanza district January 18, 2016. Thousands of Mozambicans have fled across the border to refugee camps in Malawi in the last month, saying Mozambique's Frelimo government forces are burning homes and killing civilians in a campaign against Renamo guerrillas in an escalation of a simmering conflict between old civil war foes. Spokesmen for both Frelimo and Renamo each told Reuters that the other side was responsible for attacks on their members in various parts of the country but would not give details about the violence that prompted the refugee exodus.
Credit: Eldson Chagara
Share

In recent years the country appeared to be defying its traumatic past. Left badly scarred by colonialism and 15 years of civil war, Mozambique has enjoyed political stability and rapid economic growth thanks to valuable deposits of gas and coal.

But long-simmering tensions between former rebels and the government have taken a worrying turn. Escalating fighting and allegations of human rights abuses have prompted warnings of a return to war.

There are now regular attacks by gunmen along Mozambique’s main north-south highway. More than 10,000 refugees have fled to neighboring Malawi, fearing reprisals from the military. And the leader of Renamo, the former rebels turned political opposition, has declared he will seize control of six provinces this month.

The International Crisis Group, a Brussels-based nonprofit, has added Mozambique to a list of countries with “deteriorating situations.”

Mozambique, a former Portuguese colony, was left battered by a civil war between Frelimo, the liberation party that still governs today, and Renamo, a rebel group backed first by neighboring Rhodesia (now Zimbabwe) and then by apartheid South Africa.

While the country remains one of the world’s poorest, Mozambique has seen economic growth at near 8 percent — making it among the fastest-growing economies in Africa. That's mainly due to oil, gas and coal discoveries in the north.

But political tensions have persisted. The country, which has struggled with wildly unequal growth, had no process of reconciliation after the war, which ended with a peace agreement in 1992.

Renamo’s leader, Afonso Dhlakama, decamped to the bush in 2012, accusing the government of breaking the peace deal and complaining of an unfair concentration of power in Frelimo’s hands. He then led a two-year, low-level insurgency from his hideout in the Gorongosa hills of central Mozambique, before emerging to run in the October 2014 elections.

Disappointed by the results, Dhlakama has once again returned to the bush and urged Renamo fighters to take up arms. He is threatening to grab control of six provinces in central and northern Mozambique where he claims Renamo won elections.

More from GlobalPost: Mozambique could elect 'Rambo' as the country's next president this week

Renamo gunmen are accused of being behind deadly attacks along major highways, as well as on police and army camps. In one recent incident, a driver and passenger were killed when their bus was attacked on a road near the border with Zimbabwe, an incident police blamed on Renamo.

Dimpho Motsamai, a researcher with the Pretoria-based Institute for Security Studies, said that while there are doubts Renamo has the military and financial means to sustain a war effort, the conflict could render Mozambique ungovernable.

"Government can no longer afford to dismiss the threats as mere warmongering," she said.

Rights groups are also worried about the response from Mozambique's security forces. In October 2015, the army began a campaign to disarm militias linked to Renamo, escalating the conflict.

More than 10,000 Mozambicans have fled across the border to a makeshift refugee camp in Malawi, fearing reprisal attacks from the armed forces. Some say they fled because they are accused of being Renamo members and had their homes burned to the ground.

The New York-based group Human Rights Watch has reported claims of summary executions and abuse, including sexual abuse, by the army in Tete province.

“The Mozambique army cannot use the excuse of disarming Renamo militias to commit abuses against them or local residents,” said Zenaida Machado, the group's Mozambique researcher.

Dhlakama has refused to meet with Nyusi, and recently demanded that the European Union, Catholic Church and South African President Jacob Zuma agree to act as mediators — before discussions about talks can even begin.

More from GlobalPost: Mozambique's got some of the best bad taxidermy you'll ever see