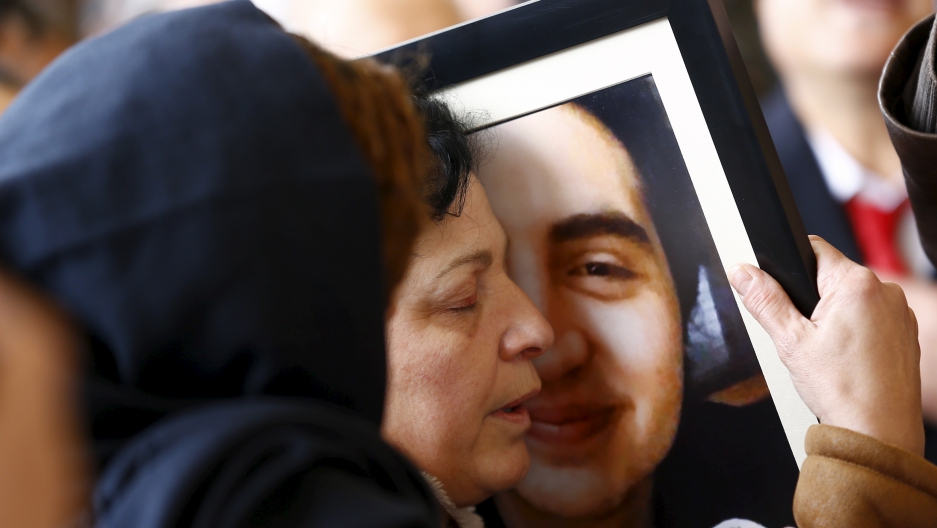 A relative of Elvin Bugra Arslan, one of the victims of Sunday's suicide bomb attack, holds his picture during a funeral ceremony in Ankara,

The bomb blast crater has been repaved, and hundreds of people crowded the bus stops early this morning on the street in Ankara where a bomb exploded last night, killing 34 people and wounding more than 170. But across the six-lane Ataturk Boulevard, tall white sheets fluttered, blocking access to a line of hi-rise office buildings, their windows shattered by the force of the explosion.

It's grim in Ankara, the pain and the confusion almost tangible.

I can see it in the groups of people gathering to talk in parks, in the heartbroken and sometimes angry messages on Facebook and Twitter. In seven cities, thousands of Turks took to the streets after yesterday's explosion to protest against the government’s failure to prevent more terror attacks. In Istanbul, riot police dispersed the protesters with water cannon.

On Facebook, a posting saying that the Ankara attacks deserved the same world attention as the Paris ones, went viral as a new “Je suis Ankara” movement.

Turkey’s terrorism problems at home stem both from the Syrian war, a conflict that has metastasized, as well as the reigniting of a war between Turkey and the outlawed Kurdish Workers Party or PKK, a homegrown separatist group considered a terrorist organization by the US and the European Union. The Turkish government has said they believe one of the Sunday bombers was a young PKK woman.

Yet for all of Turkey's troubles, it has generously accepted 2.5 million refugees, is still an island of stability in the region, and remains one of the most democratic and economically-advanced secular countries in the Muslim world. But there is a deep ideological divide between the westernized city dwellers and the large numbers of more religiously conservative Turks living in the countryside, who are strong supporters of the AKP ruling party.

The evening of the bombing, Abdulkadir Selvi, a conservative supporter of the AKP who writes for the daily “Yeni Safak” said on television: “Turkey should get used to living with terrorism for some time.” Many people here believe this.

In hospitals and at the morgue, families lashed out in pain and anger. In this video a man accuses the government of inaction. “I want to stick a knife to your authority, to your power, to your ambitions, to your plans.”

Ankara is my city. On Sunday evening I was cooking dinner when the blast, more than a mile downhill, shook our windows.

“It’s an explosion,” I told my 11-year old son, who thought it was thunder.

Kizilay Square, close to Guven Park, is the capital’s Time Square, where the city has its largest New Year’s Eve celebration. It is a bus and metro hub. It is Ankara’s hip locale, full of coffee houses, movie theatres, language centers, business offices, and a chic mall across the street. Ankara could easily be a city in Europe.

But were there security lapses? This is the third terrorist bomb blast in Ankara in five months. Last October, 103 people were killed in a double suicide bombing at a political rally. The chief of police was sacked after that attack.

On February 17, 29 people were killed by a car bomb, most of them military. The acting police chief was removed.

This Sunday’s blast at a bus and metro stop was clearly aimed at civilians. I drive through there regularly and it is easy to imagine that I could have been there.

The Hurriet newspaper has reported that the government had appointed a new police chief in Ankara. Mahmut Karaaslan, police chief of the eastern Van Province, started work today.

Of the many stories of loss in Turkey, here is one that will stay with me:

Ozancan Akkus was a 19-year-old from Gaziantep, a city on the Syrian border. He came to Ankara to attend boarding school and was studying engineering at Ankara’s Middle East Technical University. He was on a bus in Kizilay and was killed Sunday night, returning home from tutoring younger students, according to this newspaper account:

"It is not easy for a 14-year-old coming from the rural districts and be by himself in a big city,'' the newspaper quoted a friend as saying. "That young man succeeded; he made it ... [until] the damned bomb found him."

Akkus had a best friend from childhood, and an image of the two of them has been shared widely on Facebook.

That friend, Ali Deniz Uzatmaz, was killed in the October bombings at the Ankara train station.