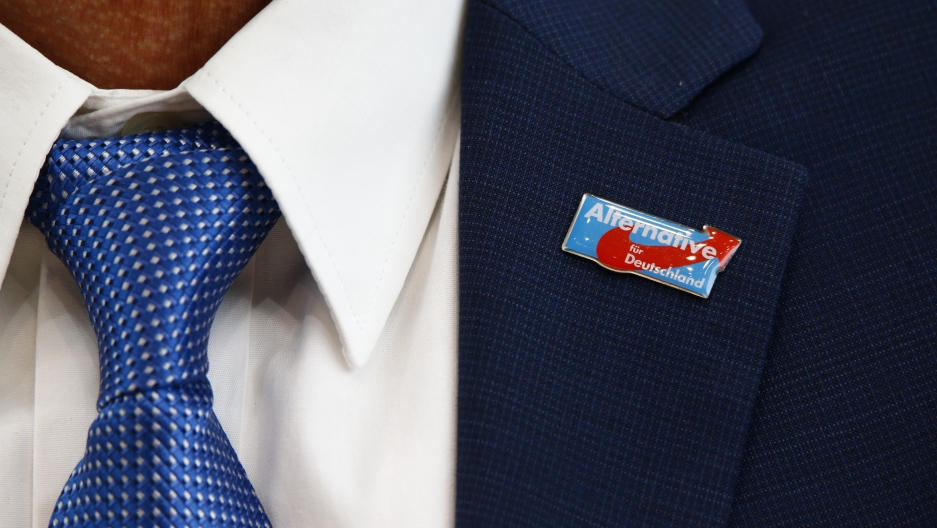 A badge of AfD is seen on the jacket of Uwe Junge, candidate of the anti-immigration party Alternative for Germany in Rhineland-Palatinate at a news conference in Berlin, Germany, March 14, 2016.

The world continues to wonder what's next in the chaotic US presidential election, but it might be time to focus on the growing nationalism in Europe.

Frauke Petry is gaining influence in German politics. She’s the head of Alternative for Germany, a right-wing nationalist party, and the group delivered a big upset to Chancellor Angela Merkel's Christian Democratic Union (CDU) party in regional elections over the weekend.

The party, known as AfD, started in 2013 to protest greater integration into the European Union and the bailout of Greece, but its main issue now is opposing migration to Germany.

So far, Merkel has insisted that Germany's borders remain open, while Petry called for German soldiers to fire on migrants, if necessary, in order to stop them from crossing the border. More than 1 million refugees, many of them from Iraq and Syria, registered in Germany last year.

“We’ve seen the rise of right-wing nationalist parties throughout Europe,” says Rieke Havertz, editor and writer for TAZ, a leftist German paper based in Berlin. “We’ve been trying to be aware of our history, and I think we’ve thought we’ve been handling this very well, but the rise of the AfD apparently shows that a lot of people are afraid and that this a very emotional topic. It is not a big surprise for a lot of people who are watching this closely; that the AfD is so successful now.”

Like Donald Trump here in the United States, Petry’s right-wing stance is attracting a lot of disenfranchised voters.

“People are moving towards the AfD from multiple angles,” says Havertz. “It’s the non-voters, frustrated conservatives — even left-wing people are voting for them. It seems to be that the party establishment in Germany is kind of deteriorating. Merkel and her party, they have to find an answer for that.”

Though the AfD has gained some ground, Merkel will not be changing her position of refugees, something Steffen Seibert, a German government spokesman, made clear on Monday.

“The German government will continue to pursue its refugee policy with all its might both at home and abroad,” Seibert said, according to The Guardian.

As the German chancellor seeks to build momentum among E.U. leaders for a multinational solution to the refugee crisis, Havertz argues that the election results could complicate things for Merkel.

“The results for the Alternative for Germany party last weekend is definitely a setback for the politics,” she says.

Turkey and the E.U. have tried to strike a deal on the refugee crisis, but to Merkel’s dismay, an agreement wasn’t reached before the election.

“Apparently it hasn’t helped her,” says Havertz. “I think that was kind of her plan — to reach an agreement with Turkey prior to the elections to signal to the voters, ‘We’re doing something about this and we are listening to the fear you’re having about the huge amount of people coming into this country.’ But because she didn’t achieve this deal, I think a lot of people are frustrated and disappointed in our big parties, like Merkel’s party, and the center-left party, the SPD, so they’re looking for alternatives. Apparently the AfD ... seems to be an alternative for a lot of people right now.”