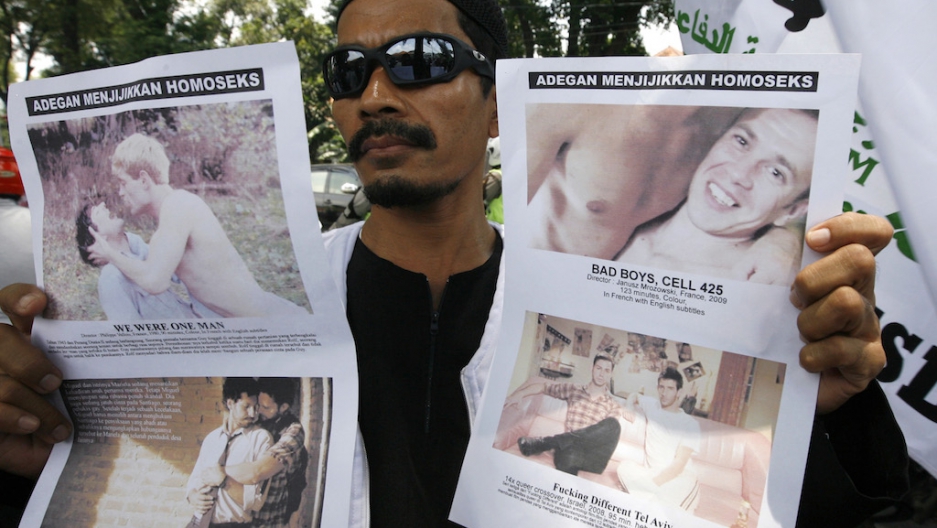 A recent rash of statements from various Indonesian politicians, from mayors to top ministers, reveals a mind-set about homosexuality that isn’t just bigoted. It’s downright bizarre.

Indonesia, the world’s most populous Muslim-majority nation, is a largely welcoming place. The balmy archipelago is home to a much gentler brand of Islam than, say, the extreme orthodoxy of Saudi Arabia. Unlike Saudi laws, Indonesia’s criminal code does not prohibit same-sex relations.

But the country remains very squeamish about LGBT life. According to a 2013 global survey, 93 percent of Indonesians think homosexuality should be rejected by society. Even Pakistan — at 87 percent — isn’t quite that severe.

This intolerance is increasingly legitimized by Indonesian officials. The following comments suggest that many of the country’s leaders don’t merely misunderstand homosexuality — they perceive it as a visceral threat.

Homosexuality is worse than nuclear war A banner put up by an Indonesian hardline Muslim group in Bandung, West Java, that says: "Lesbian and Gay banned in our area."

That’s the opinion of Indonesia’s defense minister, Ryamizard Ryacudu, who seems to believe the LGBT movement is a plot from overseas, deliberately subverting Indonesia’s sovereignty under the guise of “human rights.” He referred to the LGBT movement as a “kind of modern warfare … the cheapest warfare there is.”

Quoted by the Indonesian magazine Tempo, the minister said: “It’s dangerous as we can’t see who our foes are, but out of the blue, everyone is brainwashed — now the [LGBT] community is demanding more freedom, it really is a threat.”

“In a nuclear war, if a bomb is dropped over Jakarta, Semarang [a city 250 miles to the east] will not be affected — but in a proxy war, everything we know could disappear in an instant.”

It’s unclear where the minister believes these threats are coming from. Nations associated with LGBT-friendly policies — including nuclear powers such as the US, France and the UK — actually enjoy relatively warm ties with Indonesia. The noodle aisle at a supermarket in Jakarta.

This was an aside from the mayor of Tangerang, a city of 2 million where many Western corporations, including Nike, locate their factories.

Mayor Arief R. Wismansyah recently delivered a speech on child nutrition in which he emphasized the importance of breastfeeding. According to the Indonesian site Okezone, he also deviated into a lecture against busy parents who neglect their kids by feeding them instant noodles and milk formula — thus neglecting their natural development.

The result of these parental shortcomings: “It’s no wonder there are so many LGBT these days.” The mayor also reportedly said that Allah created “Adam and Eve, not Adam and Asep.” (In Indonesia, Asep, like “Steve” in the US, is a common man’s name.) Members of the Bissu, a transvestite community from South Sulawesi, prepare to give a performance in Jakarta.

That’s a decree from the Indonesian Broadcasting Commission, which frets that male TV stars acting girlishly will normalize transgender behavior.

According to the Jakarta Globe, the recently reiterated rules are as follows: Male actors can’t dress as women or wear feminine makeup, walk or talk in a feminine way, or use expressions that are “commonly associated with women.”

The commission has vowed to scrutinize programming closely and punish any violators.

Gays have “psychiatric problems” and transgender people have “mental disorders” A transvestite poses with police officers at the Kuta Carnival in Bali.

This is a ruling from the Indonesian Psychiatrists’ Association. One of its members, Suzy Yusna Dewi, told The Jakarta Post that “we really do care about them” — meaning LGBT people, whom she likened to drug addicts.

“What we are worried about is, if left untreated, such sexual tendencies could become a commonly accepted condition in society,” she told the Post. “Without constant intervention,” she said, “a person can easily return to their previous sexual tendency once he or she experiences withdrawal.”

The psychiatrist also reiterated the belief that pesky Western mores are invading Indonesia, declaring: “We must respect Indonesian traditions, which culturally do not accept same-sex marriage, and we should not bow to the influence of foreign values.”

The American Psychological Association doesn’t consider transgender people to be mentally ill, but the World Health Organization classifies them as having a “gender identity disorder.” Neither one defines being gay as a psychiatric problem.

Gay emojis are a bad influence So says Indonesia’s Ministry of Communication and Informatics. It contends that emojis depicting homosexuality — like two male cartoon characters holding hands — are a threat to children and should be banished from Facebook and WhatsApp.

According to an official announcement, officials have already convinced the messaging service Line, hugely popular in Asia, to scrub “gay” emojis for Indonesian users.

It’s not OK to be gay on Indonesian university campuses Under a rainbow umbrella in Dili, East Timor.

Though unenforced, that’s the opinion of Indonesia’s Research, Technology and Higher Education Minister, Muhammed Nasir. He was outraged to learn that one of the nation’s oldest collegiate institutions, the University of Indonesia, hosts an organization offering counseling to gay students.

“The LGBT community should not be allowed to grow or be given room to conduct its activities,” he told Antara news agency. “Even more serious are those LGBT members who go into universities with scientific studies or hold discussion groups.”

Nasir later denied seeking to bar gay students from campuses or student groups. Instead, he told news site Rappler, “Our problem is when they are showing romance, kissing, and making love [in public] … We are not against LGBTs but the activity.”

And the worst one of all: Gay people should be lashed in front of jeering crowds An Acehnese woman is caned for selling food during the Ramadan fast. In Aceh, anyone caught having a same-sex relationship faces the same fate.

Homosexuality isn’t illegal in Indonesia, with one exception: Aceh, a poor and war-torn province under Sharia law.

In Aceh, boozing and extramarital canoodling is punishable by beatings, dealt out by a masked man in dark robes standing in a public square. This penalty is also applied to same-sex couples caught having intercourse. In recent years, Aceh’s officials have become ever more outspoken about eradicating the “social disease” of homosexuality.

As one Acehnese woman previously told GlobalPost: “It is hard for people like me in this community to say openly that we’re against [public floggings]. Because people will say we’re against what the holy book and God says … and that means, in their interpretation, they can kill us.”