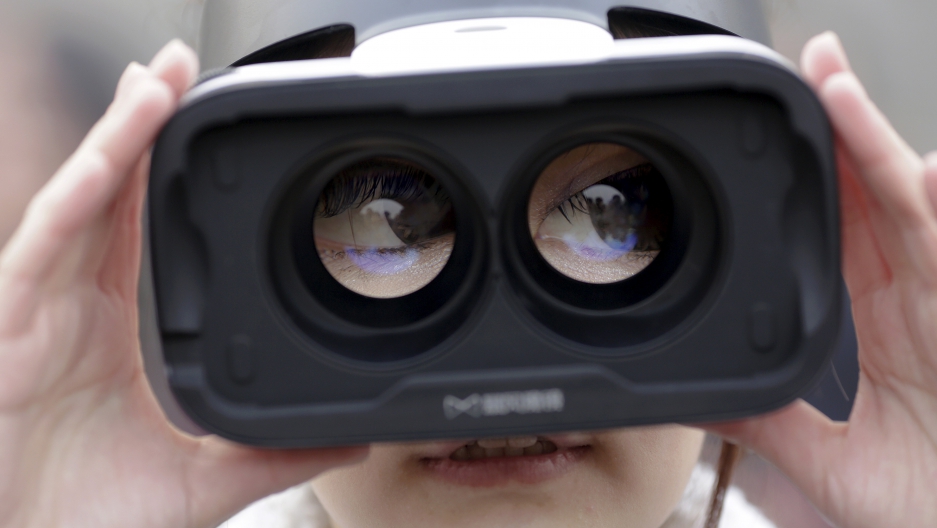 A girl wears a virtual reality headset outside the Great Hall of the People in Beijing after the opening session of the Chinese People's Political Consultative Conference (CPPCC) in Beijing, China, March 3, 2016.

"When Mark came to the lab, we give him lots of simulations where we put on the helmet and he walked around scenes and he visited other places," Bailenson says. "But most importantly he got to see what we call avatars, which are representations of other people inside the virtual world with you. And he got to experience the future of social interaction online."

Zuckerberg is not the only innovator interested in the possibilities of virtual reality. Apple, The New York Times and others are all investing in virtual reality and considering how it may change the way we interact socially and digitally.

"People love this technology," Bailenson says. "They love to interact with digital versions of others. What VR does is it takes all the gadgets away, it takes all of the multitasking away and you actually feel like you're with someone. We call this social presence — you see their emotions, you see their gestures and it feels just like you're in the room with them. It takes what is typically seen as something that's unemotional and distant and makes it feel like somebody is right there with you."

Virtual reality technology has made gigantic strides in recent years. In just the last two years the Virtual Human Interaction Lab at Stanford University in Stanford, California, has gone from using a $40,000 headset to using one that costs only $300.

"I was walking around and my body was moving. ... I was doing hand gestures, I was literally walking around a space. And I got to walk up to someone and literally shake their hand," Bailenson says. "A light bulb went off. ... I've been building these for years and we've always theorized about how it can be ready for face to face and I just had a really neat moment."

Bailenson, a cognitive psychologist, says he hopes virtual reality will transform the way people interact socially and do business.

"You can actually make VR better than face-to-face," Bailenson says. "You can make it hyper-personal or more social than you can have in the real world and there's a lot of ways to think about that ... with avatars you're always the way you want to look. You never have gestures that are inappropriate because you can have algorithmic filters that solve that. You can actually be doing very strange things, for example looking someone in the eye but looking two people in the eye at once and each of them feel like ... they're the only ones getting your eye contact."

With virtual reality developing at the rate its is, Bailenson hopes people will soon be able to use it to tele-commute to work meetings they'd rather not attend in person.

"The end goal," Bailenson says, "is to replace travel that you don't want to do. We should all travel when we want to, but let's get rid of commutes that are unnecessary and let's get rid of business meetings where you fly across the world and burn fossil fuel for an hour-long meeting. And I really believe that the the software and the hardware are here. We've just now got to use it."

A previous version of this story misstated when Zuckerberg came to Bailenson's lab and where the meeting he attended was.