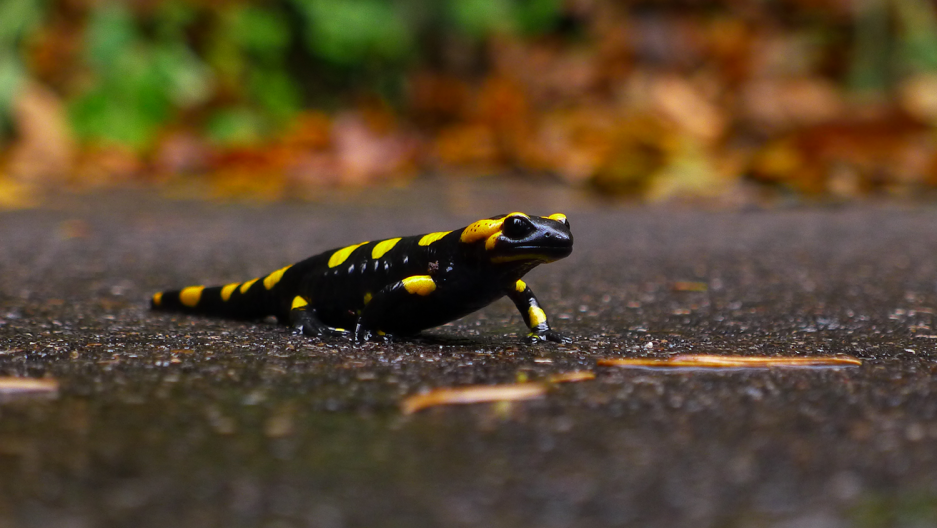 Fire salamanders in Europe have been devastated by the fungal disease, Bsal

From the chytrid fungus in frogs to white-nose syndrome in bats, fungal diseases are wreaking havoc on many animal species around the world.

“People looking at lists of new and emerging diseases have noticed that fungi are playing a bigger and bigger role,” says Elizabeth Kolbert, who recently wrote about the rise of fungal diseases and wildlife for Yale’s online magazine, e360.

Kolbert says scientists are asking whether this is due to fungi’s unique properties — they are extremely adaptable and can easily cross oceans; they can be dormant for a long time and then spring back to life under the right circumstances — or whether fungi’s sudden role in disease is a symptom rather than a cause.

Kolbert points to white nose syndrome, an ailment afflicting bats, as a good example of an adaptable, easily transferrable fungus. The fungus has its origins in Europe. It first appeared in the US in upstate New York and then spread to other areas, as one would expect with a new kind of infection, Kolbert says. This suggests a recent introduction into a new environment.

A fungal disease now hitting North American rattlesnakes followed a different pattern. “It seems to have popped up in different places, more or less at the same time, and in places that are not even contiguous,” Kolbert explains. “Scientists who have looked at it seem convinced that this is not just a recent introduction.”

If the fungus has been around for a long time, it would be odd for it suddenly to become more virulent in disparate parts of the world simultaneously, Kolbert says. So then the question is, are snakes being laid low by other factors and has this pathogen now become more deadly because snakes’ immune systems can no longer fight it off?

Kolbert says, many things could be compromising the immune systems of snakes and other creatures in the wild who are trying to survive in a rapidly changing world. Changes in moisture and temperature related to climate change; pollution; habitat destruction — the list goes on and on, Kolbert says. The rapidly increasing movement of goods from one part of the world to another also contributes to the problem.

“[These] diseases are hitting many, many species simultaneously, and in several cases that we know of, they were caused by moving stuff around the world,” Kolbert says. “As we move more and more cargo, as we travel more, as the world becomes more interconnected, we are effectively bringing together these evolutionary lineages that have been separated for tens of millions of years. And we are getting a lot of nasty surprises.”

And there's no reason to think that it's going to end, Kolbert says.

“These interactions are just increasing and ... even if only a very small fraction of them turn out to be dangerous, you're moving thousands and thousands of species around the world every day. You just need a very tiny percentage of them to be deadly to create a really, really big problem,” Kolbert says.

In Europe, a newly-emerging fungal disease known as Bsal has become one of these problems. But its deadliness has prompted unusually quick action by environmental authorities.

“People started noticing in Belgium and the Netherlands that a population of salamanders, known as the fire salamander, was crashing. Some of them were even eliminated,” Kolbert explains.

Scientists traced the population decline to an imported disease that they believe entered Europe via amphibians that were part of the exotic animal trade from Asia. Experiments showed that this particular fungus could be fatal to many different species of salamanders. 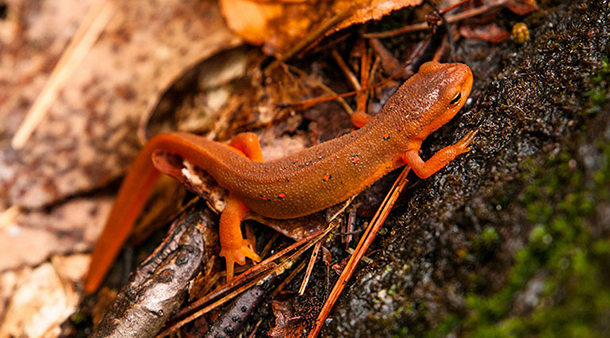 North American salamanders, like this red-spotted newt, could be devastated by the Bsal fungus if it isn't contained to Europe

US Fish and Wildlife Service

Kolbert, whose book The Sixth Extinction won the 2015 Pulitzer Prize for non-fiction, says this is a hopeful sign. “[P]eople are waking up to this problem. … Fish and Wildlife did respond to that [petition]. So I think people would point to that as an example that we've been warned and we are taking that warning seriously.”