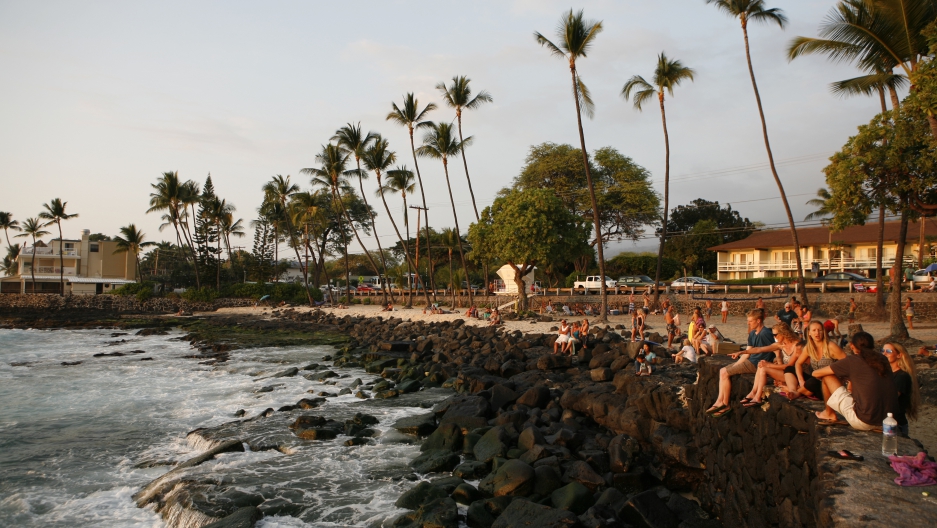 Tourists and locals watch the sunset from White Sands Beach Park in Kailua-Kona, Hawaii, January 31, 2016. The mayor of Hawaii's Big Island declared a state of emergency this winter to deal with a growing outbreak of dengue fever, spread by infected mosquitoes.

As of the end of February 2016 there were a total of 260 cases of dengue fever — in Hawaii. But despite headlines about the disease in places like Brazil, the Hawaii outbreak doesn’t seem to be making headlines on the mainland.

“A lot of folks here in Hawaii are a little disappointed that others don't know about the dengue outbreak that is going on right now,” says Molly Solomon, general assignment reporter for Hawaii Public Radio in Honolulu, Hawaii.

Solomon says 90 percent of those infected with the mosquito-borne virus are residents of the Big Island. Another 25 or so were visitors to the island.

“The outbreak that we're currently dealing with came from someone that was infected in another country,” Solomon says. “They came back to the islands, they probably didn't know that they had dengue fever. And then a local mosquito bit them, and that mosquito then became infected with dengue fever and went on to bite other people and [started] sort of passing on the disease from there. And this actually happened in September of last year and sort of snowballed throughout the later end of the year and it’s still going on right now.”

There is hope the outbreak is slowing down, but when Congress was recently briefed on the situation, most lawmakers had no idea the outbreak was happening.

“They didn't know anything about it,” says Laurie Garrett, a senior fellow for global health at the Council on Foreign Relations in New York. “They didn't know that there was a dengue outbreak in Hawaii and I was saying to them, ‘Pay attention because the reason Hawaii has had three rounds of dengue is because of the introduction of Asian mosquitoes to the Hawaian islands.'”

Garrett says public health officials need to think about more than medicines and health training. A big focus of public health is infrastructure. And when it comes to stopping infectious diseases, it’s important to think about preventing mosquitoes from spreading and breeding.

“These are the folks that actually have the skillset to know how to not poison you, not put D.D.T. on your front lawn, but stop those mosquitoes,” Garrett says.

In Hawaii, the ranks of people with skills to rid the islands of mosquitoes has been decimated.

"Back in 2009," Solomon says, "they had cuts to their state's Vector Control Program and it actually got gutted practically in half. So there are only 25 people versus 56, which is what they used to have. I think that's had a pretty big effect in that the folks that are working to spray these areas, notify the public, they've been stretched pretty thin.”

Garrett says it’s important for politicians and others who make decisions about where to spend money on public health to focus on preventative measures.

“[There are] wild stories about how hard it's been to get politicians to focus on this,” Garrett says. “But here's these dangerous mosquitoes. All you need, as happened in Hawaii, is one person showing up at the right time, the right temperature, the right weather conditions, getting bit. That mosquito goes and bites 10 other people and boom, you start to have an outbreak. And so, you know, I was saying to the congressional staffers, we will have local transmission of Zika. It will happen."