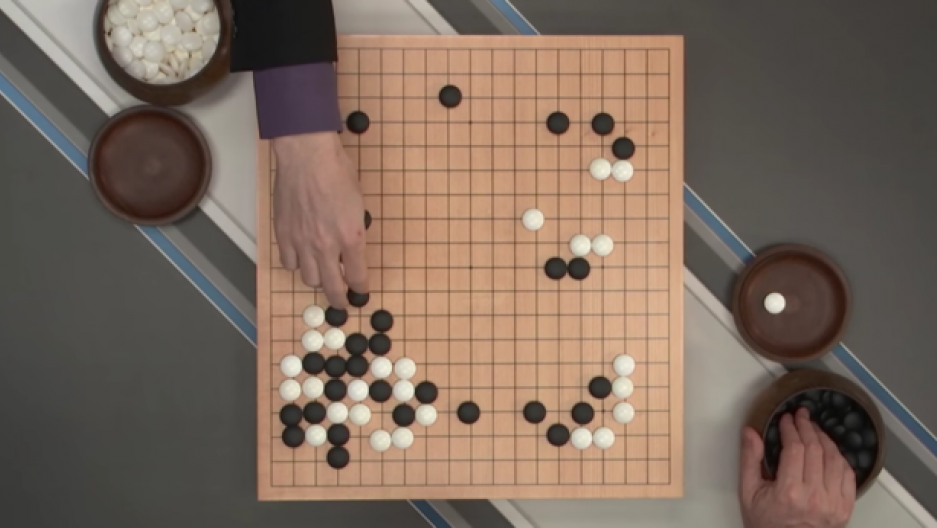 AlphaGo on the move in the Google DeepMind challenge, Seoul, South Korea.

Can a human empowered by the ancient wisdom of China fend off the sharp-as-a-tack logic of computer programming? That's what's at stake in the five-game Go tournament being called Google’s DeepMind Challenge now going on in Seoul, South Korea.

It hasn't gone so well for the human. The computer named AlphaGo has a 3-1 lead over the South Korean Go grandmaster Lee Se-dol. This means the grandmaster who represents Go’s last hope for beating a computer has already lost the five-game series and is hanging on for dear life.

“Go is an ancient, old-as-chess, Chinese game played out on a board with 19 by 19 squares, and you just put down little stones, white or black stones, and you try to capture your opponent's stones by surrounding them," says BuzzFeed science writer Tom Chivers. “It’s a very beautiful game.”

But in the case of Go, looks can be deceiving. The rules may be very simple to understand but because there are many ways that you can play each move. It's incredibly complex, Chivers says.

So the stage was set for this artificial intelligence vs. human match up, and a headline that appeared then summed up the early results: "In a Huge Breakthrough, Google’s AI Beats a Top Player at the Game of Go."

“AlphaGo wiped the floor with him" during the first three games, says Chivers.

But during the fourth game, grandmaster Se-dol fought back and won.

In fact, says Chivers, "This fourth game may be the last game that a human wins against the best Go computer in the world.”

Game No. five will be played March 15 in Seoul, South Korea. You can watch AlphaGo take on Lee Se-dol in the final match of the Google DeepMind challenge.