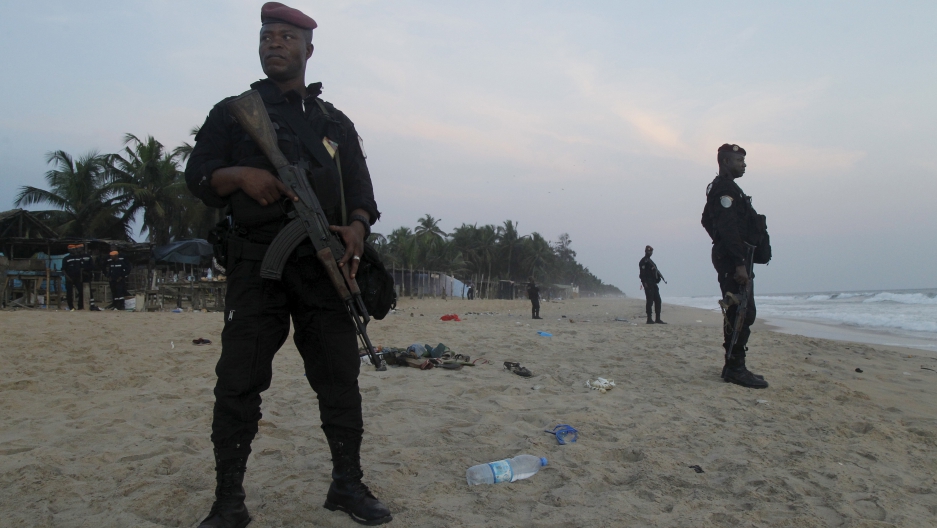 Ivory Coast is the latest country in West Africa to suffer an attack by Islamic militants.

Gunmen stormed a beach resort in Grand Bassam and opened fire. The government says 18 people died, as did all six attackers.

“It was the first sunny Sunday in weeks,” says Dionne Searcey, West Africa bureau chief for the New York Times. “It was a beautiful day. People were having Sunday brunch by the pool, or swimming in the sea. And it just turned into mass carnage.”

The militant group al-Qaeda in the Islamic Maghreb, AQIM, has claimed responsibility for the attack.

Ivory Coast is no stranger to violence — it has endured two civil wars since 2002. But this is the first attack by Islamic militants in the West African nation. It’s also the third attack on a western-related target in West Africa in the last four months that has been claimed by AQIM.

A hotel in the Malian capital, Bamako, was attacked on November 20, and hotels and a café were attacked in Ouagadougou, the capital of Burkina Faso, on January 15.

Grand Bassam is a UNESCO World Heritage Site, because of its stately colonial-era architecture. It’s popular with expats, tourists and Ivorians of all classes. "If you’re in Abidjan, it’s going to be your beach getaway,” says Searcey. “It’s only about an hour’s drive from the city. It’s just a really relaxing, beautiful, palm-tree lined coastline.”

Authorities across West Africa are “pretty worried” says Searcey, about AQIM’S threat to attack anywhere. “It looks like everyone is taking security very seriously. The next place people think could be hit is Senegal. I live in Dakar, right now, the capital of Senegal, and there are checkpoints all over the place. I was just at a little tiny coffeehouse where there was a metal detector, one of those little wands that they wave over you. And that’s new. You can’t go into a hotel without popping your trunk and opening your glove box.”

“Elsewhere, throughout the region,” adds Searcey, “everyone is really, really worried ... for locals and expats alike.”