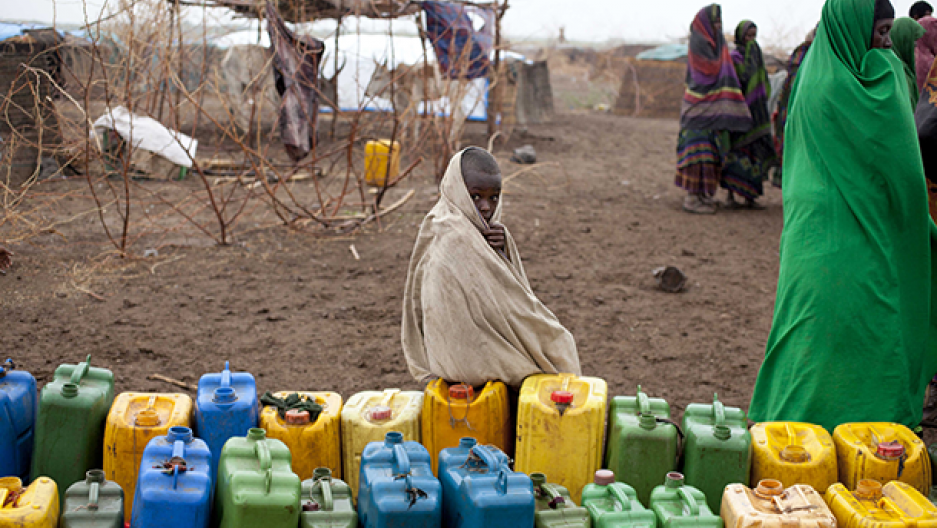 An Ethiopian child waits to collect water from an Oxfam tank.

Drought associated with El Niño is hammering subsistence farmers in Asia, Latin America and much of Africa — creating a hunger emergency for 60 million people, according to figures from Oxfam America.

“What we are observing is really a concerning situation,” says Nahuel Arenas, director of the humanitarian response department at Oxfam America. “It is ... drought exacerbated by the El Niño phenomenon, which really creates a huge humanitarian crisis.

El Niño is a natural occurrence that happens every seven or eight years. Temperatures in the tropical Pacific Ocean become warmer than normal, which releases heat into the atmosphere and changes rain patterns, wind patterns and ocean currents.

El Niños tend to intensify weather events like droughts or floods. In Ethiopia, for example, Oxfam was already observing one of the worst droughts in the last 50 years. This year’s El Niño has made it even worse, Arenas says.

Eighty percent of Ethiopia’s population depends on agriculture, most of it subsistence farming, which leaves them vulnerable to droughts, Arenas explains.

According to the Ethiopian government, more than 10 million people are in need of humanitarian aid. This is in addition to the almost eight million people who are already being supported by the government's existing emergency system.

“If we are not able to act now, these numbers will increase over the next months,” Arenas warns. “This is a trend we are observing in other places in eastern and the Horn of Africa, as well in southern Africa. According to UN agencies, over 60 million people across the world will be affected by El Niño.”

A generation ago, the world was shocked into action by terrible pictures of starving children in the Horn of Africa. It may happen again: Malnutrition is already a reality in Ethiopia, Arenas says.

“The Ethiopian government has been very strong in leading the response They have spent around $200 million to respond to this emergency,” Arenas says. “But the estimation is that to properly respond, we need $1.4 billion in Ethiopia.”

The best Oxfam can do right now is ensure that the poorest families have access to safe water and food, and help families keep their livestock alive, Arenas says.

A poor family in Ethiopia may typically survive with a couple hundred sheep or goats and some camels. Right now, many of these families may have only 10 goats or sheep and one camel. “So, it's really hard for these poor families to recover. These are the kind of families that we are trying to help,” Arenas explains.

Ethiopia is a trouble spot, but other places in the world are struggling, too. In Malawi, Zimbabwe and South Africa, harvests have been hard hit. Food prices have increased by 50 to 100 percent, which makes it difficult for poor families to access food.

Central America needs help, also, Arenas says — Guatemala, El Salvador, Honduras and Nicaragua, in particular. “This drought in Central America, where we have been working to help families access food and water for the last 12 months, has been bad, but the next months are really the ones that will make people suffer the most,” Arenas says.

Arenas hopes the US and the international community will do more to support governments and aid agencies dealing with this crisis, but acknowledges that the humanitarian system is overstretched. Right now, he says, the world has reached a historic record in the number of displaced people: more than 60 million.

To find out how you can help, visit Oxfam America's website.