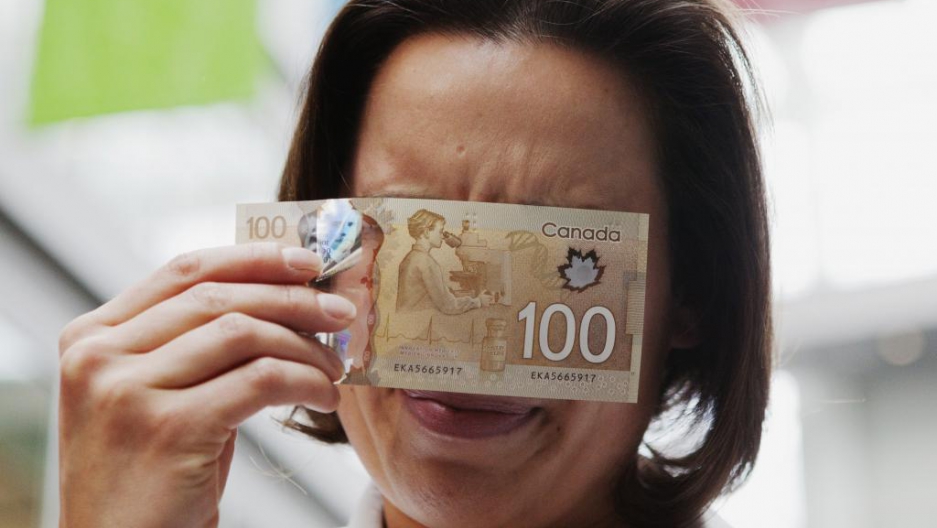 Martine Warren, a scientific advisor to the Bank of Canada, demonstrates how to view a security feature on the new polymer Canadian 100 dollar bill to reveal hidden numbers when pointed at a single point light source in Toronto November 14, 2011.

Justin Trudeau, the snowboarding feminist prime minister elected in October, has announced that Canada will issue a new bank note featuring an iconic Canadian woman. And it's going to roll out two years before America's design for a woman on the US $10 bill.

The balding Sir Wilfred Laurier appears on the blue $5 bill, while Sir John A. McDonald and his comb-over grace the purple $10. William Lyon Mackenzie King is on the red $50 and Sir Robert Borden on the brown $100 note. (Yes, Canadian money looks like Monopoly money).

A portrait of Queen Elizabeth II appears on every coin and bank note, as well as on the green $20 bill, which is designed as a tribute to Canada’s military history.

Wildlife is another big theme. There’s the loonie — the Canadian one-dollar coin named after the common loon, a migratory bird found on northern lakes. And there’s the toonie — the two-dollar coin, a portmanteau of "loonie" and "two," featuring a polar bear.

But no Canadian bank note features a Canadian woman as the main image. While the flip side of the $100 bill shows a woman scientist peering down a microscope, she isn't identified.

At last, it is time.

The Bank of Canada has put out a call for Canadians to nominate women to appear on a new bank note. Candidates must be Canadian (natch), by birth or naturalization, and deceased for at least 25 years. No fictional characters allowed.

Nominations are open until April 15, and the new bill is due to be issued in late 2018.

Big decisions ahead. Here are a few women that would make our shortlist:

An author who published as the ambiguous "L.M. Montgomery," she was best known for a series of novels, beginning in 1908, featuring the misadventures of a red-headed orphan girl named Anne of Green Gables.

During her life Montgomery (1874-1942) published 20 novels as well as 530 short stories, 500 poems and 30 essays (phew!), most of them set in Prince Edward Island, Canada — now a big draw for Japanese tourists who for some reason are obsessed with Montgomery's orphan Anne.

Isn't it nice to think that tomorrow is a new day w/ no mistakes in it yet? - LM Montgomery, Anne of Green Gables pic.twitter.com/70huO2lwa6

Many Canadians know Laura Secord (1775-1868) from a chain of chocolate shops named in her honor.

But the real Secord was a Canadian heroine of the War of 1812. She famously walked 20 miles out of American-occupied territory to warn the British of an impending American attack, in kind of a reverse Paul Revere situation.

Secord's fame grew in 1913 when Laura Secord Chocolates was founded in Toronto. The sweets still come in boxes decorated with her cameo.

A self-taught artist, Pitseolak (ca. 1904–1983) grew up in the eastern Arctic with a traditional Inuit lifestyle captured in thousands of distinctively autobiographical drawings.

“Pitseolak” means “sea pigeon” in Inuktitut, an Inuit language, and she is quoted as saying: "When I see pitseolaks over the sea, I say, 'There go those lovely birds — that's me, flying!'"

ᐱᑦᓯᐅᓛᖅ ᐊᓲᓇ (Pitseolak Ashoona) told us so many stories in her art, like this one: 'lovers stranded on todal island' pic.twitter.com/TLymKgilne

Putting Pitseolak Ashoona on currency would be pretty rad https://t.co/w7XwKLgeSd

She was Canada’s Rosa Parks, but nine years earlier.

Desmond (1914-1965), a black businesswoman from Nova Scotia, challenged racial segregation in 1946 by refusing to leave a whites-only section of a theater. Her case inspired the civil rights movement in Canada.

Before there was Rosa Parks there was Viola Desmond https://t.co/AGVR6qqHph

One of Canada's best known artists and writers, Carr (1871-1945) was strongly influenced by the indigenous people and landscape of Canada’s Pacific Northwest in the early 20th century. Her work was bold, bright and modernist, with a documentary approach.

I would like this photo of Emily Carr and her dog to be on the #BankNOTEable bank note. pic.twitter.com/EDYRqO9amr

Much of what is known about the Beothuk today came via Shanawdithit, who provided information about their language and drew pictures that illustrate the tragic demise of her people and way of life.

Remind Canadians with the history that made this nation possible. Shanawdithit (Nancy April) was the last known Beothuk alive #IWD2016

On June 6 1829, Shanawdithit died in a St John's hospital. She was the last of the Beothuk people. pic.twitter.com/z70IHm4ClJ

McClung (1873-1951) was a political activist and leader in the woman's suffrage movement. Her efforts helped make Manitoba the first Canadian province where women had the right to vote.

She was also one of the “Famous 5,” a group of women who in 1927 petitioned the Supreme Court of Canada to have women declared “persons” and therefore eligible for public office as senators. The court decided against the women, but the British Privy Council — at the time Canada's highest appeal court — overturned the decision, officially declaring that the term "person" included women.

Let's see Nellie McClung be the next woman on a Canadian bill. #InternationalWomensDay pic.twitter.com/RuiflC6TGL