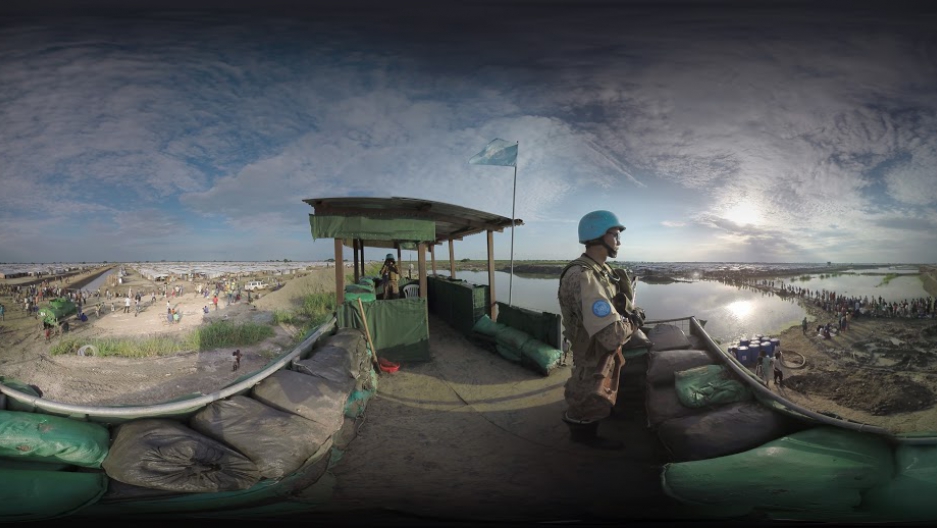 The images of famine in Africa are familiar by now: emaciated bodies, parched landscapes, sprawling UN refugee camps where people line up for desperately needed rations of food and water.

But a team of journalists and filmmakers have taken the visuals of this crisis even further.

They've produced a virtual reality documentary about South Sudan's brutal civil war, and the widespread famine that shadows it.

“We wanted to take people to South Sudan so that they could hear directly from the people who are experiencing this crisis,” says journalist Marcelle Hopkins, who is part of the team behind the VR documentary "On the Brink of Famine," created by FRONTLINE and the Brown Institute for Media Innovation.

“The film opens in a village in Jonglei state, which is one of the rebel-held areas of the country, and the Red Cross is delivering food there. The village is on an island in a huge swamp and so it's very difficult for planes to land there. So what they're doing is flying over and dropping food from the air. The first scene opens with that food drop. Viewers actually get to be in the middle of the drop zone as the bags of sorghum and beans and salt and sugar are falling on top of them into the swampy area.”

Virtual reality technology pops up a lot these days. The Navy uses it to simulate parachute jumps for training. Video gamers use it to immerse themselves in futuristic fantasy worlds. Now filmmakers, not to mention social scientists, want to know if technology that can immerse viewers in one of the world’s most pressing humanitarian crises can stimulate engagement and empathy.

But whether this immersive technology will do that remains an open question, says Hopkins. “That's an interesting question and it's one that a lot of people are studying right now. Some people believe that virtual reality is the ‘empathy machine’ and that it can heighten empathy for people who are experiencing it.  I have not seen data that proves that, but it certainly seems plausible.”

In the meantime, there’s no need for Virtual Reality goggles or Play Stations. You can get a feel for how immersive this film is on Facebook:

“On the Brink of Famine” takes you inside South Sudan in 360° to meet people battling a man-made hunger crisis. Experience the front lines of a famine in the making, in this VR documentary by FRONTLINE and The Brown Institute for Media Innovation.

“We do want people to experience it in 360 degrees, we want people to make decisions about what they are looking at, what they find interesting. And we hope that anywhere someone is looking in the spherical video, that they will find something that will enhance the story.”

Famine is such a complex issue to capture and to personalize. One important part of the film, says Hopkins, is that it helps to dispel the idea that famine is a natural disaster.

“I grew up in the 1980s and I learned about famine as a child through the famine in Ethiopia," Hopkins says. "I was taught that famine is caused by a drought and that it doesn't rain enough in Africa and that this is a very sad situation, and that it is unavoidable because it's Mother Nature. What we learned in reporting on this crisis is that it's not a natural disaster, that it is entirely man-made."

"This crisis is caused by people who have made decision that have created the conditions that we’re seeing today, which is a Civil War that has displaced millions of people. Taking them away from their homes — from their farms, from their cattle — has taken away their ability to feed themselves. And severe underdevelopment has also contributed to the difficulty in getting emergency food aid to these people who are going hungry.”

“The canoe was not big enough to carry them all. Peter Met Biel Luak, his wife, her mother and his 10 children needed to travel through the swamp to escape. Some had to swim or walk through chest-deep water. They had no food, no blankets, no mosquito nets.

“I left nothing behind,” said Peter Luak. “My house was burned down and my cows and belongings were all looted.”

Luak and his family were forced to flee their home in August 2015, when fighting between government and rebel forces decimated their town of Leer.

After three days of wading through a web of narrow canals that traverse the Sudd, one of the largest swamps in the world, they found Ghouyman, a small island where a few other families had taken shelter.

Upon arrival, Luak began weaving a fishing net with string donated from another family on the island. On a good day, he catches three or four fish — still not enough to feed the whole family. Some days, he doesn’t catch anything. If there is a little food left over from the day before, they give it to the children, and the adults don’t eat.

Luak and his family are among the more than 2.8 million people in South Sudan — nearly a quarter of the country’s population — who are currently facing food shortages and need urgent assistance according to the United Nations. The UN is now warning of a looming famine.”