A railroad track in Moscow, Arkansas.

When Jack Spaulding was growing up in Moscow, Tennessee, he always wondered how the town, a small, rural community of about 80 residents, got its name. It didn’t seem to have any obvious connection with Russia, but could any of the local tales he’d heard actually be true?

“I would ask all the old folks here in town if anybody knew how the town got its name. Well, I got all these hokey answers like, ‘Well, it's because of the moss and... they used to send the cows down there to graze on the moss. Moss cow. And then after that Ma's cow — like, belonging to your mother's. ... Nobody really had any idea where the name came about,” Spaulding says. 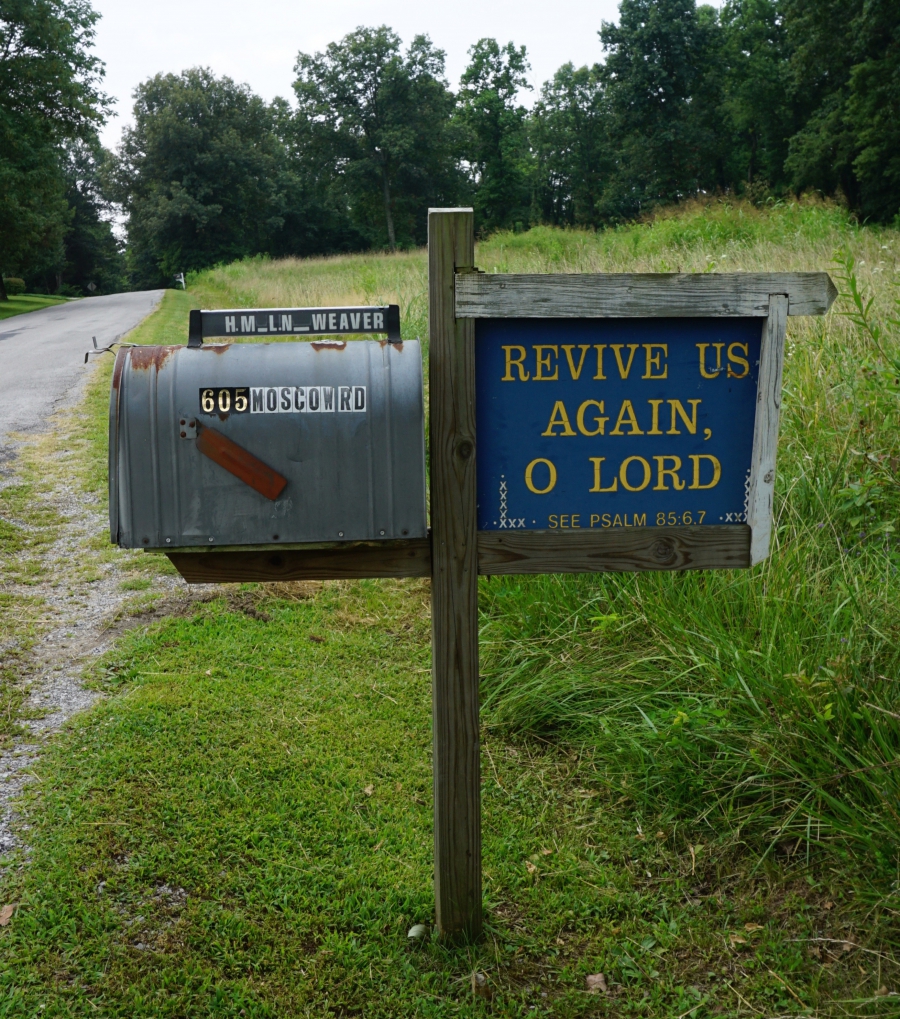 A mailbox in Moscow, Kentucky.

Spaulding eventually dug deeper, and his research turned up an unexpected finding: The area had been known as something like “Moscow” since before the town was founded in the early 1800s. That clue led him in a new direction.

“I went through the dictionary looking for any type of word that would sound similar to Moscow or would be spoken by Europeans like 'Moscow' and I believe as I recall, the word closest to that was Mashetow," he says.

According to Spaulding, Mashetow was a Native American word meaning "to go" or "the place to where we're going."

"I think Moscow was the place to where the Native Americans would go for the watering ground. ... What is this place? Mashetow! This is the place we're going.”

Spaulding’s conclusion wasn’t definitive, but it was a worthy effort. He isn’t the only person to set out trying to figure out why a small town in the middle of America acquired the same name as the capital of Russia. There are more than 20 identically named cities scattered across the country. There’s a Moscow in Idaho near the border with Washington, another up north in Maine and one down south in Texas.

When Ren Vasilyev, now a professor of geography at the State University of New York Geneseo, was a graduate student, she decided to tackle the riddle of America’s many Moscows. It was 1986, the height of the Cold War battle with the Moscow-capitaled Soviet Union, and in those misty pre-Internet days, a project like this required a lot of analog legwork.

She poured through old county history books, and found that just as with Spaulding's hometown, most of the Moscows in America didn’t have anything to do with Russia or its capital.

One was the result of a misunderstanding: Moscow, Kansas. Town officials had tried to name their city after Luis de Moscoso, a Spanish conquistador, but they decided to shorten the name to M-O-S-C-O. When they submitted an application to create a post office, it came back with the extra letter.

“The guy in DC thought that these little silly people in Kansas didn't know what they were doing and had spelled the name wrong. So he had added that W on it,” Vasilyev says.

But, the most common reason people named their community Moscow, she learned, was more straightforward.

“Things like Spring Valley or Springfield or Blossom Hill, or you know, those kind of pretty generic names were already taken. And so people started using what were considered exotic names, hoping that no one had already used them,” she says.

The fire department in Moscow, Michigan.

The mystery of the Moscows of America also intrigued Erjan Aisabay, who set out to visit all of them and write a book about his experience. Aisabay, who was born in Kazakhstan but attended college in the original Moscow, launched his project hoping that America’s shared love of Russia’s capital city might help bring the two countries together.

But as Aisabay drove from state to state, his dream of finding a Russian connection dwindled. And some of America’s Muscovites turned out to be less than supportive. Like in Moscow, Texas, where his attempt to strike up a conversation didn’t turn out as planned.

“I say, 'Hi my name is so and so, you know I'm writing a book about Moscows' and then you know she looks at me like completely mistrust and she's like 'You should leave.' ... And I saw something that looked like a gun. ... This was my last Moscow and I'm like, 'I don't want to die in my last Moscow!'”

Aisabay was disappointed by what he found during his tour — he had hoped to see more people studying Russian, or other signs of a greater interest and connection to the original Moscow. Vasilyev, the professor, takes a more optimistic view.

“I was actually pleased that the Americans who were settling here from other places, from other European places, were taking Moscow as a name thinking of it as a prestigious name. People don't want to live in a place that isn't prestigious. ... People want it to be something other than, you know, Hog's Hollow," she says. That's what Moscow, Idaho, the biggest Moscow in the US, was originally named.

00:30 What do Toad Suck, Eighty Four, Cut and Shoot, Glen Campbell and Cookietown have in common?

1:30 Introducing the Nametag series.  We are digging up the stories behind place names in a series we’re calling Nametag

5:18 Reporter Alina Simone has always been curious about the origins of all the Moscows in the United States. There are 26 Moscows

6:39 Ren Vasilyev decided to tackle the riddle of America’s many Moscows as a graduate student in 1986

7:01 Most Moscows didn’t have much to do with Moscow. In fact, they weren’t even pronounced Moscow

7:31 Jack Spaulding of Moscow, Indiana has also always about the name

9:43 The biggest reason to name your community Moscow, everything else was taken

10:03 Only one, lonely Moscow — Moscow, Pennsylvania — was allegedly named by actual Russia people

11:20 Not all American Muscovites were friendly. In fact some were downright hostile like one woman in Moscow, Texas

12:04 Erjan visited Moscow, PA to look for any evidence of the supposed Slavic connection

13:27 Professor Vasilyev’s research shows that only one Moscow, the town of Lester in New York, cast the name aside for political reasons

15:14 There are many more Russian names in the United States like Saint Petersburg, FL, Sebastopol, CA, Odessa, TX

15:49 The issue of place names was very sensitive in Russia especially under the Soviet Union

18:14 Nina subjects Patrick to “Arab, Alabama” an offensive song (and video) by the country comedy duo Pinkard and Bowden

20:06  Submit YOUR Nametag story idea. Have you always had a question about a place name? Be it a street name or the name of a town or a mountain?  Let us know.  Email language@pri.org or tweet at us @lingopod

20:45 Finally, finally the answer to the NEH accent quiz from last week

You can follow The World in Words stories on Facebook or subscribe to the podcast on iTunes. A previous version of this story incorrectly stated there is a Moscow in Washington.