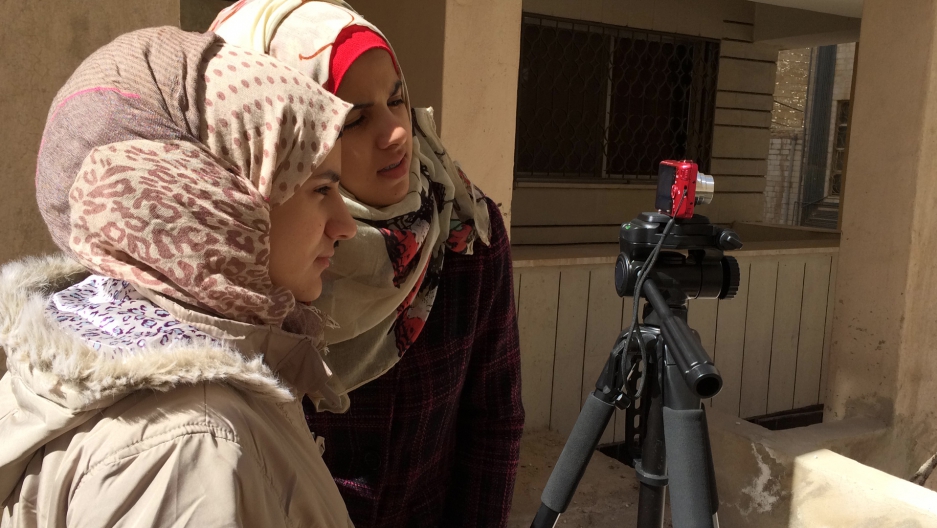 "I want every girl who went through something as I have ... just not to be quiet about it and not to keep things inside of her," says a 16 year old Syrian filmmaker who uses the name Walaa al Alawi.

It’s hard to believe that the Syrian director of "The Girl Whose Shadow Reflects the Moon” is just 16 years old.

Her five-minute autobiographical video is wise and lyrical. It’s also infused with the sadness of a childhood shattered by war, and the efforts of an adolescent struggling to find a new home in a foreign land.

The film has been well received at several international festivals. It’s the first production by a refugee who calls herself Walaa al-Alawi, a pseudonym the teen uses to maintain a low profile.

Walaa learned the basics of video production in a six-week workshop with American filmmaker Laura Doggett in Irbid, Jordan. Doggett set out to teach young Syrian refugees there how to tell their own stories on video, after hearing them complain that media coverage by Western reporters didn't capture their reality.

“The girls themselves felt that the reporting was a bit black and white. Walaa was already a storyteller so she was writing stories on her own,” Doggett says. “She’d even gone as far as to try and figure out how she could take a filmmaking class online, but, you know, she doesn't have Internet.”

Walaa takes the viewer through events from her past that no one, much less a seventh grader, should have to witness — like the day two of her friends got shot as the three of them walked home from school in her hometown of Dara'a.

As usual, Walaa says, she was in the middle because she was the tallest.

“I could hear something. 'Psst.' …  My friend fell to the ground. The gunshot went through her head. My other friend, a gunshot went through her back when she fell. I stood there from shock,” she recalls in the film. “All I could think of was, 'How can a shot go through like that?' My friend was saying, 'Walaa, I don't want to die. I'm still young.’ This moment in my entire life, I will never forget it.”

After living through raw experiences like that one, Walaa is busy creating a new life in Jordan — and exploring future film projects.

“A lot of the Syrian girls don't have these kinds of dreams," says Tasneem Toghoj, who co-facilitated the video workshop. "And a lot of them don't really see themselves as being able to follow these dreams because nobody trusts them, supports them, or nobody has faith in them like Laura did. ... Walaa is just breaking all the traditions, one after the other."

And she wants to empower her peers, too.

"I want every girl who went through something as I have," Walaa says, "just not to be quiet about it and not to keep things inside of her."