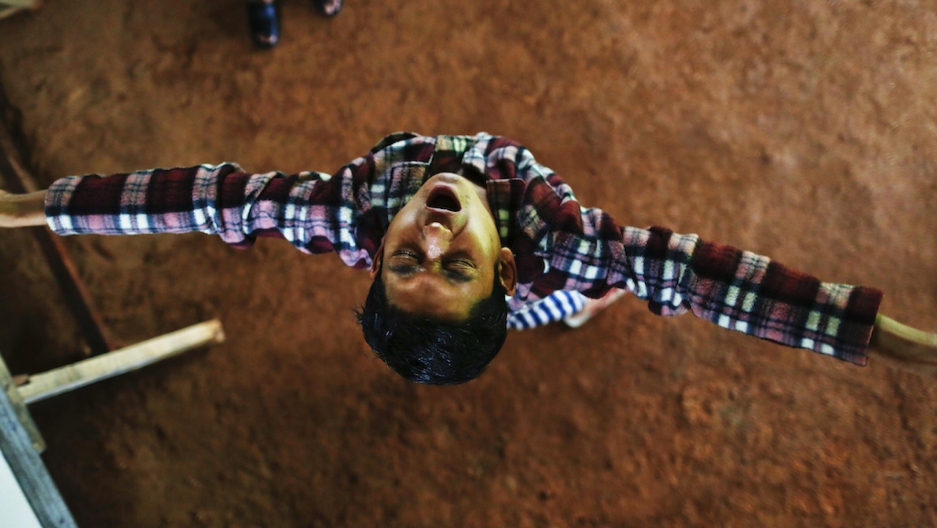 Tu Nan, a former heroin user, raises his hands during morning prayers at the Youth for Christ Centre near Naung Chein in Myanmar's Kachin state, July 9, 2013.

You won’t hear much about it in international media. But Myanmar, exalted by the West for veering toward democracy, is in the middle of its largest civilian uprising in nearly a decade.

Like practically all uprisings in Myanmar, where a domineering army still holds immense power, this revolt is turning bloody.

But similarities to past dissident movements end there. Because the protesters are Christian, there are no burgundy-robed Buddhist monks stoically facing down troops in the street.

Because it is controversial, the movement is not cheered on by Aung San Suu Kyi, the White House-backed heroine swept to power in a November election. And because it is playing out in hard-to-reach borderlands, it is shrugged off by much of the global press.

Its adherents are not crying out for democracy, per se. But their goal is no less essential: Reining in Myanmar’s drug trade, a billion-dollar industry that mires the nation in warfare and chaos.

This movement is called Pat Jasan. It’s a network in mountainous Kachin State, a territory near China that was Christianized by Americans in the 19th century.

Formed more than two years ago with the help of local Baptist and Roman Catholic church leaders, Pat Jasan unites not so much protesters as vigilantes. Clad in fatigues, they raid drug dens, seize bundles of meth and interrogate addicts at midnight.

The group is formidable. It claims a whopping 100,000 members. Though that figure is tough to verify, the movement has repeatedly proven that it can amass thousands on short notice.

Their crusade is illuminating a poorly kept secret: Many of the country’s biggest drug syndicates are, in fact, armed units controlled by the military. That makes Pat Jasan the largest civilian movement actively mobilizing against Myanmar’s all-powerful armed forces.

But unlike more palatable activists, who have long received US funds to push for a pro-Western democratic system, Pat Jasan is largely ignored. They will never receive aid from foreign governments. Their methods, which include flogging addicts until they repent before God, are just too extreme.

That doesn’t make their grievances illegitimate. Pat Jasan wants to end the reign of army-backed crime syndicates, which run parts of Myanmar like little dictatorships.

Where these militias exist, there is no democracy. Only the rule of bandit kings.

Blood in the poppy fields

Pat Jasan’s popularity is fueled by fear that society is disintegrating at Myanmar’s fringe. The unchecked flow of meth and heroin has reduced already-poor villages to dismal places, haunted by skeletal men who’ll sell their family’s last chicken for another high.

“They [the militias] are slowly torturing us to death with drugs,” says Tu Raw, a top-ranking Pat Jasan leader. “They’re getting rich from our pain.”

Now the movement is growing bolder.

In recent months, the vigilantes have graduated from smacking around addicts and forcing them into primitive rehab camps. They’ve started attacking the drug trade at its source: Poppy fields under the control of “Border Guard Forces” and “People’s Militia Forces,” armed units that answer to the national military.

This near-suicidal tactic involves deploying thousands of men and women with knives to hack up poppies before a coming harvest. Predictably, it has ended in violence.

After losing one teenage member to gunfire in January — he was buried in camouflage gear like a fallen soldier — Pat Jasan staged even more daring missions in late February.

Yet they were forced to retreat when guards retaliated with guns and grenades, an assault partially captured on members’ smartphones. The attack left 30 injured, more than 10 seriously. Pat Jasan has already vowed to return, possibly with weapons.

In the West, Myanmar’s drug trade is too often seen as another symptom of the nation’s long spell of tyranny — a nasty blight ranked alongside child soldiers and censorship.

In Washington, DC, it’s a distraction from the primary goal: Establishing a pro-US government, with limited Chinese dominance, that offers market access to American corporations.

But Myanmar’s massive drug trade is not a sideshow. It’s a pillar of the economy.

Hard drugs, specifically meth and heroin, are reportedly the country’s third-largest export behind jade and natural gas. According to a US congressional study, Myanmar’s illegal narcotics trade is worth an estimated $1 to $2 billion per year. The real figure is quite likely higher.

Narcotics are a primary funding source for militias that control significant swaths of the country. There are more than 35 such units, operating under the army’s chain of command, and they wield an estimated 10,000-plus fighters.

“All of these ‘people’s militia forces’ are involved in the drug trade at some level,” says John Whalen, who retired from the US Drug Enforcement Administration in 2014 after a 26-year career spent largely in Myanmar.

“It might be acquisition of methamphetamine precursors,” he says. “It could be producing or tableting meth ... but all of these militias are intimately involved.”

Each unit is situated along a key border drug route, which feeds the hunger for meth and heroin in China, Thailand and beyond. The militias’ primary job is to hold down turf for the government and feed intel to the army. In return, they're given impunity to self-fund by producing and transporting drugs.

But anyone unlucky enough to live in militia territory is subject to the reign of armed barons. They make their own rules. They rob and assault villagers with impunity. They make a mockery of Myanmar’s yearning for democracy.

They circulate their products locally at dirt-cheap prices: As little as $3 for a meth pill, $1 for a shot of heroin. Narcotics in some borderland areas are de facto legalized; as one local expression has it, “drugs are sold like vegetables.”

This is the disorder that birthed Pat Jasan. 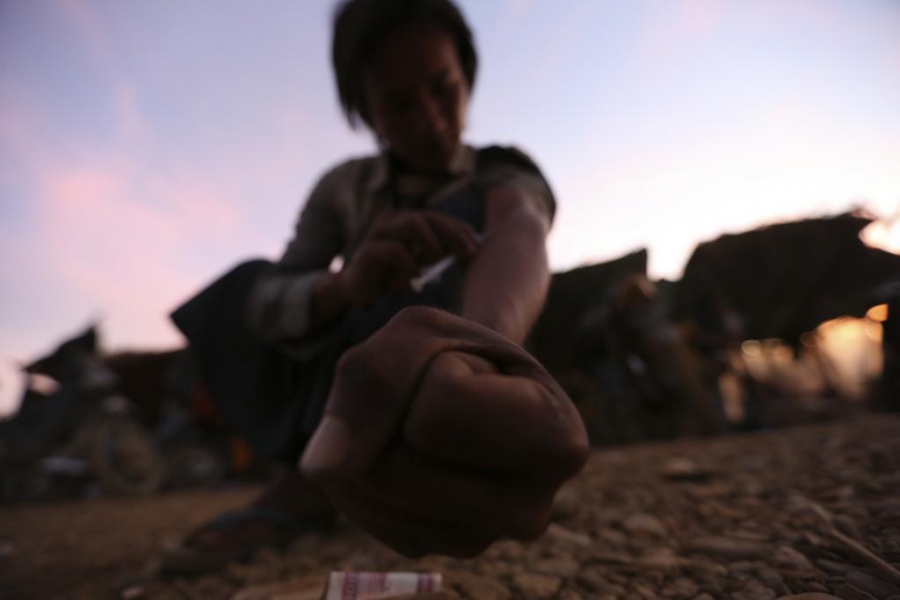 Since the election, Suu Kyi has devoted her time to negotiating with the military for the presidency. Becoming Myanmar’s president is her dream — one she shares with the White House along with the general population, which granted her an undeniable majority.

But this dream has dimmed. Suu Kyi is still barred from the presidency by an army-written clause. This will force her to run the country through a loyal proxy. Her pick: Htin Kyaw, 69, a UK-educated advisor and party loyalist who is expected to dutifully carry out Suu Kyi’s orders.

In other words, Suu Kyi has already tested the generals’ patience. She is unlikely to antagonize them further by sticking up for a band of ragtag vigilantes — especially those railing against their complicity in the drug trade.

That leaves 663 other legislators to take up the cause. Intense hope surrounds Myanmar’s newly refilled parliament, the fruit of a tortured struggle backed by the US. Awaiting the formation of a new cabinet in April, they are already overwhelmed by public demands to fix Myanmar’s crumbling hospitals, schools, roads and courts.

More photos of protests against drug-trafficking, army-backed militias in Myanmar. Ball is now in the army's court. pic.twitter.com/BnFTXjw8iS

But the odds of this body using its newfound power to shut down narco-militias appears low.

After all, in an absurd twist, Suu Kyi sits in parliament — albeit in different houses — with an unrepentant warlord, the same alleged drug trafficker whose poppy fields Pat Jasan seeks to destroy.

His name is Zakhung Ting Ying. And as the world giddily celebrated Myanmar’s vote, this militia commander secured re-election to the Upper House by threatening any rival who entered his turf near the Chinese border.

He made good on his threats, the NLD alleges, by ordering armed men to ambush their candidates’ campaign team and destroy equipment. News of the attack was drowned out in the jubilee over the party’s landslide victory.

Ting Ying is no one-off.

The new deputy speaker of the Lower House —  a man selected by Suu Kyi herself — is named T. Khun Myat. He’s an ex-militia chief widely accused of trafficking drugs. (Her party claims that “not all the accusations are true.”)

This election that kept warlords in parliament was, in former Secretary of State Hillary Clinton’s words, “an affirmation of the indispensable role the United States can and should play in the world.”

America’s stated goal for Myanmar is aiding the “pursuit of democracy, development and national reconciliation” — all thwarted by militias running parts of the country like fiefdoms. 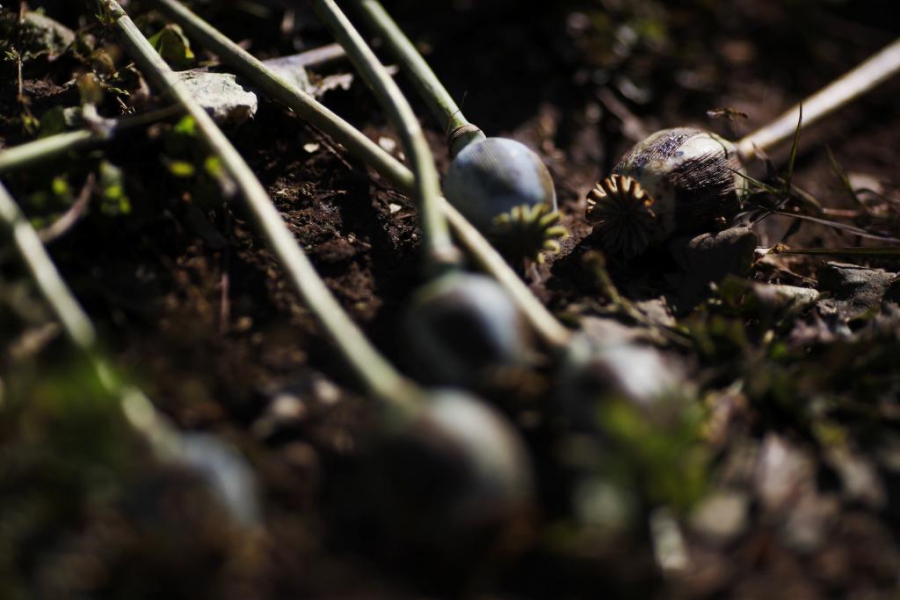 Destroyed poppy plants near the village of Tar-Pu in the mountains of Myanmar's Shan State, Jan. 27, 2012.

US President Barack Obama’s administration acknowledges that Myanmar has “failed demonstrably” to rein in its drug trade. But his response has been to sign special waivers allowing the US to fund and train narcotics police under the military’s command — the same military that oversees drug-producing militias in the hilltops.

This troubling paradox is impossible to shrug off. Even a top officer with Myanmar’s anti-narcotics agency, which now receives US cash and training, reluctantly admitted that army-backed militias are engaged in the drug trade.

“Are they [the military] producing drugs? No. But they are providing tacit approval for drugs to be produced in these areas,” says Whalen, the former DEA agent. “And they’re benefitting from relationships with high-level traffickers.”

Pat Jasan is leading the backlash. But, as a religious vigilante squad, they are not easy to embrace.

It is a movement that rages against lawlessness — all the while resorting to it each time it kidnaps a meth addict and forces him into shackles.

Nor do its tactics fit the narrative of a classic Myanmar uprising. But Pat Jasan’s goal — ending impunity for narco-militias — may be just as crucial as democratic elections.

This movement is not going away. As Tu Raw, the vigilante leader, explains it: The Pat Jasan struggle is akin to a “revolutionary war” whose crusaders must “fight this genocide by any means necessary.”