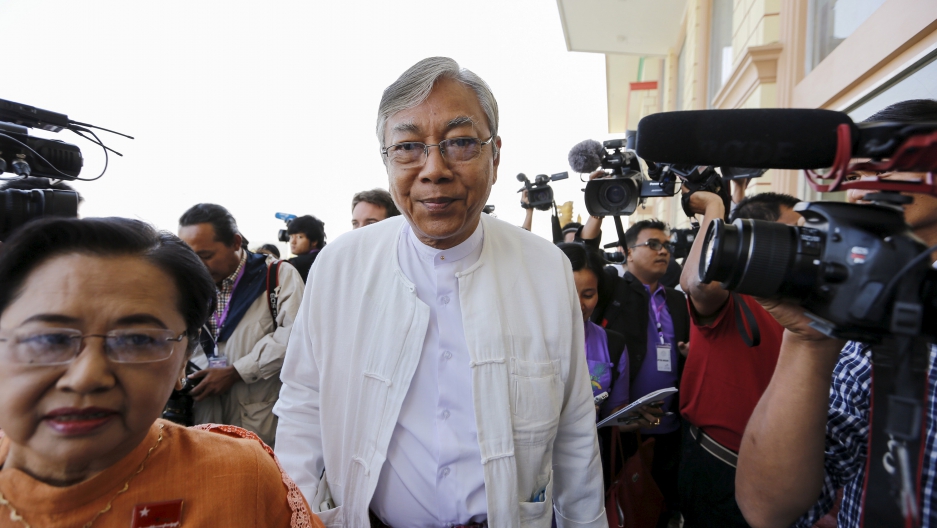 Ever heard of Htin Kyaw?

Neither have the vast majority of people in Myanmar, a country he’ll lead as president in a new democratic era.

His leadership, however, comes with a huge caveat.

Htin Kyaw will effectively serve as a puppet of Aung San Suu Kyi, the White House-backed idol swept to power by a landslide election in November. In Myanmar, she’s beloved as a symbol of resistance to the military, which mired the country in tyranny and poverty for decades.

Suu Kyi — the most famous person to ever emerge from Myanmar — would be president if only the military allowed it.

She is barred from the top job by a constitutional clause, written by the army with her in mind, that forbids politicians with foreign kin from the presidency. Her sons both hold UK citizenship. They appear unwilling to forsake it to help their mother achieve her long-held dream of leading as president.

So instead she will lead by proxy. Her pick: Htin Kyaw, a bespectacled 69-year-old with a mop of silver hair. He is known in political circles but not well recognized to the broader public. He was nominated on March 10 by her party, the National League for Democracy, which now dominates parliament, and officially elected president on Monday.

Htin Kyaw’s loyalty to his boss is unquestionable. He’s served as a trusted advisor and executive of an educational charity named after her late mother. His father also served her party as a parliamentary candidate; his wife is also an elected official with the party. He is firmly in her camp and is unlikely to challenge her orders.

Htin Kyaw is untainted by scandal and highly regarded by Myanmar’s political elites. On Twitter, one of Myanmar’s top historians, Thant Myint-U, calls him a “stellar choice, well respected, unimpeachable integrity and a very nice man.”

He’s also well-educated — a unique asset in a country with a broken school system after decades of neglect.

Htin Kyaw (pronounced “Tin Chaw”) holds a master’s degree in economics from Yangon University, the nation’s most prominent school of higher learning. He’s also studied at the University of London and the Arthur D. Little School of Management in Cambridge, Massachusetts.

Suu Kyi has not been subtle about her intent to lead the country through a trusted puppet. Having failed to pressure the still-powerful army to rejigger the constitution and grant her wishes to properly lead, she has openly proclaimed her plan to operate “above the president.”

Htin Kyaw’s job may be prestigious. But it is not terribly enviable.

On its Western coastline, a Muslim minority group, the Rohingya, have been forced into what amounts to muddy concentration camps patrolled by the army. In its northern hilltops, guerrilla warfare rages on. Throughout the country, child labor is obscenely common. Electricity is not.

These are the problems that Myanmar’s leadership must contend with. Htin Kyaw — even as a proxy — has his work cut out for him.