If you hear whale songs today, you might be getting a massage or a facial. Some recordings of humpback whales feature slow melodies soothing enough for spa soundtracks. But in the 1970s, whale songs ignited the passions of music listeners and animal activists.

Biologist Roger Payne still thinks whale songs are the most evocative sound made by any animal. But he may be biased --- he discovered them. In 1966, Payne got a recording from a sound designer doing research for the military on undersea dynamite explosions. Caught on the tape were some of the first recordings of sounds made by humpback whales.

Payne became obsessed with the recording, and made a startling discovery: the sounds were repeating. That means that they weren't just sounds, they were technically songs --- arguably the most complex songs made by any animal. Unlike birds or crickets, the whales' songs were ten minutes or longer and repeated without a break. 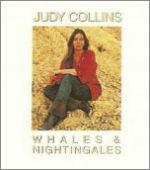 At the time, whales were being hunted to near-extinction, and Payne saw the discovery of whale songs as a call-to-arms. "Do you make cat food out of composer-poets? I think that's a crime." Over the following years, Payne pressed the recordings on musicians, composers, and singers, includingJudy Collins. "This tall man walked backstage," Collins recalls. "And he handed me this little package" with a tape of the humpbacks. "It was very emotional. They're so smart and have been here so long, and might have some insights about how we might live a better way."

In 1970, Collins used the recordings on her album"Whales and Nightingales", which went gold and introduced millions to whale song. On it, Collins sings with the whales "like a call and response, because I'm responding to them, and vice versa --- they are answering me as well." Collins devoted the royalties of those songs to Payne's conservation work. Other whale song records appeared. Pretty soon, you could hear them on counterculture-leaning radio stations around the country. Just as Payne hoped, these strange, evocative sounds inspired the growingSave the Whalesmovement, and by 1972 the US had banned whaling and whale products.

George Lipsitz, an American studies professor at the University of California, says the Save the Whale campaign was motivated by more than animal rights. At that time --- in the wake of the Kent State shootings, the assassinations of the 1960s, and the escalating Vietnam War --- people were questioning the very notion of progress and civilization. "It's almost like we were all looking for a kind of magic, an alchemy, to conjure a new world into being," Lipsitz says. "Music, and the thinking around it, had become so conventional. When you disrupt that, all things become possible."