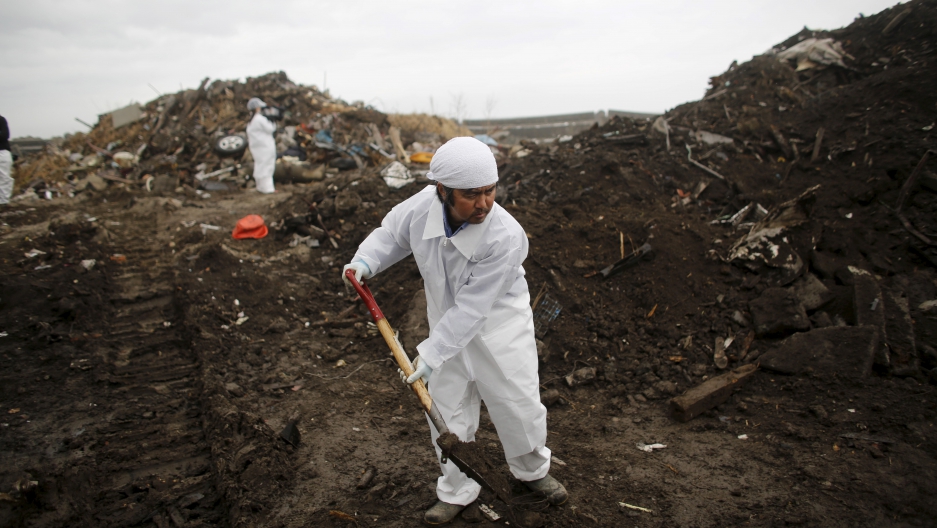 Norio Kimura, 50, who lost his father, wife and daughter in the 2011 tsunami, searches for his missing younger daughter Yuna near his home outside the tsunami-crippled Fukushima Daiichi nuclear power plant, Fukushima Prefecture, Japan, February 14, 2016.

Five years ago, a massive tsunami hit the coast of Japan, killing nearly 16,000 people and leading to the worst nuclear disaster since Chernobyl.

Tens of thousands of people are still displaced from homes near the crippled Fukushima Daiichi nuclear power plant, and workers are using shovels and rakes to remove radioactive topsoil from towns that may never rebound from the devastation.

Crews at the nuclear facility are building tanks to hold the tons of water that needs to be piped into the damaged reactors every day to keep nuclear material cool.

“The most striking thing is the enormous amount of water tanks that are now on-site,” said journalist Steve Featherstone, who visited the plant last fall while reporting for Popular Science. “If we’re looking at the most immediate problem in the near-term, it’s this water, because it can’t all be captured."

In addition to the cooling water, hundreds of tons of groundwater flows underneath the Fukushima Daiichi site and gets contaminated by nuclear material. Some of it cannot be captured and flows back into the ocean, Featherstone said.

In the mandatory evacuation areas surrounding the plant, 20,000 workers armed with shovels, rakes, clippers and hedge trimmers are removing contaminated topsoil and debris near buildings and playgrounds.

Featherstone said the remediation efforts are working in places like Naraha, the first town to be re-opened to residents in September. Radiation levels there have met the government’s threshold for the town to be re-populated.

But outside of town, radiation levels are much higher.

“If you go outside of these main areas, those weren’t touched,” Featherstone said.

About 167,000 people fled their homes during the nuclear meltdown. Today, about 100,000 people are still displaced, 80,000 of them because they are not allowed to return to their homes.

But Featherstone said he was surprised by the reasons keeping some people from moving back to the Fukushima region.

“[They’re] the social reasons,” Featherstone said, like a lack of family members and schools in their old towns.

“It’s really much, much more complicated than whether a certain level of radiation decontamination has been achieved,” Featherstone said.