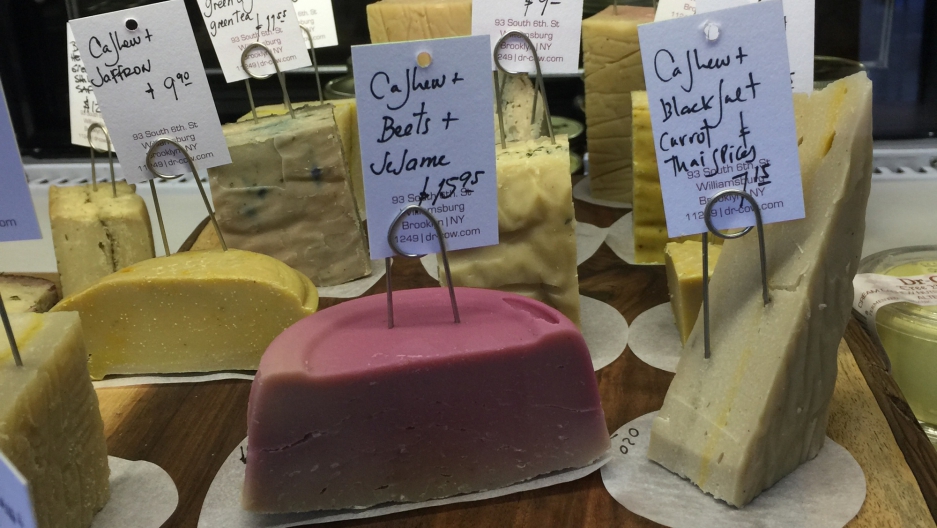 Ask an omnivore-turned-vegan which food was most difficult to surrender, and there's a good chance the answer will be cheese.

“It’s really the hardest thing for people to give up,” says Miyoko Schinner, author of Artisan Vegan Cheese. “I hear this all the time, wherever I go across the country.”

Schinner understands the reluctance. Before she became a vegan about 30 years ago, “I liked the richest, most indulgent — you know, funky, smelly, stinky cheeses,” she says.

She decided to create her own plant-based recipes, which she eventually compiled into her book and published in 2012.

Since that time, Schinner says, “little companies [have been] cropping up all over the country making hand-crafted vegan cheeses” — including her own, Miyoko’s Kitchen, which she founded in 2014.

Schinner and many other artisanal vegan cheese makers are choosing tree nuts — primarily cashews, but also Brazil nuts, macadamia nuts, hazelnuts and almonds — as their base ingredient, in part because they’re relatively high in fat and protein.

The goal isn’t necessarily to mimic specific dairy cheeses, but to create delicacies with some of the hallmarks of traditional artisanal cheese, such as a rich and creamy mouthfeel and funky, tangy flavors. To that end, some vegan cheese makers are using processes typically associated with dairy cheese making — namely, fermentation and aging — to capture the essence of what they think makes cheese, cheese.

“Whether or not [a vegan cheese] tastes exactly like, let’s say, Gruyere, you know, that’s debatable. And I don’t even know if, ultimately, that’s important,” says Schinner. “I think what’s important really is, just like there are thousands and thousands of small dairy creameries that are introducing new styles of cheese, the same can be done with vegan cheeses.”

The new products are far removed from the first commercial vegan cheeses that hit the market in the 1990s, says Schinner. Those early manufacturers took what she calls a “Kraft single approach,” combining oils and starches with stabilizers and thickening agents, resulting in products reminiscent of something “made more in a lab than in a kitchen,” and intended for deli-style use rather than gustatory indulgence.

“That’s great if you want to just throw it on a veggie burger or sandwich,” says Schinner, “but what about if you want to, you know, relax on a Friday night with a glass of wine and a nice cheese platter? You weren’t going to eat the equivalent of Kraft singles for that.”

A very basic approach to making tree-nut cheese involves first soaking raw nuts and blending them, perhaps with a little water, into a slurry. The slurry is inoculated with a bacterial culture that ferments sugars into acids, thus lowering the pH, which is responsible for the cheese’s sharpness or tanginess. (Note that this process is what’s considered “raw,” which means that temperatures remain below 118 degrees Fahrenheit.)

As a byproduct of fermentation, the bacterial culture produces certain flavor compounds that also impart the cheese with telltale taste. “It’s the cultures that really change the flavor profile” of any cheese, says Schinner. And different types and combinations of bacteria lend different flavors.

A popular strain for beginning vegan cheese makers is Lactobacillus acidophilus, which yields a fairly mild, not-too-sour cheese, according to Kaitlyn Misheff, who teaches raw vegan cheesemaking courses at Matthew Kenney Cuisine in California. Another option is to add a liquid called rejuvelac, which Schinner describes in her book as a fermented beverage made from whole grains, and which “contains a variety of friendly bacteria.”

Once transferred to a clean container, the inoculated slurry is left to ferment for around 36 hours, give or take, depending on ambient temperature (some cheese makers use dehydrators) and the desired taste of the cheese (generally speaking, shorter fermentations result in more mild flavors). After that, the cheese is formed.

The forms can then be left to age for several weeks in a controlled environment. After that amount of time, the cheese is “usually a little bit more dense, a little bit more firm, the flavors have really developed, and the texture is just much different” than cheese immediately served after fermentation, says Misheff. 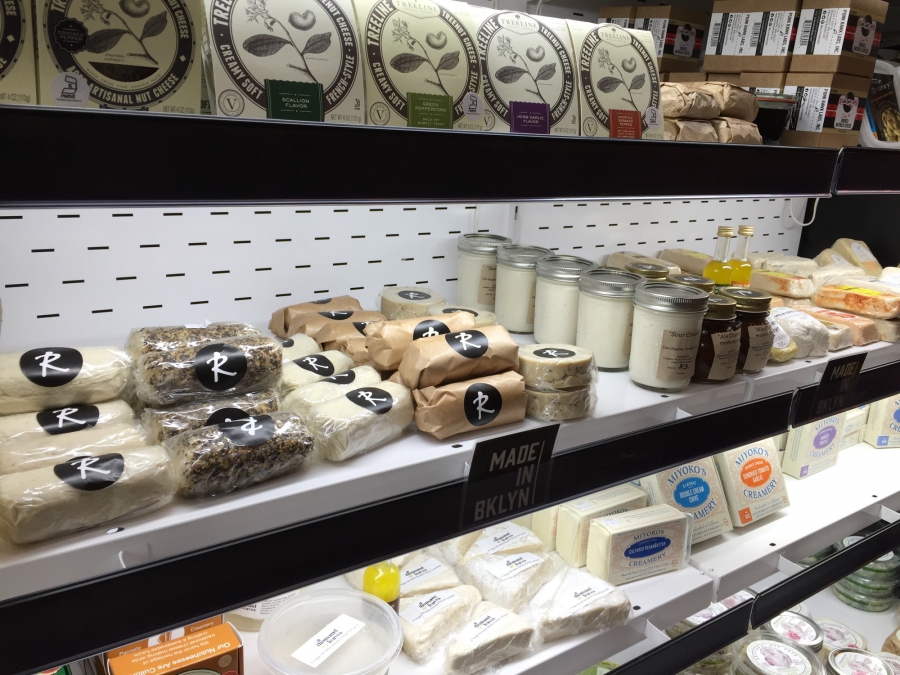 Many vegan cheese vendors, however, will refine this basic approach to improve the flavors, textures and richness of their products.

For instance, “the proteins in nuts don’t really like to gel very well,” says Chris Young, a self-professed dairy cheese aficionado and the co-founder of ChefSteps, a culinary technology company. So vegan cheesemakers often include a starch such as tapioca starch or potato starch to help the nut base coagulate, which contributes to the overall texture.

Coconut oil also wends its way into recipes as an additional source of fat. In dairy cheese, “the fat tends to soften the gel [the congealing milk] and make it more supple,” says Young, who’s also the principal co-author of the encyclopedic Modernist Cuisine: The Art and Science of Cooking. “If you’re using a nut, especially a nut that doesn’t have a lot of fat in it, you often need to add some fat or oil to try to get a more pleasing texture.”

To evoke a savory flavor — a characteristic of many aged dairy cheeses — some vegan cheese makers will also add nutritional yeast, which provides a source of amino acids that lend that umami taste.

Artisanal vegan cheese makers might also experiment with different bacterial strains. For instance, Miyoko’s Kitchen uses three different bacterial blends. “One of them kind of has a buttery note, another one has kind of a sharper, harsher note, etcetera,” she says.

Different cultures not only produce different flavor compounds as they ferment, but they will acidify the nut base to varying extents.

The same idea applies to fermented vegan cheese. Dr-Cow, a vegan cheese shop that’s been operating for two years out of Brooklyn, lets its tree-nut cheeses age for a minimum of two months, while Punk Rawk Labs, a Minneapolis-based company, ages its cheese for several days, on average.

Most vegan cheesemakers are small outfits (this writer spoke with several who work in kitchens the size of a walk-in closet or New York studio apartment). Perhaps the biggest operation, however, is the Hayward, California-based Kite Hill, at about 50 employees.

Kite Hill takes an approach to plant-based cheesemaking that closely parallels a traditional dairy process. They first grind the almonds with water to create a milk that’s subsequently pasteurized. After adding signature bacterial cultures, they add a proprietary enzyme that acts in a manner similar to rennet, an enzymatic complex that causes dairy milk to coagulate.

The enzyme slices up certain proteins in the almonds, causing them to mesh together in a way similar to casein, a family of milk proteins, according to Jean Prevot, Kite Hill’s vice president for manufacturing and operations. Once the curds form, the company separates the whey and molds the curds. Then they place the molds in imported European climate-controlled facilities designed precisely for aging cheese.

“We’re not trying to be a substitute” for dairy cheese, says Prevot, who worked for 15 years in dairy and cheese factories and for two more years at a goat cheese creamery. “I think we’re trying to make a product that is as good as or better than dairy products,” he says.

Of course, “just like with any other cheese, it just really depends on someone’s personal taste,” says Michaela Grob, the owner of Riverdel, a Brooklyn-based vegan cheese purveyor. “There’s such a variety out there, there’s something for everyone.”

For instance, while Serious Eats’ managing culinary director J. Kenji López-Alt was unimpressed by certain vegan cheese products (which included non-artisanal ones) — “some are downright abysmal, with a tofu-like flavor or watery, grainy interiors,” he remarked in a post last year — he did praise a couple.

One was Kite Hill’s Soft Fresh Original, which has a “bright, fresh flavor,” and the other was the Classic Double Cream Chive made by Miyoko’s Kitchen, which possesses “a lightly crumbly but creamy texture with a buttery finish very similar to goat cheese.” These products, he wrote, “are not just good-for-vegan food, but are good enough that anyone should be happy eating them.”

As Schinner sees it, that’s the goal: to create a delicacy “you’d be proud to put on a high-end cheese platter and serve to any omnivore.”