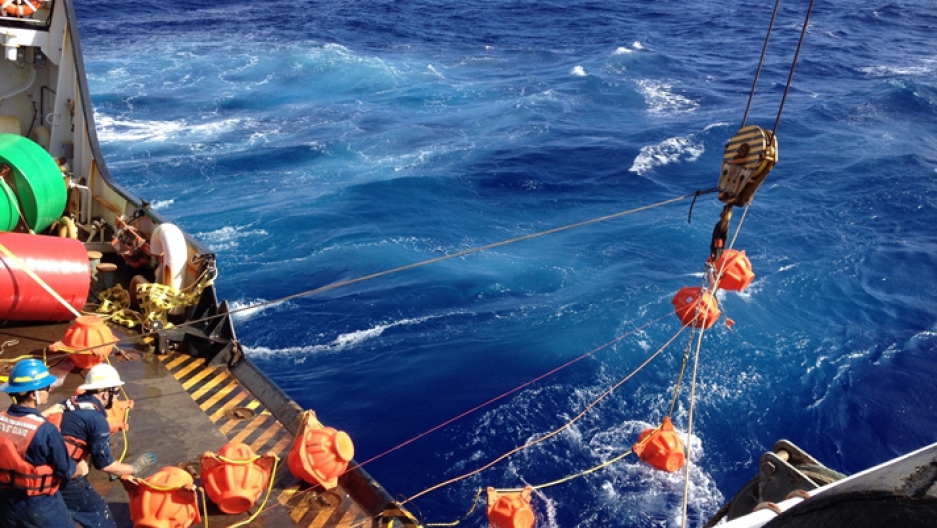 NOAA workers haul up the hydrophone in the Pacific Ocean in 2015.

Courtesy of the National Oceanic and Atmospheric Administration

Humans for the very first time have an idea of what the deep sea sounds like, far away from the world of people and machines.

And it’s not at all what scientists expected.

“I expected it to be very, very quiet,” said Robert Dziak, a research oceanographer with the National Oceanic and Atmospheric Administration.

Last July, Dziak led a NOAA team that sunk a hydrophone into the deepest place in the ocean: the bottom of the Mariana Trench, near Guam, seven miles down in the Pacific.

"The Mariana Trench is this very narrow canyon or trough, so unless the sound is directly over the top of the trough, it's very difficult for the sound to propagate all the way down into the bottom of that basin,” Dziak said. “So it was a bit of a surprise that there was such ample sources of sound down there."

From the bottom of the trench, it also recorded a baleen whale calling from near the surface:

And it captured an earthquake happening above:

There was a scientific reason for all this deep-sea snooping.

"It's been known that sound in the oceans has been increasing since the late 1960s, and mostly man-made sound," Dziak said. "This is thought to [be] because of an increase in container shipping with an increase in global commerce."

Man-made noises are changing the habitat for undersea creatures, and may be making it harder for animals like dolphins, whales and fish to communicate and navigate.

But Dziak says there haven't been good measurements of exactly how loud the deep ocean is.

“We did this work largely to get a baseline measurement now in what should be, we think, one of the quieter spots on Earth, so we have something to compare in the future when we make measurements down the road, so we can see how things are changing,” Dziak said.

Dziak's colleagues at NOAA will send the deep-sea recorder down into the Mariana Trench again in summer 2017.

They'll send a camera along too, to capture images along with those sounds of the deep.