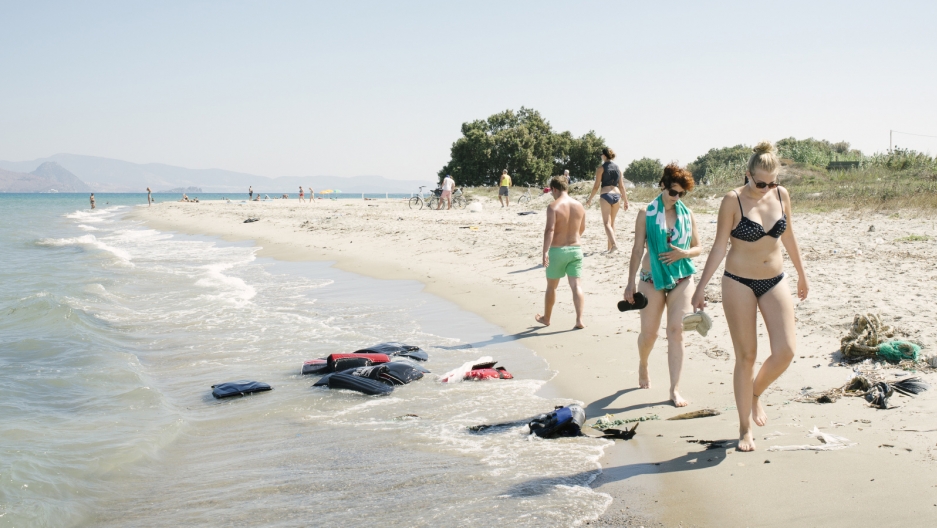 Tourists walk past life preservers on the beaches of Kos, Greece.

On the northeastern shore of the Greek island of Kos, you'll find beaches where refugees coming from nearby Turkey land. The beautiful beaches are also a huge vacation spot on an island where the largest economic force is tourism.

The situation in Kos offers striking visuals. Refugees, fleeing Syria, Iraq, Afghanistan and elsewhere, are landing on the same beaches where tourists, who booked their long-awaited holidays, bask in the sun enjoying their vacation.

"I didn’t expect it to be that drastic — like the two worlds colliding," says German photographer Jörg Brüggemann.

Brüggemann traveled to Kos last August as Kos was making international news for the massive influx of refugees and migrants. In a collection of images Brüggemann titled "Tourist vs. Refugees," you see the reality of Kos — people take their vacations amidst refugees landing on European soil after harrowing journeys across the sea from Turkey.

But seeing tourists on vacation in the same frame as refugees is a little jarring.

"The thing with the tourists is, I guess a lot of them were actually already considering canceling their holiday because Kos was so big on the news," Brüggemann says. "But a refugee crisis is not like a nature catastrophe — a reason to cancel your holiday and get your money back. So a lot of people stayed with their booked holiday. They obviously knew what was going on — at least the ones that we met when we went there."

While some people Brüggemann met ended up spending their vacation helping the refugees — distributing food and aid. But, he says he encountered others who completely ignored was was going on. And depending on what part of the island you vacationed, it's possible to not see any refugees at all.

"I don’t blame anyone for that," he says. These are people who have hard earned their holiday over the year and then have like two weeks in the sun in Greece they obviously want to enjoy it. So if you’re on the other side of the island, you wouldn’t see anything of the refugees if you don’t go on purpose to the capital — there were obviously these people that would do that."

Brüggemann's images tell many stories. But one story is not about the differences between those on vacation and those escaping war, it's about how people are just people.

"Obviously it was very drastic conditions that these people were in, but at the same time they were also enjoying their life," Brüggemann says. "Some of them (the refugees) were camping at the beach and in Kos’ capital and they would use the life boat that they used to get over from Turkey to Greece to go swimming. They were just enjoying it the same way tourists were."

With the massive migration of refugees coming to Kos and nearby Lesbos, there have been images that capture the attention of the global media. In September there was the unforgettable image of 3-year-old Aylan Kurdi, who died face down on the beach while trying to reach Kos.

And there are other photos from Kos and Lesbos where photographers are there every day on the beach waiting for the boats to arrive. These are important images because they show the misery, suffering and tragedy of the refugee crisis. But Brüggemann says when all you see are these kinds of images, people can lose their empathy. They don’t really touch you anymore.

Brüggemann wanted to find another way to tell this story.

"Getting the idea of the tourist into that series, was for me, in that sense important because it makes it possible to relate to that whole story again," he says. "It drags you in because you could be that tourist. You could be these middle class people that go to Greece to have their holiday. I could be that. And all of a sudden you feel related to that story and you see how they react to what they see on that island. And I feel that gets a lot more personal. Well I hope it gets a lot more personal through that. And that was probably the one thing that was most important to me."