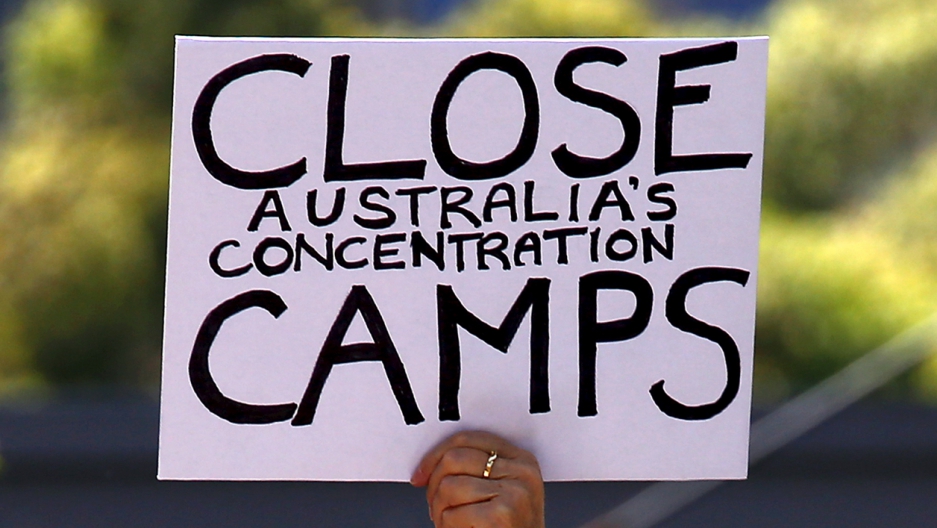 A protester holds a placard in support of refugees during a rally in central Sydney, Australia.
Credit: David Gray
Share

Australia’s embattled immigration department has come out swinging over what it claims are mistruths and falsehoods about its much-criticized treatment of asylum seekers, but in the process has caused a new controversy.

In a statement intended to “set the record straight” about critics' “emotive and inflammatory claims” about conditions inside Australia's controversial offshore detention centers, according to some who saw it, Department of Immigration and Border Protection Secretary Michael Pezzullo appeared to question whether Nazi atrocities actually happened.

Here's the offending paragraph taken from the statement, "Immigration detention and children: separating fact from fiction," which was written by Pezzullo and posted on the department's website this week.

“Recent comparisons of immigration detention centres to ‘gulags’; suggestions that detention involves a ‘public numbing and indifference’ similar to that allegedly experienced in Nazi Germany; and persistent suggestions that detention facilities are places of ‘torture’ are highly offensive, unwarranted and plainly wrong — and yet they continue to be made in some quarters,” Pezzullo said.

The word "allegedly" quickly caught the attention of Twitter users, who used it to attack immigration authorities over what many, including the United Nations, see as the inhuman detention of asylum seekers.

BorderForce out themselves as Nazi apologists with 'alleged' holocaust quote #auspol

Why does alleged incompetent moron Michael Pezzullo still have a job? #borderforce

Immigration officials quickly followed up with a clarification saying that "any insinuation the Department denies the atrocities committed in Nazi Germany are both ridiculous and baseless."

Ultimately, the controversy may have drawn some attention from the actual content of the statement itself, which critics of Australia's migrant detention program will likely consider inflammatory and misleading.

The department's statement was an apparent response to the #LetThemStay campaign, which is challenging the government's decision to send more than 200 asylum seekers, including dozens of babies born in Australia, back to the detention center on the Pacific island of Nauru.

According to Pezzullo, "No child will be returned to a place of harm." That, however, contradicts the view of the department’s very own top medical adviser, who said last month that keeping children in detention had a “deleterious” impact on their mental well-being.

“For that reason, wherever possible children should not be in detention,” Dr. John Brayley told a Senate hearing.

The appalling conditions inside Australia's detention centers on Nauru and Papua New Guinea's Manus Island, and the deteriorating mental health of many of the people held there, are well documented and have drawn scathing criticism. Some human rights organizations accuse the government of breaching international laws.

A UN report found detainees were being held in "cruel," "inhuman" and "degrading" conditions, and even Australian lawmakers said conditions on Nauru were not "appropriate or safe" for detainees.

Pezzullo insisted in the statement that "all transferees and refugees" in the detention centers receive "appropriate mental health care." He also highlighted the "significant improvements" to infrastructure, education and health services on Nauru since December 2014.

Yet some medical staff who have worked at the detention centers disagree.

"I saw a 6-year-old girl who tried to hang herself with a fence tie and had marks around her neck. I've never seen a child self-harm of that age before," pediatrician Dr. David Isaacs, who worked on Nauru, told the Australian Broadcasting Corporation last year.

“While often repeated, this claim is also wrong and unsupported by any facts,” Pezzullo wrote.

But the Australian Border Force Act, which was implemented last year, says detention center employees could face up to two years imprisonment for disclosing “protected information.” Many believe that could result in whistleblowers going to jail if they disclosed abuses at the centers.

Pezzullo also accused “some media” and other commentators of overlooking "the facts."

“Significant progress has been made over the past year to move children and their families from detention into the community. As I write, there are now 58 children who arrived by boat in held detention, down from a peak of almost 2000 back in 2013,” he said.

Many would argue even one child in detention was too many.