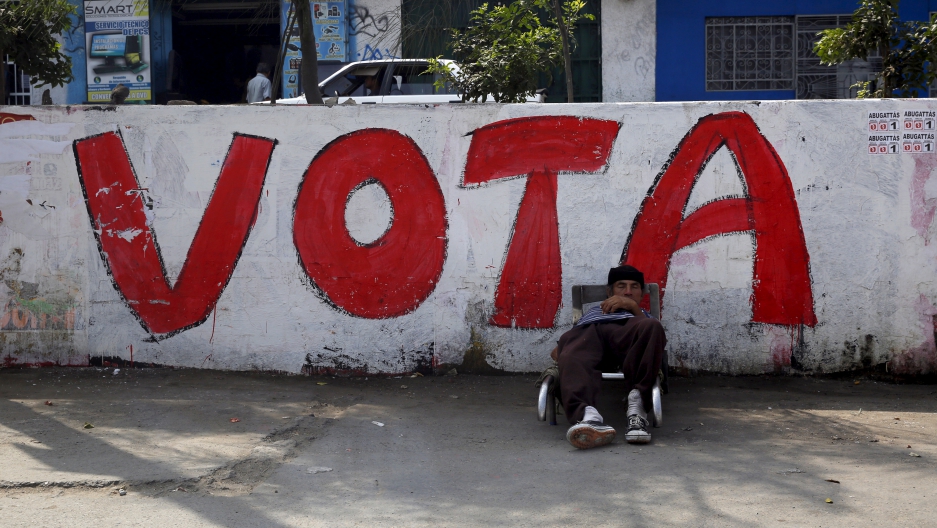 A man rests near a sign that reads "vote" on a street in Comas on the outskirts of Lima, March 4, 2016.
Credit: Mariana Bazo
Share

LIMA, Peru — Peru’s presidential elections are at risk of descending into farce after authorities here yanked two of the leading five candidates from the race.

The Special Electoral Tribunal (JEE by its Spanish initials) ruled that second-placed Julio Guzman hadn't legally registered his candidacy last year, because his nomination failed to comply with the minutiae of complex red tape.

The pair had until Monday to appeal the decision, which both of them were doing. Another panel, the National Electoral Tribunal (JNE), now has until Thursday to make a final decision. Experts believe the JNE will likely uphold the lower court’s decision.

The move to keep the two candidates out of the race would be nearly unprecedented in Latin America — other than in deeply troubled Venezuela and communist Cuba, where undemocratic regimes lock up political opponents.

It’s particularly galling for many Peruvians because Guzman, a center-right policy wonk who has taught at Georgetown University and the University of Maryland, had recently emerged from a crowded pack as the one challenger looking capable of beating frontrunner Keiko Fujimori in the June 5 runoff vote.

David Sulmont, a politics professor at the Pontifical Catholic University of Peru, was scathing about the JEE’s decision, which he warned could undermine Peruvian democracy.

Few are shedding any tears for Acuña, who has long been at the center of massive controversy. A self-made millionaire who owns several private universities, it emerged during the campaign that he had allegedly plagiarized his masters’ and doctoral theses — and an entire book on education policy.

To complicate matters further, the JEE is now investigating allegations that Fujimori also gave out cash at her campaign meetings. Meanwhile, former president Alan Garcia, languishing in the polls with just five percent, also faces complaints that various misdeeds during his previous terms should see him excluded.

Many here will be watching how Fujimori’s case unfolds.

If nothing happens, voters will likely conclude the elections are rigged in her favor. And if she is excluded, even some of her opponents may lament losing the chance to beat her democratically in the voting booth.