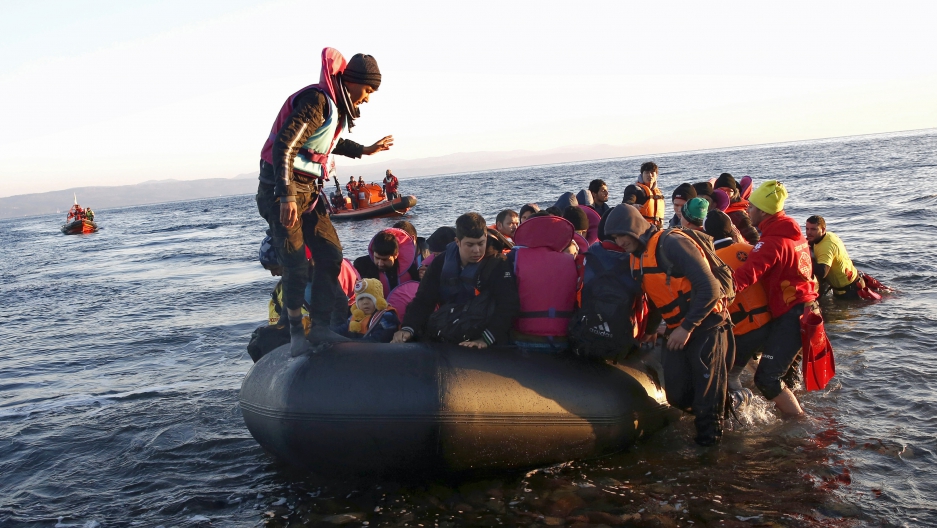 Afghan migrants arriving by boat on the Greek island of Lesbos. Under the new plan, all such migrants would be denied the right to claim asylum in Greece, and would be deported to Turkey.

Under new proposals agreed to this week by Turkey and the European Union, all migrants arriving illegally by boat in Greece will automatically be deported back to Turkey, regardless of their background or circumstances.

For every migrant sent back, however, the EU will accept a Syrian refugee from refugee camps in Turkey. Those who have attempted to enter Europe illegally would go to the back of the line.

Effectively, the scale of Europe's Syrian refugee resettlement program would be determined by the scale of people trafficked on its southern border.

The idea is intended to break the "business model" of people trafficking into Greece, by reducing the incentives to enter Europe by boat. It is also intended to introduce more fairness to the system by granting asylum to refugees on merit, rather than on their ability to pay traffickers or survive a sea crossing.

Nevertheless, the plan has already come under severe criticism, according to the BBC’s Damian Grammaticus. “There is a really serious legal issue here. Just describing people arriving here as ‘illegal migrants’ is problematic,” he said. “Under international law, if you say ‘I am fleeing persecution,’ there is an obligation to hear your case."

Amnesty International described the deal as "death blow" to the right to claim asylum. Iverna McGowan, head of Amnesty International’s European Institutions Office, accused EU and Turkish leaders of "horse trading away the rights and dignity of some of the world’s most vulnerable people."

Her statement went on to say that the plan was “not only dangerously dehumanizing, but also offers no sustainable long-term solution to the ongoing humanitarian crisis.”

The proposals have also attracted attention for the dramatic concessions they include to the Turkish government. Turkish citizens will now be allowed visa-free travel to the EU from June 2016, and long dormant plans to discuss EU membership to Turkey will be revisited. Aid to Turkey by the EU will also be accelerated.