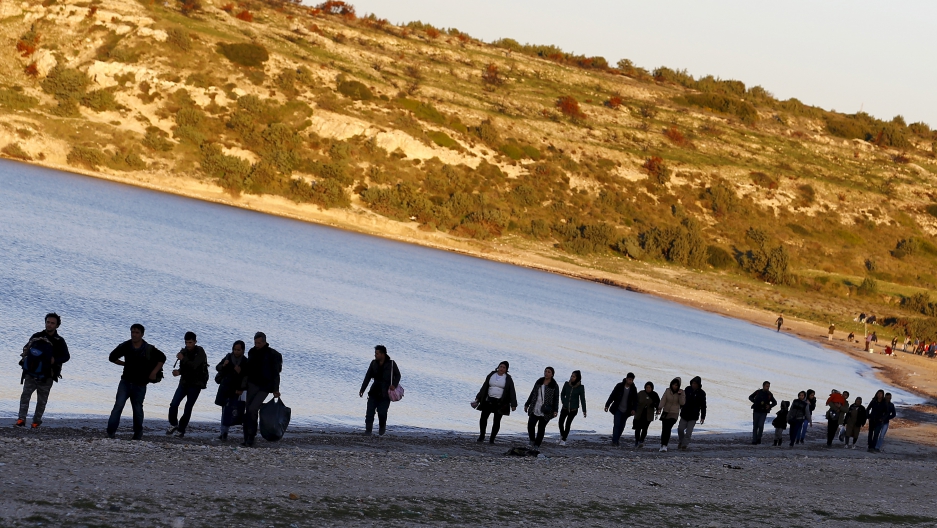 Refugees walk along a beach before trying to travel to the Greek island of Chios from the western Turkish coastal town of Cesme, in Izmir province, Turkey, March 5, 2016.
Credit: Umit Bektas
Share

The EU's proposed deal with Turkey is meant to finally ease the migration crisis that has caused chaos in Europe, but plans to send back all migrants arriving in Greece have raised serious legal doubts.

Why was the deal hailed as a 'game-changer'?

Turkish Prime Minister Ahmet Davutoglu and EU President Donald Tusk were among a series of top officials to call the proposals backed by EU leaders at a summit on Monday a "game-changer."

The key point is that Turkey, the main launching point for the more than one million migrants who have come to Europe since the start of 2015, has agreed to take back all migrants who land on the Greek islands.

Both sides say that this will "break the business model" of people smugglers who send migrants across the Mediterranean on flimsy boats -- more than 4,000 refugees and migrants have died so far.

But the most controversial part of the deal is the "one-for-one" arrangement: for each Syrian refugee taken back by Turkey from Greece, the EU agrees to resettle one Syrian refugee from the camps on Turkish soil where 2.7 million Syrians currently live.

The hope is, if refugees know there is a mechanism by which they can be directly resettled from Turkey to Europe then they are less likely to attempt the perilous journey across the Aegean.

The resettlement places would be taken from an existing EU plan to resettle 22,000 Syrians from neighbouring countries (only 3,000 have been resettled so far) and from 54,000 unallocated places from a slow-moving EU plan to redistribute refugees from Greece and Italy (only around 800 relocations have so far taken place).

Critics of the plan immediately questioned whether it would meet EU and international law on the treatment of refugees, especially as Turkey is not a full signatory to the Geneva Convention on refugees.

The UN refugee agency chief swiftly said that he was "deeply concerned" by any plan that involves the blanket deportation of refugees without respect to their individual cases.

European Commission chief Jean-Claude Juncker however insists that the plan is legal.

Despite that, several EU countries have voiced doubts that the scheme could be challenged in the European Court of Human Rights -- even if that could take years to come to court.

Similar mass deportations of Tunisians from Italy in the past have been ruled illegal.

Rights group Amnesty International said that the EU-Turkey plan was a "death blow to the right to seek asylum".

The UN children's agency said that children represented 40 percent of arrivals in Greece.

What's at stake for Turkey?

Turkey has been highly critical of the West's response ever since the start of the Syrian war in 2011, and has particularly accused the EU of closing its doors to refugees.

After the body of drowned three-year-old Syrian boy Aylan Kurdi was washed up on a Turkish beach last year, Turkish President Recep Tayyip Erdogan accused the EU of turning the Mediterranean into a "cemetery."

Turkey certainly caught EU leaders on the hop with its last-minute summit proposals — which were backed by Germany — which also include doubling EU aid to six billion euros to 2018.

But European sources say they believe Turkey, increasingly confronting Russia over Syria and trying the patience of its allies, needs friends in the region and was keen to build bridges with Brussels.

German Chancellor Angela Merkel was widely suspected of having a hand in the Turkish proposal, as it emerged after she and Netherlands Prime Minister Mark Rutte met Davutoglu on the eve of the summit.

Merkel — under pressure at home and abroad over her open-door asylum policy — has long championed a deal with Turkey as being central to resolving Europe's migration crisis.

Other European leaders are far less keen, worrying about human rights in Muslim-majority Turkey under an increasingly authoritarian Erdogan.