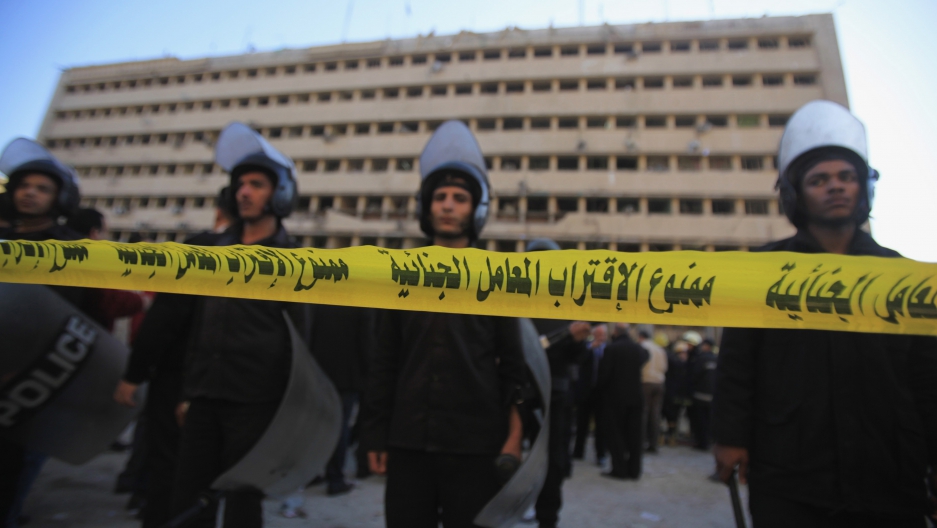 CAIRO, Egypt — It’s not uncommon for young Egyptians to weigh the pros and cons of violent jihad.

Abdullah, a graduate student in Cairo who asked that his last name be withheld to avoid problems with the authorities, says he’s thought about it. Although he’s working toward a degree, he’s concerned there won’t be many jobs waiting for him after school.

The options for getting involved in terror, meanwhile, are plentiful — and each group promises different rewards for recruits.

On the one hand, there’s Ajnad Misr, an independent Islamist terror group operating in Cairo.

“The benefit of Ajnad Misr is the ability to stay at home and have the excitement of being in an active or sleeper cell right under your parents’ noses,” said Abdullah.

Formed in 2013 after Egyptian security forces raided the camps of activists who protested the ouster of former Muslim Brotherhood member and Egyptian President Mohammed Morsi, Ajnad Misr’s profile is relatively low compared to groups like Wilayat Sinai, an Islamic State-affiliated organization that took credit for the downing of a Russian commercial airliner in the Sinai Peninsula last year. That allows Ajnad Misr members more individual freedom.

But membership in Wilayat Sinai carries benefits, too.

“Joining the Wilayat Sinai means a real cash payment, [but] disappearing from home either temporarily or forever because the army is effectively hunting those guys,” said Abdullah. Ajnad Misr allows more freedom.

Abdullah claimed he has no intention of becoming a terrorist. But his awareness of the options illustrates how seriously some young people here are thinking about joining extremist groups. Violent Islamist ideologies are popular in Egypt and elsewhere in the Middle East right now, despite severe repression from the government and the terrorists themselves.

By word of mouth and on the internet, terror recruiters offer fame and fortune at a time when career opportunities are in short supply even for educated Egyptians.

From the Middle East and Africa to South Asia, competition to recruit would-be militants is more intense than ever among extremist groups, according to a recent Brookings Institution Doha Center report. Terrorists are aware that young men and women inclined to extremism have options — and that means groups need to stage increasingly more spectacular attacks to snag the best recruits.

“The dramatic recovery of the Islamic State group (IS), its expansion into Syria, and its proclamation of a Caliphate crossing established international boundaries set the stage for the intensive intra-jihadi competition seen today.”

Since 2006, when the group that would become IS broke away from Al Qaeda — whose leaders were critical of their brutality — the group that now controls a third of Iraq and Syria has been jockeying with other terrorists for members and spheres of influence, the report states.

In addition to its Egyptian chapter, IS fighters are threatening to take control of Libya in the vacuum created by that country’s civil war. The group has also crept into Yemen, where Al Qaeda in the Arabian Peninsula is fighting a Saudi Arabia-led coalition.

In Nigeria, the Islamic State has allied with Boko Haram. Al Qaeda, meanwhile, has partnered with Al Shabab, a terror group that operates in Somalia and elsewhere in East Africa, as well as Al Qaeda in the Islamic Maghreb, which recently pulled off attacks on hotels in Mali and Burkina Faso. The Islamic State appears to have gained influence with members of the Al Qaeda-affiliated Pakistani Taliban and Afghan Taliban, too, as different factions of those organizations are at odds with each other.

As a result, smaller terror groups are often under pressure to stage attacks not only to pursue their avowed strategic and ideological goals — like bringing Sharia law to the Horn of Africa — but to demonstrate their mettle to other terrorists and their own members.

When Al Shabab militants killed 148 people at Garissa University in northeastern Kenya a year ago, they told their hostages they were retaliating against Kenyan peacekeeping troops that were taking part in offensives against Al Shabab in recent years.

“Tell your government to leave us alone,” said one of the Al Shabab fighters, according to Garissa student Ann Musyoka, who was at the attack. “We will continue to stage attacks until your soldiers leave Somalia. They have said we’re a weak militia but we are not. We shall make the streets of Kenya run with blood.”

The incident did in fact demonstrate Al Shabab’s weakness, said experts — driven by desperation to tell other extremists and its own members that it was still capable of staging attacks. Kenyan troops have knocked the group on its heels, reducing the territory it holds in Somalia to rural areas.

“They want to become relevant,” said Edward Waswa Kisiang’ani, a political scientist at Kenyatta University. “Al-Shabab is seeking attention and wants to prove to other groups [like Al Qaeda] that they are still strong.  They want to show their supporters that they have the ability to carry out the goals that they’re supposed to be doing.”

Disillusionment with the group is clear from its declining membership. Around 1,500 Kenyan youths recently quit Al Shabab and accepted an offer of amnesty, the Kenyan government announced last month. “Their followers are escaping from their camps, and they are surrendering to the government,” Waswa Kisiang’ani said.

The Pakistani Taliban, which has close ties to Al Qaeda, has also struggled to stay cohesive amid internal divisions and government efforts to stamp them out.

Members of the Pakistani Taliban have also claimed to have pledged allegiance to IS, an alternative that appears stronger and more focused compared to the Pakistani Taliban, experts say. Across the border, the Afghan Taliban and the Islamic State are fighting for influence, too. The Taliban doesn’t want to cede personnel or territory to any other groups, even one that shares its apocalyptic vision of a radically orthodox theocracy.

“Due to this rivalry, their recruitment drives have suffered,” said Rahimullah Yusufzai, Peshawar-based journalist and expert on terror in Central and South Asia. “[The Afghan Taliban] are not able to recruit as many people as they’d like to. They are using propaganda, resources, and the internet, but still they are falling short.”

Even though its presence in South Asia is minimal, the Islamic State might be more attractive to disgruntled Pakistani and Afghan Taliban members because the groups’ ties to Al Qaeda haven’t always yielded the weapons — i.e., suicide bombers — needed to wage jihad, said Yusufzai.

Yusufzai recalled meeting Maulana Fazlullah when he was leader of a small terror operation in Pakistan’s Swat Valley. He wanted then-Pakistani Taliban leader Baitullah Mehsud — whom an American drone killed in 2009 — to send him suicide bombers. He was disappointed.

“Not every militant group has suicide bombers,” said Yusufzai. “[Fazlullah] told us he was waiting for suicide bombers to come from Waziristan [a mountainous region of Pakistan]. In fact, he looked very angry and desperate that Baitullah Mehsud was not sending them the suicide bombers.”