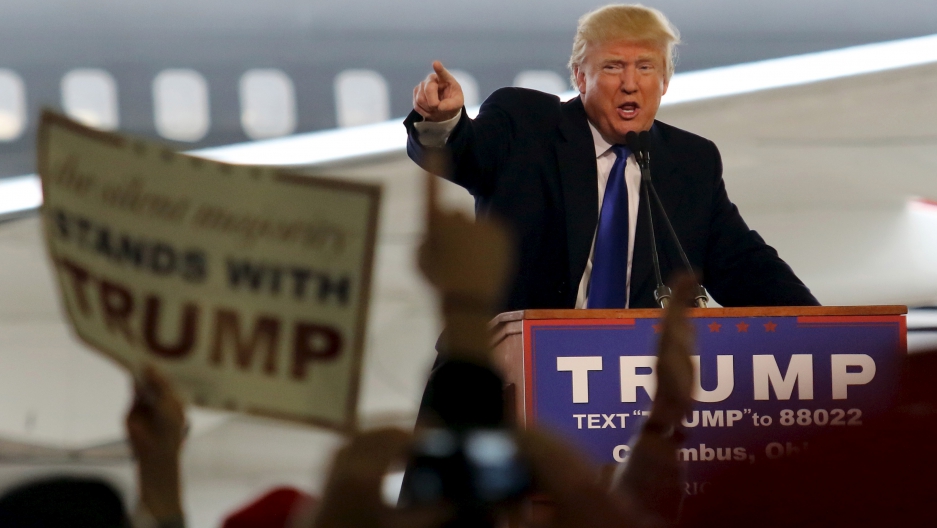 This week's theatrics surrounding the Republican primary generated lots of news and terabytes of political Internet arousal. But it has proven one thing: There is no way out of this nightmare for the GOP.

If arousal seems like an overly ambitious noun, you'll remember this moment from Thursday night's GOP primary debate. Traditionally, debates are time for voters to take the measure of candidates, not for candidates to take the measure of themselves. But in a year when new lows are consistently delivered, Donald Trump's theatrics weren't the worst of it for the party.

Earlier in the day, the nation watched as the GOP's last presidential nominee took to a stage in Utah to call its current front-runner "a phony, a fraud" and unfit to hold office. Never mind that four short years earlier, that very same Mitt Romney courted, received, and reveled in the Birther glow that was Donald Trump's political offering. The irony of Romney's broadside (and Paul Ryan's, and Mitch McConnell's earlier this week) is that their party fostered and encouraged much of the anger and rejectionism that fuels Trump's candidacy today.

The sub rosa developments are even more telling. In the days since the GOP establishment undertook a concerted effort to block Trump's path to the nomination, it's become increasingly obvious that none of his remaining opponents can bank on amassing enough delegates to defeat him outright for the nomination. There is now open talk among Republicans of finding a way to challenge Trump on the floor of the party convention in July and deny him the nomination.

Can it work? Who knows. One scenario assumes Trump fails to win a majority of available delegates going in and is thus contested. Even that eventuality is looking increasingly narrow. Trump leads by a lot in Florida and by a little in Ohio. Wins in those places make him all but unstoppable.

So the second scenario involves keeping enough Trump delegates from voting on a first ballot at the convention that a savior candidate (Ryan? Romney?) swoops in to grab the nomination and save the day.

But save the day it won't. As thrilled as establishment Republicans would be with either of those two scenarios, take a second to imagine the reaction from millions and millions of voters who backed Trump, only to see their choice invalidated by insidery convention chicanery. Best case reaction? They all stay home in November, convinced the GOP cares nothing for their choices nor for them. Enough Republicans could still come to the polls to prevent the GOP from losing control of the Senate. Worst case? Given the atmosphere of some of Trump's rallies in this campaign, the worst case is far more violent and frightening.

But here's why I say no way out: The most likely outcome still is a Trump nomination, a prospect that has many Republicans resigned to losing the White House to a Democrat, but it also has them terrified of losing control of the Senate.

The less likely outcomes of a contested convention carries the advantage of a more stable and respected nominee, but only at the cost of alienating millions of people who've already, and will yet, cast primary votes for Trump.

Meanwhile, talk of danger for incumbent Senate Republicans is metastasizing beyond the Senate in swing states like Wisconsin, Illinois, and New Hampshire. For decades, Senator John McCain has had a lock on re-election in Arizona. He's currently facing an anti-incumbent atmosphere that could be a problem. And veteran Republican Judiciary Committee Chairman Charles Grassley, who has refused to hold hearings to vet any Supreme Court nominee President Obama could pick, has new reasons to worry about his re-election back home in Iowa.

As America and Republicans watch the Trump candidacy march on, it's become increasingly difficult to see how the GOP can escape from its peril. Try to derail Trump, and they face the disgust of his millions of supporters. Fail to defeat him, and they face a general election behind a candidate their previous two nominees call "dangerous."

Unless Democrats stumble and self-destruct, its hard to see where the exit is.