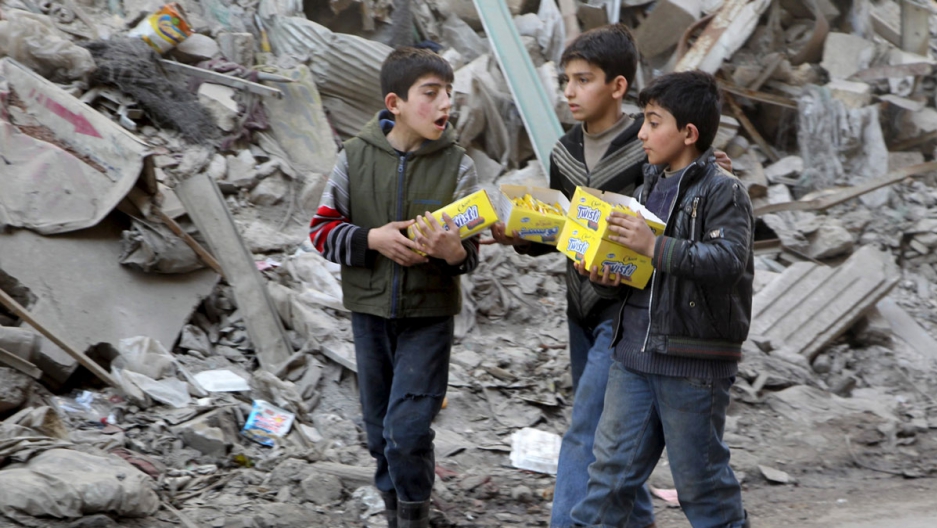 Boys carry boxes of biscuits near rubble of damaged buildings in Aleppo, March 2, 2016.

Six days into a fragile cease fire in Syria, daily life is slowly returning. But although Russian airstrikes have stopped pounding the country, leaving room for some respite, many Syrians are worried about what comes next.

In rebel-held Aleppo, a 25-year-old woman named Zein describes the hopes and fears of the people around her. Zein is an activist and a humanitarian aid worker, and she was part of a story that aired in January about women in Syria.

She says Aleppeans are not rushing out to celebrate and bask in the sun, even though they had grown tired of hiding in basements for weeks. But Aleppeans are doing something they had not done for a long time: protesting peacefully in the streets.

“It reminds me of the beautiful good old days,” Zein says, referring to protests before the uprising-turned into a civil war then regional war.

But there is little time for nostalgia, she adds. The situation is tense because Russian airstrikes gave air cover to Syrian troops who advanced on Aleppo, and now the Syrian regime surrounds Zein’s part of the city from the north, west and south and ISIS remains a menace to the east. So it feels like all sides are closing in and with very little access to the Turkish border — Aleppo's lifeline — people are dreading the possibility of a siege.

“We’re very scared, to be honest,” she said, referencing haunting images from the Syrian town of Madaya, where many people have starved to death, including children.

And there is another complication, some international reports claim that the Syrian regime has been violating the cease fire with artillery shelling and airstrikes. During my Skype call with Zein, I could make out the faint sound of shelling in the background.

So people are preparing for the worst. Zein says smugglers are bringing in provisions from Turkey, driving on dangerous roads at night to avoid snipers. Everyone’s stocking up. US-backed rebels are building barricades around the city, recruiting hundreds of men to help with the task, and to protect the supply routes that have been a life line for this part of Aleppo.

“You feel they’re all busy like a bee colony," Zein says. "Some are securing food items, some are working on sand bag barricades, some gathering fuel, some gathering medicine. There are even ordinary families who heard that we’re busy preparing for a possible siege, so they started small projects to plant their own urban vegetable gardens or get some livestock or some chickens,” she said.

But Zein says even the threat of a complete siege won’t compel her to leave Aleppo. She’s been busy, distributing food, clothes and medicine to families all over the city and helping out at the field hospital where her friend is recovering from a shrapnel wound to the leg.

And at the end of the day, before Zein came home to Skype with me, she says she grabbed a shawarma sandwich for dinner from the local shop, and brought it home to eat alone. She still lives by herself, which is unusual for a young woman in today's Syria.

“It doesn’t feel good to be honest," she says. "But I’m always busy, so it doesn’t matter too much,” she said.

When I ask if she’s hopeful that this cease fire might bring the end of the war, she says she’s not so sure.

But at least for now the airstrikes have stopped. And with the fifth anniversary of Syria’s uprising coming up in less than two weeks, she and her fellow activists are planning a major demonstration with flags and balloons.