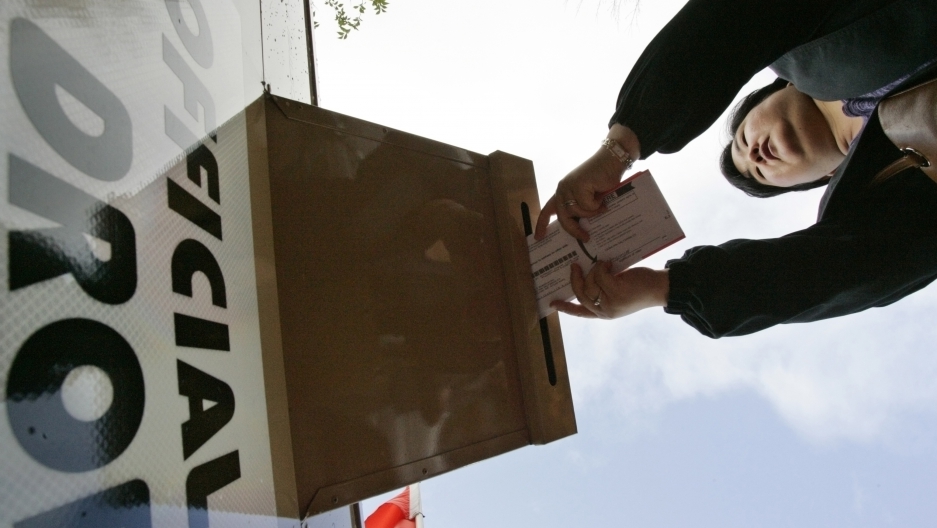 A voter drops off her election ballot at a drop box in Portland, Oregon in 2008. Oregon has vote-by-mail and recently instituted automatic registration through the DMV.

Rekha Koirala is a first-time voter. She was born in Bhutan and grew up in a refugee camp in Nepal. She came the the US in 2008 and became a citizen as soon as she was eligible in 2013.

"I grew up not belonging to anywhere," she says on the phone from Portland. "I was kicked out of my own country."

For her, the process of becoming a citizen and registering to vote was relatively simple. She remembers the volunteers who helped her fill out a registration card after she took her oath of citizenship — and that was that. Come November, like everyone else in Oregon, she will mail in her ballot.

So for advocates and those who want to empower new Americans in the political system, registering new Americans like Koirala is particularly important.

MORE: Every 30 seconds a Latino in the US turns 18. The challenge is getting them to vote.

A 2011 law in Texas began a long debate about the legality of requiring IDs to vote. The Texas law made a short list of acceptable ID — such as a driver's license, concealed handgun license, or military ID — that critics say unfairly penalized minorities, elderly and people in poverty who are much less likely to have these documents. Proponents say they are battling election fraud, not trying to disenfranchise people. The law is currently in effect, but in legal limbo. Last year, Texas passed a law making it free to obtain a Texas birth certificate for anyone who says they want it to get an election ID.

Daniel Meza, of Spring, Texas, registered to vote last summer when he turned 18. The process, he said was not difficult: "You fill out a form — name, address, driver's license number — and you have to sign."

"Naturally, it makes sense you should have to prove you're yourself. But at the same time I understand a lot of people can't get ID," he says.

There are a lot of rules, too. For example, one misconception is that your ID has to match the address where you are registered. This isn't the case, but it still deters people from making the extra effort to make sure they are able to vote.

The process is unnecessarily complicated for people who are trying to learn the system, says Mi Familia Vota executive director Ben Monterroso. "We should welcome people to participate in the democracy of this country, instead of making barriers."

Jonathan Brater, an attorney at the Brennan Center for Justice, represented the NAACP in the case against the Texas law. He says that, in their analysis, Latinos in Texas are 2.5 times more likely to not have the proper identification as white voters and that there are some 600,000 registered voters who do not have photo IDs.

Brater says when states pass laws that create "unnecessary administrative burdens," it makes it difficult for new Americans to participate. "These restrictions really aren't doing anything to protect the integrity of elections," he says. "They're being passed for partisanship."

There are 33 states that require state-approved IDs to vote. Three more have passed laws that are not yet in effect, according to the National Conference of State Legislatures (NCSL).

Back in Oregon, Rev. Joseph Santos-Lyons, executive director of the Asian Pacific American Network of Oregon (APANO), says a new "motor voter" law is bringing down the barriers to new Americans casting their ballots.

"I think we are making some major strides here," says Santos-Lyon.

The law, which went into effect in January, will likely register half of Oregon's 600,000 eligible unregistered voters, including 20,000 Asian American and Pacific Islander voters, he says.

Both California and Oregon have instituted automatic voter registration for anyone who has a driver's license and does not opt out. Legislators in 34 more states and Washington, DC, have introduced bills to do the same in their states since last year.

Another boon for new voters in Oregon has been a partnership between volunteer organizations that help register people and USCIS (US Citizenship and Immigration Services), which runs naturalization ceremonies.

"In the years past, organizations have tried to register voters at the end of the ceremony by tabling outside the ceremonial hall," says Santos-Lyon. But the partnership integrates registration much more closely with citizenship. Right after new Americans take the oath, volunteers talk with them about voting and how to register.

Santos-Lyon says that this program, which began in 2013, has made Oregon the most successful in the region for registering naturalized citizens to vote. About 90 percent of new citizens register to vote, some 4,000 to 5,000 people each year.

In 2012, Texas severely curtailed voter registration drives, restricting them from doing things such as mailing in registration cards or photocopying them.

Meza went through the process of becoming deputized to register voters and work in drives — it involved attending a seminar with a 30- or 45-minute presentation — and found the process to be relatively simple, aside from "the ridiculousness of having to be deputized to register people to vote." Of the presentation he says, "There were a few things that were useful, but you could have looked them up on your cellphone."

The whole process should be much simpler, he says.

These changes in Texas and other states have been possible, in part, because of a big change to a law made to curtail the disenfranchisement of African Americans in the 60s. The Voting Rights Act of 1965 required specific states with histories of denying voters' rights to have federal approval before changing election laws, among other safeguards. A 2013 Supreme Court ruling struck down this part of the law. Spurred by the ruling and largely by Republican legislators, many states have passed new laws about who and how people can vote.

Efforts to require proof of citizenship to register in Kansas, Alabama and Georgia are currently being contested in court.

For advocates in Oregon, there's still room for improvement. Language access — not just Spanish, but Nepali and Somali — is a big concern. Kayse Jama, executive director of the Center for Intercultural Organizing in Portland, is an immigrant from Somalia. He remembers the challenges of voting when he became a citizen.

"My first time voting, my signature was challenged," Jama says. He received an email after the election that his vote was not counted because his signature didn't match the state's record. Had his English not been strong and had he not been well-versed in the process, he has a hard time imagining how he might have made a successful appeal.

Koirala says that the Bhutanese community there depends on each other to translate and explain the system.

"They started coming to me," she says. "Parents couldn't fill out the forms, but the youth who go to school can. There has been this networking going on."

"It's challenging because people don't know much about politics yet. They are busy — working multiple jobs, sending their kids to school," Koirala says. If there was more material in Nepali, that would help.

It's one concern that Koirala and Meza share. He's trying to become a poll worker in November in part because he is bilingual and can help voters who speak Spanish.

"I see it first-hand with my parents," he says. "Many people feel ashamed that they can't speak the language. So they won't bother to vote or even become a citizen."

For now, Koirala is doing what she can to make the most of her new rights. "I feel like I'm included. I feel like those politicians have to respect me if they want to get my vote," she says. "You never are counted when you aren't a citizen."