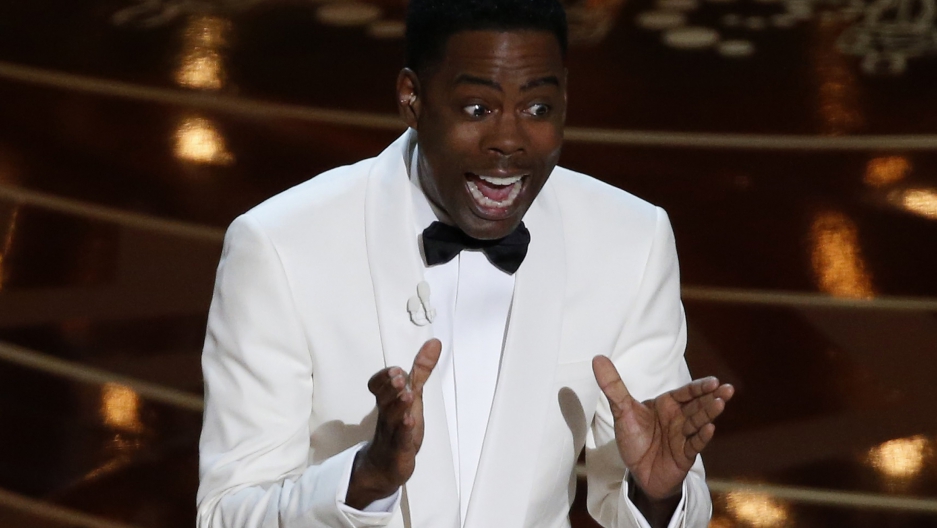 I saw the angry tweets first. There were three cute Asian American kids in tuxedos onstage at the Oscars and people were mad at Chris Rock for being racist.

In this day and age, when many people get their news from social media, our first impressions come from 140 characters on Twitter and Facebook posts littered with emoticons and exclamation points, written by those who are happiest or angriest about any given situation. It's often followed by backlash and a backlash to the backlash. Threats even. Rinse and repeat.

WHAAAAAAAT was that joke with the Asian kids. #Oscars

My first reaction was different, not only because I hadn't seen Chris Rock's joke yet, but because I recognized one of the kids. Last year, I interviewed Estie Kung for her show on the FYI Network called "Man vs. Child: Chef Showdown," which pits child cooks against executive level chefs. Kung is arguably the biggest scene-stealer on the show — she's 8, the youngest of the child chefs by far. In the cast photo, she's more than a head shorter than the rest of the kids.

I reached out to Estie's mother to find out if they wanted to talk about her spot on the Oscars. Her nameless photo was all over the news, but Estie's anonymity probably wouldn't be secure for long.

For the Kungs, this wasn't an easy decision nor was it a publicity stunt. If anyone ever questions how hard it is to come out publicly and speak about racism — whatever you think of Chris Rock's joke — let this be an example.

The overwhelming response was supportive. But even a story about a child and her family comes with intense vitriol and far-flung accusations when it's about racial equity. The family has even received threats in the days since they went public.

Some commenters on Facebook and on PRI.org accused Laura Kung of being a stage parent who paraded Estie around for attention, or worse, as a white mother throwing her biracial Asian kid under the bus because of her disregard for the entire Asian American population. Some oversimplified the story and accused Chris Rock of duping the confused kids. Others said that Asians should be thankful that they are stereotyped as being good at math — better than being stereotyped as a criminal. Some threatened to call child services on the parents.

This is the truth: The Kungs did one interview — this one for PRI's Global Nation — that has been re-purposed online many times, often with clickbait headlines. They don't feel duped by Chris Rock because, even though they didn't know the exact joke ahead of time, they knew what they were getting into. They're not thrilled about the lack of Asian American representation at the Oscars, but they don't blame it on Rock or the Academy. They don't think their situation trumps any injustices being suffered by any other communities. They're just trying to figure out what's best for their kid who loves to perform.

This type of role for minorities, where it's not entirely clear whether it's going to be stereotyping or not, happens often in Hollywood. It's usually not out of malice but because of ignorance. The situation has been dramatized on network television. In the first season of Modern Family, Cam goes behind Mitchell's back to take their adopted Vietnamese American baby to an audition, only to find out he's accidentally signed her up for a racist commercial where white voiceover actors do their best (worst) broken-English accents.

In Master of None, Aziz Ansari and Ravi Patel play Indian American actors who have a very real conversation about why they do or do not go up for roles where they're required to do Indian accents. The episode goes out of the way to show that both perspectives, though conflicting, are equally valid.

On social media and across the Internet, any point of view you take on race in Hollywood will attract vicious haters. But the alternative is silence.

Last year, I did a podcast episode about the relatively few Asian American women creators on YouTube, a medium where anyone with a camera could start their own channel. My hypothesis was that it had to do with societal pressures or perhaps boys' clubs that were unofficial gate-keepers online. After talking to YouTube stars Christine Chen of Wong Fu Productions and actress Anna Akana, it became clear very quickly that cyber-bullying was a big factor.

"I remember breaking down and crying for a minute," Chen says, describing the first time she saw her first barrage of mean comments. "And I'm like, '[I can't believe] I'm in my late 20s, and I'm crying over comments that 12-year-olds are probably writing.' But it's hurtful. It's hurtful stuff, and you have to have a tough skin."

"I've been called a talentless c*nt probably about two dozen times," Akana adds. "I see stuff like that now and I just laugh about it, but it took me three years to get to the point where I honestly don't care about those kind of comments anymore."

It's true that putting yourself out in public comes with consequences for everyone, but when you're a minority, woman, a member of the LGBTQ community — God forbid, all three — you get hate from all sides.

"Being an Asian woman is not as hard as being a Muslim man or an African American man in this country," says Anna Akana, now, in response to people who think critics are overreacting to Chris Rock's Asian joke. "I do not invoke violence from intolerant people. I deal with sexual harassment and objectification and an entirely different set of problems. But when my problems are dismissed as less than someone else's, it becomes a comparison game. People say be thankful you are the 'most sexually sought after race/gender.' Be grateful for the stereotypes you are associated with."

She recently shared a graphic on her Facebook account about the invisibility of Asians in Hollywood, and the response astounded her. 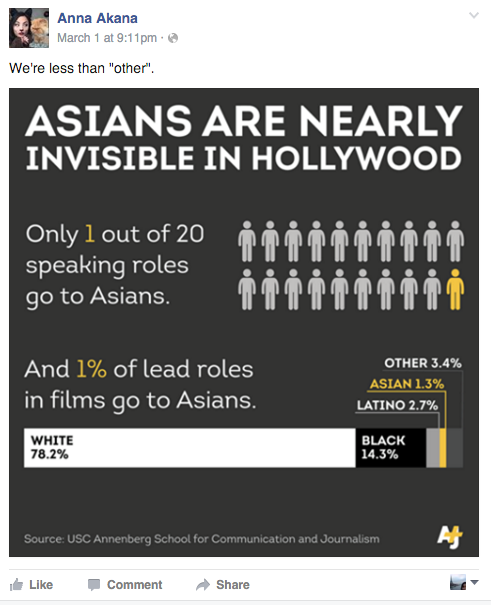 "Asians are only 5% of the US population so of course we see them less in media."

"Don't add to the animosity of black vs whites. Be silent and let our accomplishments speak for themselves."

"The way this issue was dismissed was a wake up call," says Akana. "People didn't think it was a problem, and that it was merely me being angry that I'm not a successful celebrity and blaming it on racism."

"My problem is a first-world problem, and I get that," Akana continues. "But the fact that Asian Americans are invisible is still a problem. The hardest part in speaking up about Asian American racism as a woman is twofold: when you finally get the courage to speak out, you're told to shut up."

It's a bit far-flung to say the Kungs should have anticipated the extent of this controversy based on the premise of a 30-second skit. Any person who's been following Asian Amerians in entertainment will tell you that historically, when Hollywood makes a joke at the expense of Asian Americans, Asian Americans might object — but it rarely goes further than that. To the frustration of activists who have been fighting for better representation for decades, most of the time, no one listens.

But this time, people listened.