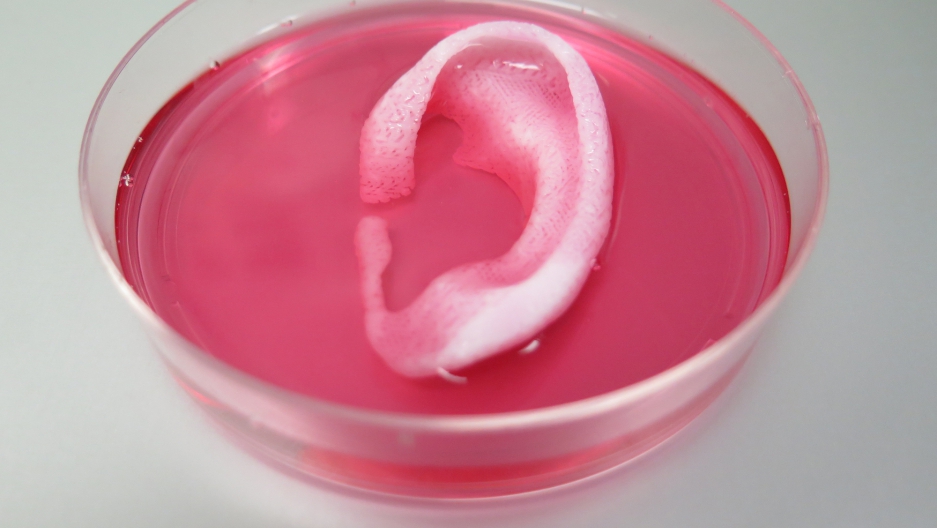 A completed ear structure is printed with the Integrated Tissue-Organ Printing System.

Two years ago, doctors at the University of Michigan were able to 3-D print a trachea for a 16-month-old’s windpipe. That device saved the baby's life. The trachea was made out of hard plastic, but what if we could print body parts that are more true to real life? That were made up of living cells?

Well, this week, scientists reported that they were able to print the first stable ear, bone and muscle structures out of living cells — and then implant them in mice.

The results of the experiment were published in Nature Biotechnology. Anthony Atala, director of the Wake Forest Institute for Regenerative Medicine and an author on that paper, says 3-D printing an organ is vastly more difficult than 3-D printing a plastic prosthetic.

Scientists had been able to print very tiny structures, up to about two millimeters in size, but anything larger meant the nutrients needed to feed tissue in the center of the structures were unable to travel to where they were needed. The perimeter tissue of printed material survived, but the center died.

So what was the key? According to Atala, it was micro-channels.

“What we did is we basically built highways — micro-channels or highways — into the central portion of the structure so the nutrients could get right in,” Atala says.

Once scientists were able to build these micro-channels, their transplanted tissues started taking off. With nutrients traveling along the engineered micro-channels, Atala says, blood vessels from the body started sprouting, like “tentacles, if you will, into the tissue. And it replaces the micro channels with the body’s own blood vessels.”

Another difficulty Atala and his team had to overcome was the actual printing process. They needed to concoct a bio-engineered material that would initially be liquid in form, but then immediately harden into a certain form once it passed through the 3-D printer’s nozzle.

“The moment it hits the surface, you want to make sure it's more like a gelatin,” Atala says, “Because otherwise it'll be just blocks of fluid coming down. So you want it to basically hit the surface as a gelatin and then you want it to harden as a gummy bear.”

To solve this problem, Atala and his team extended the printing process. First they made a hard shell to pour the liquid material into. The shell forms a sort of mold, which then dissolves in water once the printing is completed.

3-D printing ears and bones for mice has been successful, and now Atala and his team are doing pre-clinical studies that will allow them to introduce printed tissues for human patients. Once they complete their safety trials and the regulatory process, they want to start printing more complex bio materials.

“The least complex are flat structures such as skin — they're flat, mostly one major cell type,” Atala says. “Tubular structures are the second level complexity like blood vessels ... hollow non-tubular organs are the third level of complexity, like the stomach with a bladder. The architecture is more complex, more interaction with other organs. Finally, the most complex are the solid organs like the liver, the heart, the lung. We're going to follow that same path in terms of least complex to most complex.”