A kid learns in the womb. It took a study and an Australian soap opera to begin to figure it out.

A British psychologist published a study showing that pregnant moms who watched the 1980s show “Neighbours” every day gave birth to babies who reacted more strongly to the show’s theme song than those whose moms did not watch the show.

“That is the first paper which has shown that fetuses can be exposed to specific types of sounds and then elicit some sort of reaction to them after they have been born,” says Eino Partanen, a Finnish neuroscientist at Aarhus University Hospital in Denmark.

Partanen was not involved in the soap opera study, but it has inspired a lot of his work, including something he and his colleagues tried a few years ago while in Finland. They took a group of pregnant moms and for 15 minutes each day, 5 days each week, during their last trimester, he asked them to play a recording.

One of the babies taking part in a language acquistion test at the University of Helsinki, Finland.

Occasionally in the recording, the middle syllable of the “tatata” sequence was swapped out for a different vowel (“tatota”) or a different pitch.

Then, just days after they were born, Partanen played the stimuli to the newborns and used an EEG to monitor their brain activity. He compared it to a group of newborns who did not receive the in utero “tatata” stimulation.

Both groups of babies responded identically to the sequence with the different vowel because that second vowel is heard all the time in Finnish. You do not need a special recording to be exposed to it as a fetus.

But only the babies who had been exposed in utero to the pitch change recognize it once they are born. And that is because, just as in English, pitch is not relevant in Finnish. That contrasts with some languages (Chinese, for example) where words take on different meanings based on pitch. So babies that do not hear different pitches in utero do not respond to them later. More simply, babies respond to the signals they first hear in utero. And of course, these signals can come from one language or many languages.

“The way I think of the early development is the fetal stage builds up specific predispositions to what we’re going to experience later on after we’ve been born,” says Partanen. “Babies are not born as a blank slate.”

Rather, a kind of groundwork gets laid in utero that familiarizes us with the world that we are about to encounter. And if that world has more than one language, we also prep for that in utero.

“A lot of language crosses the uterine wall,” says Janet Werker, a developmental psychologist at the University of British Columbia, “and so by the time the baby is born, they’re not an inexperienced listener.”

Werker is based in Vancouver, a multilingual city. “We have babies growing up in all sorts of combinations of languages,” she says.

That includes bilingual homes where English and Filipino are spoken — two languages with different spoken rhythms.

Werker wanted to know whether babies exposed in utero to English and Filipino are familiar with both languages at birth, and whether they can differentiate between them. She and her colleagues worked with newborns several hours to several days old. It’s a tricky population.

So she wired a pressure sensor up to a pacifier.

She says, “Babies will change their rate of sucking, their strength of sucking, and you can condition the sucking reflex.” 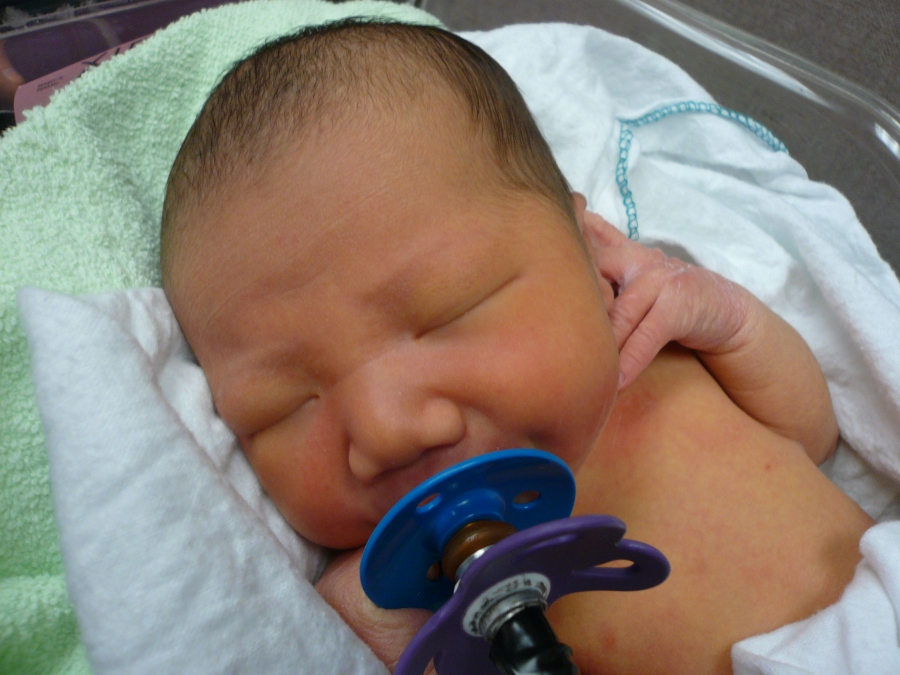 This means that how much a baby sucks or how strongly that baby sucks can tell you how familiar and interesting something is to the baby, including the muffled speech samples that Werker played, filtered to sound like they would in the womb.

The results were clear. “From the moment a newborn baby is born who’s growing up in a bilingual environment, they listen preferentially to speakers of either of the languages they heard in utero,” Werker says. “And they’re able to track the rhythmical properties of each. So they’re born ready to learn two languages and not confuse them.”

Werker says all this learning before birth might be useful. First, it may allow babies to identify who is part of their community once they’re born. And second, just from rhythm cues, babies may be able to track how certain words function — and give them a head start on learning that language. All this might come in handy when considering early interventions for things like dyslexia. These are still hypotheses. So Werker appreciates a more concrete, and intimate, lesson. It’s one she has learned by watching the parents watching their babies in an experiment like this.

There's more on this, as well as some other stories about language acquisition and bilingualism, in the latest World in Words podcast.