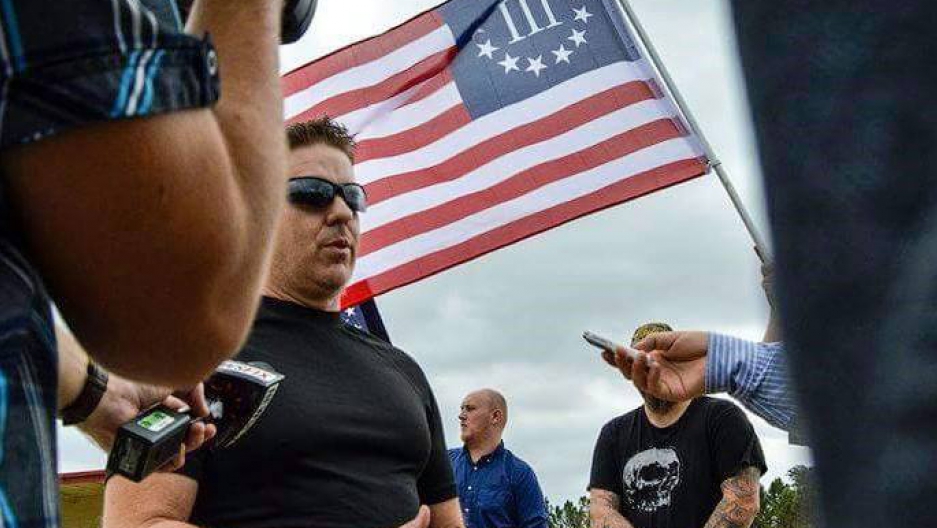 David Wright talks to the media in Richardson, Texas in December of 2015.

David Wright has made a name for himself by protesting outside of mosques in the Dallas area while carrying a 12-gauge shotgun.

He is opposed to the US accepting any refugees from Syria, Iraq or Afghanistan. The group he heads, the Bureau of American Islamic Relations, started armed protests targeting Muslim organizations last October, and has since been labeled an anti-Muslim hate group by The Southern Poverty Law Center.

He's also an avid Facebook user, regularly posting politically charged status updates like, “We will use ALL LEGAL means necessary to fight against Islamic extremists that threaten our communities,” and "Under Obama, Islamic Terrorism and Government Tyranny have joined forces."

In our current political climate, one might assume that Wright would support Donald Trump, as Trump has taken the hardest line against Syrian refugees and immigrants. But Wright voted for Senator Ted Cruz, and not just because he’s from Texas. Even for Wright, Trump’s anti-Muslim positions and rhetoric have gone too far.

“For me and for my group, and for most of the people that we associate with, we’re not Trump fans,” he says. “The majority of us aren’t.”

What about Trump exactly does he object to? For one, he cites the real estate tycoon’s plan to temporarily ban all Muslims from traveling to the US.

“It’s inefficient, ineffective, and it opens the door for him to be labeled a racist and a bigot and it takes the spotlight off the actual concern, which is our safety and security. I don’t want someone like that running my country,” he says.

You don’t have to scan very far down BAIR’s Facebook comments or Twitter to find instances of Wright and his group being called racists and bigots themselves. It’s a charge he’s familiar with. But would he call Trump a racist?

“I don’t know him, so I can’t really say that. I can say that some of the things he says lead you to believe that, some of his actions have lead me to believe that.”

In that regard, Wright cites Trump’s initial delay in disavowing a quasi-endorsement of white nationalist and former KKK Grandmaster David Duke.

“If I were Trump, I would have denounced David Duke and the KKK within 30 seconds, and he didn’t. To me, that’s a problem,” Wright says. “I know why he did it. He has been getting the racist vote in every state so far, and he knows he’s got the racist vote. He doesn’t care that they’re racist. He just wants their votes.”

ALSO: 'Hitler without the mustache.' Why — and how — a white nationalist group is backing Trump.

Wright says his main concern is with the resettlement of refugees from war zones. He repeats a common refrain in Facebook posts opposed to refugee resettlement: Government should do more to help veterans instead. But Wright says he’s not concerned about travelers or immigrants from Muslim countries in general. When asked whether Muslim tourists from Dubai should be able to enter the country, for instance, he responded favorably.

“I mean, why not? We’ve always been a nation of immigrants. Even if a Muslim man from Dubai wanted to come and stay here permanently, I don’t have a problem with that. If he’s a business owner and he’s going to create jobs, that’s fine. Come here, create jobs here, hire our people. I welcome that, all day long, every day. That will make America better. We need jobs.”

Wright, a contractor by trade, is a controversial figure in his own right, and not just for the armed protests. In November, he published a list with the home addresses of “Muslims and Muslim sympathizers” on his Facebook page. The information came from a public document that listed the people who spoke at a city council meeting against a proposal to endorse a state bill, “emphasising the already enshrined primacy of domestic laws above foreign laws,” as the Guardian reported.

Many saw Wright’s posting as an act of intimidation, and Facebook took it down. One local activist likened it to putting a “bullseye on the back of all the people that stood up against the so-called anti-Sharia law bill.”  Wright maintains that he posted the list to show that the meeting had taken place, a fact he said a local reporter had disputed. The meeting was widely covered by local and national press.  What was in dispute was why the vote was held in the first place. Wright supports Irving Mayor Beth Van Duyne's claim that it was in response to a local mosque developing its own sharia court, while the mosque leaders said the tribunal in question only offered non-binding conflict resolution, and did not supersede any local laws.

Wright says he does not condone violence, and that BAIR members only brings guns to their events for self defense. He does worry about some of the other armed militia members who show up at BAIR events.

“I’m also concerned with people from my side of things being crazy, too. There are a lot of guys in the militia-type movement that aren’t right in their head. Some of them, I don’t trust them,” he says.

However, Ibrahim Hooper, spokesman for the Council for American Islamic Relations (whose name BAIR plays off of), believes BAIR brings gun to protests to send a message.

“Any time you force worshippers to walk through a cordon of armed men, that’s an act of intimidation in and of itself. That sends a message that as a religious minority they are not welcome and that they don’t have the same freedom to practice their faith that every other American does," Hooper says.

“The fact that you have an anti-Muslim hate group saying a candidate has gone too far really tells you where we are in this presidential election,” he added.

The Southern Povery Law Center had a similar response.

“While it’s very nice that the Bureau of American Islamic Relations believes that Donald Trump has gone too far in his attacks on Muslims, the reality is that the group is really no better,” says Mark Potok, senior fellow at the SPLC. “When you parade around in front of mosques while carrying heavy weapons, it’s perfectly clear that your aim is to intimidate and demonize anyone whose faith is Islam, just as Trump has done.”