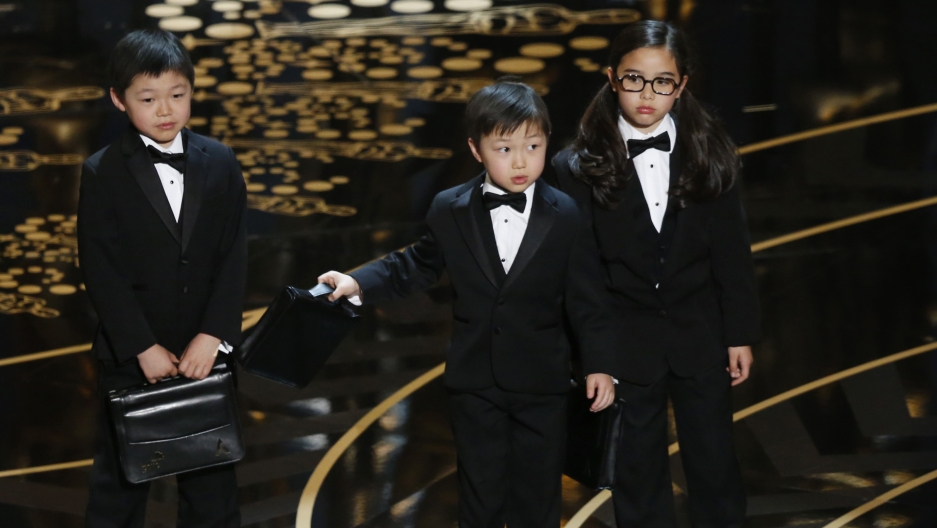 Eight-year-old Estie Kung, right, was one of the actors cast as "accountants from PricewaterhouseCoopers" to take the stage at the 88th Academy Awards on Sunday. Neither she nor her mother knew that the three were going to become the butt of a joke about Asians, though.

In January, 8-year-old Estie Kung went to four countries in two weeks to promote "Man vs. Child: Chef Showdown." The show pits a cast of five child cooks against adult executive-level chefs in a culinary battle.

It premiered in the US on the FYI Network last summer, but when Lifetime Asia began to air the show this year, they sent the biracial Kung (her mother is white, her father is Chinese American) on a press tour to Hong Kong, Singapore, Malaysia and the Philippines.

It was her first time in Asia, and she was so popular abroad that one Malaysian fan who didn't own a car asked her nephews to drive her six hours to Kuala Lumpur just for the chance to see the oft-pigtailed third grader at a mall and give her a gift. She did over 50 interviews and saw advertisements for the show on the sides of buses. ("My face was huge!")

A little over a month later, back at home in Los Angeles, the second season of "Man Vs. Child" is scheduled to return this month. But now, photographs of Kung alongside two other Asian American child actors onstage at the Oscars have been plastered all over the news.

In the Academy Awards broadcast on Feb. 28, host Chris Rock did a skit where he introduced the “dedicated, accurate and hard-working” accountants “Ming Zhu, Bao Ling and David Moskowitz” responsible for counting the votes for the night. He then welcomed the three tuxedo-clad kids, Kung included, holding briefcases: a play on the stereotype of Asian (and Jewish) Americans being model minorities who are good at math.

To add insult to injury, Rock threw in a child labor reference: "If anybody is upset about this joke, just tweet about it on your phone, which was also made by these kids."

UPDATE: On Monday, the Academy of Motion Pictures Arts and Sciences apologized for the slurs, after Asian and Asian American members, including actor George Takei and director Ang Lee, sent a letter calling for redress.

“The Academy appreciates the concerns stated, and regrets that any aspect of the Oscar telecast was offensive,” an Academy spokesperson told the Hollywood Reporter. “We are committed to doing our best to ensure that material in future shows be more culturally sensitive.”

There has been no word from Chris Rock.

Turns out, it doesn't matter how big you may be in Asia; the roles that mainstream Hollywood writes for minorities are still limited. According to a report by the Media, Diversity and Social Change Initiative at the University of Southern California's Annenberg School for Communication and Journalism, only 1.3 percent of leading roles go to Asian Americans and over half of Hollywood projects don't even feature a speaking or named Asian American character.

It's no wonder many big name Asian actors like Tony Leung, Shah Rukh Khan and Takeshi Kaneshiro show very little interest when asked about crossing over to Hollywood. Why would they want to play a supporting character in a comic book movie who dies in the first act, when they greenlight major motion pictures and are able to play a full range of three-dimensional characters in Asia?

The landscape is changing — with starring TV roles for Priyanka Chopra in "Quantico" and Daniel Wu in "Into the Badlands," who have both been stars abroad for over a decade — but not quickly enough.

Estie's mother, Laura Kung, says they were only told about the joke's premise at the audition. She says they were told that when Rock first hosted the Oscars in 2005, he'd introduced "the accountants" in a similar fashion before bringing out two 8-foot-tall African American men. This time around, he wanted to do a reprise of the joke using three Asian American children.

"I did wonder, 'Why all Asians?'" says Laura Kung. "But I assumed there was a bigger picture, a more complex joke given all the emphasis placed on diversity at the Oscars this year."

More: However you feel about Chris Rock's Asian joke, it takes guts to talk openly about race

The audition was short. They asked Estie if she got stagefright (no) and if she could do a serious face (yes), and that was it. She booked the gig.

Laura has been taking her daughter on auditions for three years, and they've been lucky that Estie has never been asked to do a stereotypical Asian role. Last fall, Kung made a charming debut on The Late Late Show, where she taught host James Corden how to make a deviled egg with lobster and advised him that it might be hard to get a table at Chef Ludo Lefebvre's restaurant because it is really expensive.

"Going into every audition or job, I always try to determine the production's motivation in seeing Asian talent," she says. "Often, they are looking at all kids and her race is irrelevant. Other times, I do feel like they need to have a whole 'rainbow' of talent, which is fine, but feels more contrived. Estie's been cast with a mixture of Asian and white parents, and it's really an interesting part of the process." 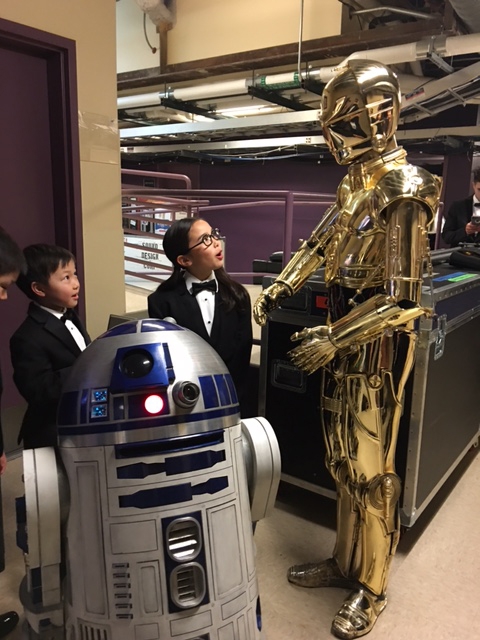 Estie Kung, 8, meets droids of Star Wars backstage at the Oscars.
Credit: Courtesy of Laura Kung
"I love getting credentials," Estie says of her Oscars gig. She's equally excited about their free parking space, the Oscars baseball cap she got as swag and seeing the Star Wars droids backstage.

In this case, it wasn't until the rehearsals, after Estie got her tux fitted and was already looking forward to the opportunity to be on the Oscars, that her parents heard the entirety of the joke for the first time. But they had already signed the contract and had to confront the very likely possibility that their daughter would be part of a racist joke that would cause an uproar. After talking to Estie, they ultimately decided to take the optimistic point of view, believing that an inappropriate Asian joke that might provoke a difficult public conversation may be preferable if the status-quo alternative was to have no Asian presence at all. So, they braced themselves.

ALSO: Despite history, Japanese Americans and African Americans are working together to claim their rights

The bit only lasted 30 seconds, but if you look closely, one of the boys misses his mark, and the other boy (his real-life brother) cracks a smile at his sibling's multiple failed attempts to get back to the correct spot. The confusion is adorable, but Estie manages to successfully stay in character.

By the time they made it back to the dressing room, Estie's older sister had already texted them a screenshot of the flurry of angry Twitter reactions that were starting to pop up. She was so upset on behalf of her little sister that she was shaking.

"This was not okay and should never have happened," says Laura Kung. "But the angrier people are and more people talk about it, the better it will be moving forward. Estie hopes to keep acting and we all hope for a time when she can be on that stage to honor her achievement."

The joke stung harder than it might have in years past, precisely because the trending hashtag #OscarsSoWhite, which emerged because it was the second year in a row where all the acting nominees were white, forced Rock and the Hollywood elite to confront their biases. Prior to the ceremony, celebrities including Spike Lee, Will Smith and Jada Pinkett Smith boycotted the awards show. Directors Ava DuVernay and Ryan Coogler chose to hold #JusticeForFlint, a fundraiser for the Flint water crisis, on the same night. Academy president Cheryl Boone Isaacs announced its goal to double its diverse members by 2020.

So when Asians still seemed to be the butt of the joke — it didn't help that presenter Sacha Baron Cohen would later make a joke about "hard-working little yellow people with tiny dongs" — even celebrities like Constance Wu, Daniel Dae Kim and Jeremy Lin weighed in on Twitter.

To parade little kids on stage w/no speaking lines merely to be the butt of a racist joke is reductive & gross. Antithesis of progress.

Seriously though, when is this going to change?!? Tired of it being "cool" and "ok" to bash Asians smh #Oscars https://t.co/1nBvAd3V0q

"It's hard seeing pictures of your daughter's very serious face on stage associated with all of this," says Laura Kung. "It's definitely been a damper to all the joy she felt just being there."

Estie, though, is taking it all in stride. She isn't familiar with Rock's comedy ("I've never seen 'Madagascar,'" she says) and she didn't initially understand the child labor joke until her mother explained it to her. (She thought Rock was saying that they designed the phones.) And even now, when she's asked if she thinks the joke is funny, she just shrugs and says, "Kind of, kind of not."

To the young professional entertainer, the Oscars were just another job, and as far as she's concerned, her job is done. 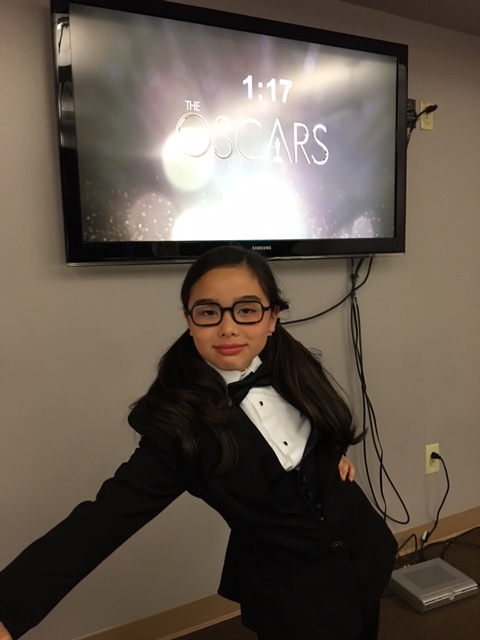 8-year-old Estie Kung was excited to be part of the Oscars. Here she is backstage.