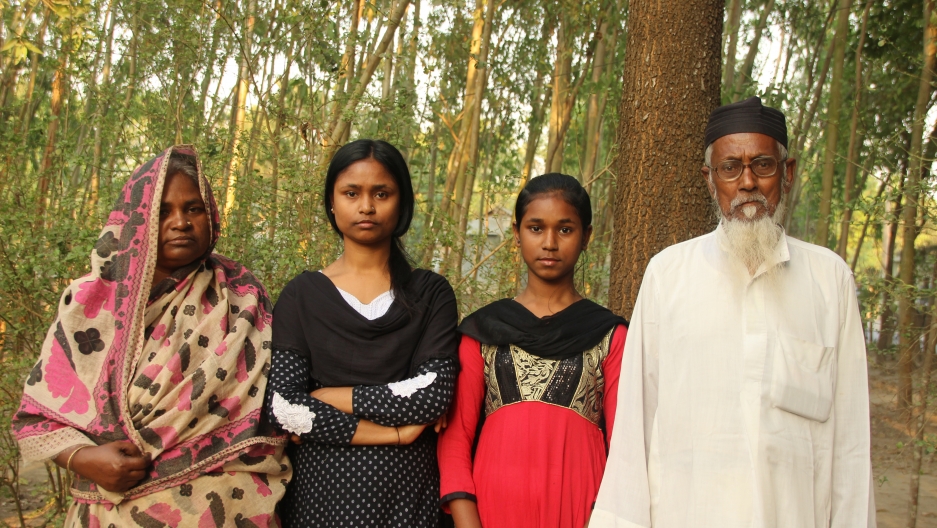 The garment industry has been under scrutiny in Bangladesh since a factory complex, Rana Plaza, collapsed and killed more than 1,000 workers nearly three years ago. But there’s a lesser-known story alongside the news of unsafe or harsh working conditions in Bangladesh: jobs for women.

They make up 80 percent of the Bangladeshi garment workforce. Much of the money women make goes back to villages in the countryside, like Dhanbari, which isn’t that far from Bangladesh’s capital, Dhaka. But it’s a slog to get there on the country’s clogged and chaotic roads.

Sabina, a garment worker, grew up in Dhanbari. She just goes by one name, a common practice in Bangladesh.

Her family’s home is in a cluster of corrugated-tin buildings. When Sabina was a girl, the houses had clay walls and roofs of thatched leaves, she says.

She was married off when she was 14, but two years later her husband disappeared. At that point, she was left to support both a newborn daughter and aging parents.

Maliha, Sabina's mother, says that often the family would only have rice to eat — and sometimes they couldn't even afford that.

An aunt who worked in a Dhaka clothing factory said she could find Sabina a job. So in 2003, Sabina moved to the city. 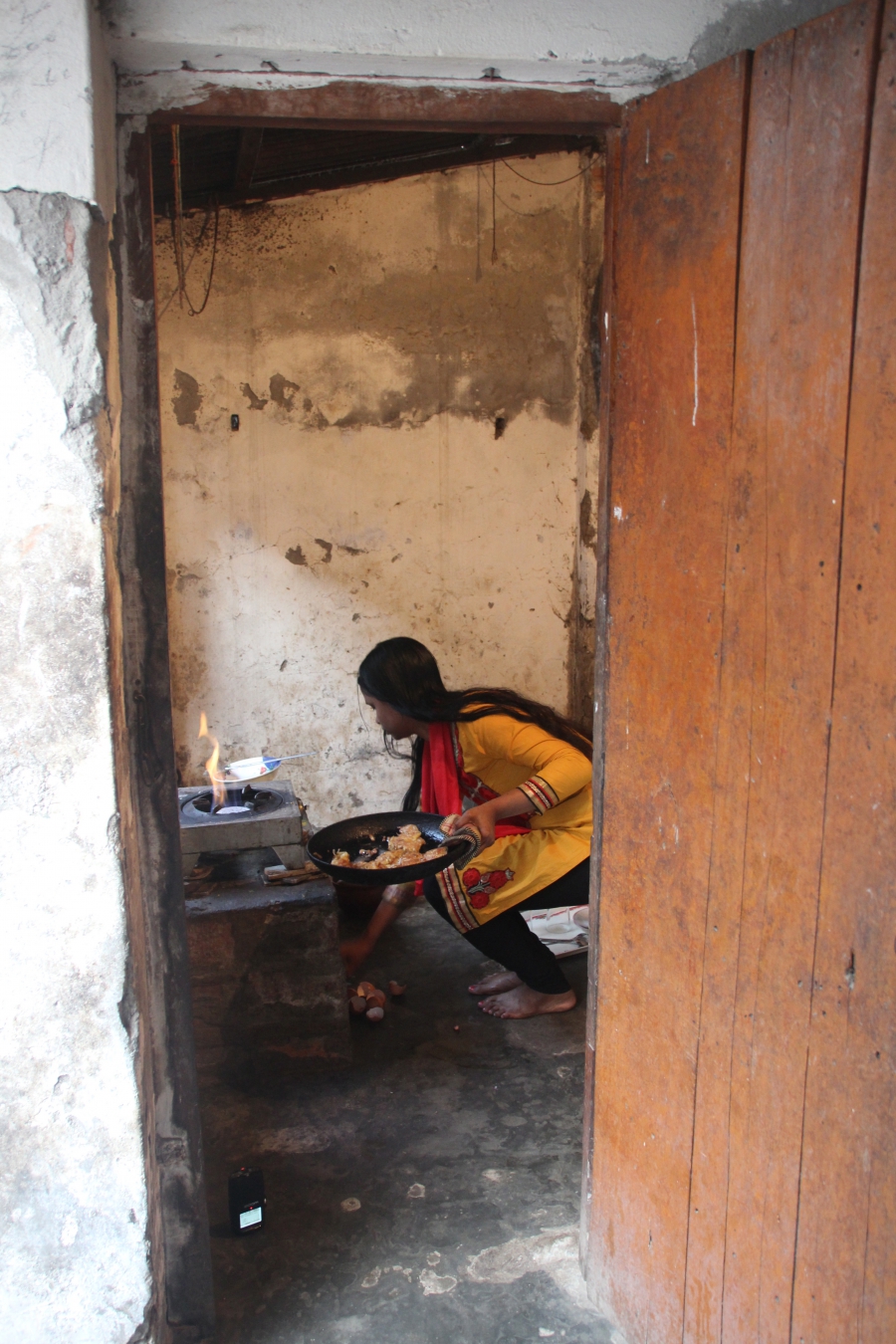 Most mornings, Sabina cooks breakfast over a single burner in a room next to her room in Dhaka.

'I have to get up and go to work again'

“It was hard,” Sabina says. “In the village, I was used to walking freely. At the job I was sitting for hours at the workbench, my feet were swelling. I was upset all the time.”

It was hard on her parents, too. They didn't have a phone back then, so they were out of touch.

But at least Sabina was sending them money to live. Sabina says she earned around 12,000 taka a month, about $150, and sent half of it back to her family. Her daughter, who's 13 now, stayed in the village with Sabina’s parents.

Another third of Sabina’s salary goes to rent a bed in a small cinder-block room. Most mornings, she wakes up early and makes breakfast for her two roommates, as well as the three guys in the room next door.

Early one morning, she was frying eggs over a single burner in a makeshift kitchen. She’d worked until 10:30 the night before on an order for Target, checking for defects and making sure the garment colors were right. She’s expected to get through 400 pieces of clothing an hour. Working until 2 a.m. is not uncommon if there’s a shipping deadline.

“Some weeks it seems like I don’t get any rest at all," she said. "It seems like I have just lain down when I have to get up and go to work again.”

It’s a grind, but sometimes she has fun with her co-workers. They joke about how no woman in Bangladesh could be seen in the skimpy top they’re manufacturing, or hold up a large jacket and laugh about how their whole family could fit in it. 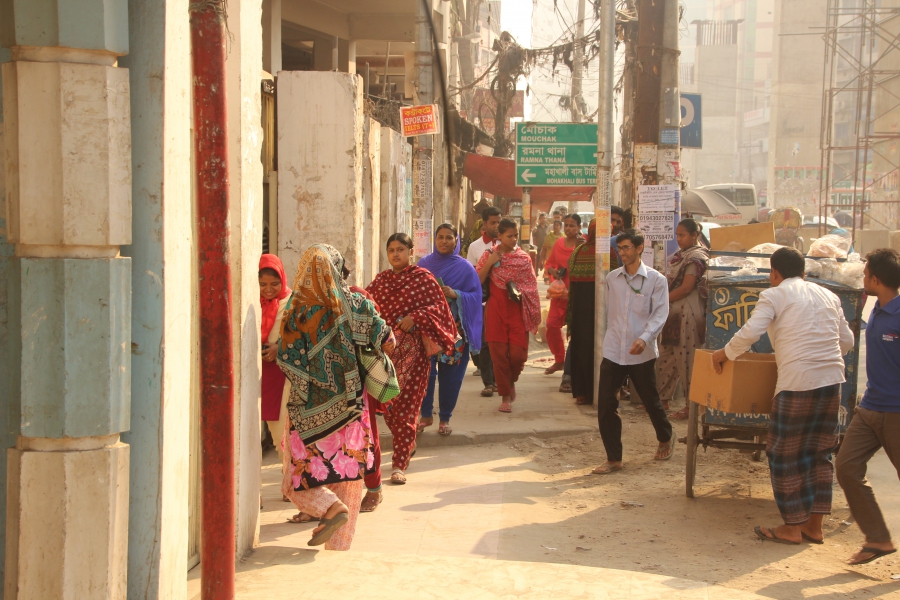 The morning rush hour in Dhaka includes thousands of workers on their way to their shifts in garment factories.

But even that small amount of fun ended for Sabina a few months later.

Recently, she was fired from her job at the factory, along with scores of her coworkers. She says it was because her bosses found out they were trying to build a union. Managers at other factories refused to hire her. They thought she was a troublemaker.

After two months of searching, she found a job in a factory in an industrial area outside of Dhaka. The job doesn’t pay as well as her old one, and she’s worried she won’t be able to keep up with her daughter’s school fees.

Back in Dhanbari, Sabina's father and uncle talked about how things have changed since villagers started working in factories. There are those tin roofs, plus their homes have electricity, phones and TVs.

There’s still an active mosque and madrassa on the grounds of a British colonial property — the sound of students reciting the Quran fly over a wall.

On a recent visit, Sabina stopped and talked to the local imam. He recited a verse in a low whisper, and blows on her closed eyelids. They were quiet for a moment. Then Sabina rejoined us.

“I’ve been having nightmares recently, and I thought if I was blessed, the nightmares would go away,” she said. 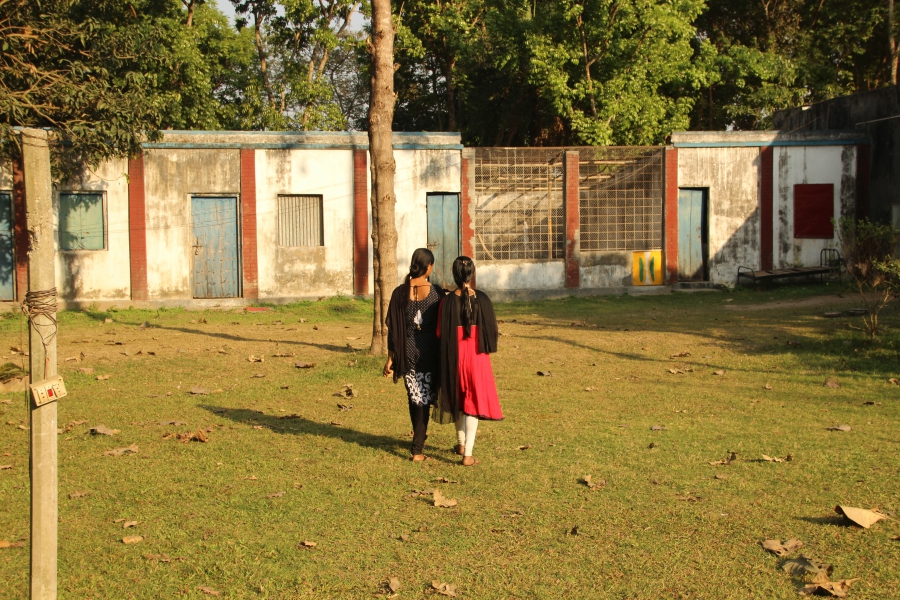 Sabina and her daughter on a walk in their village, Dhanbari.