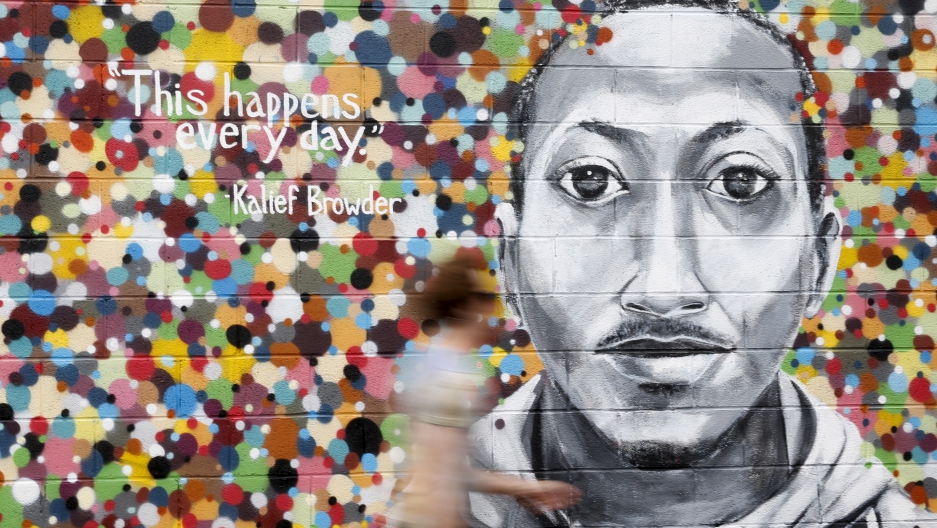 A mural honoring Kalief Browder in Queens, New York. As a teenager, Browder was held at New York City's troubled Rikers Island prison complex for three years without being convicted of a crime. He committed suicide in 2015.

Last week, the Kansas State Senate passed a bill to revamp its juvenile justice system. The state has one of the highest rates of youth incarceration in the nation. Pushed by local juvenile justice reformers, the bill would close juvenile offender group homes, standardize the sentencing of juveniles, and provide $2 million for alternatives to detention such as therapeutic counseling.

The move follows an executive order issued from President Barack Obama that bans the use of solitary confinement for juveniles in federal prisons. That same day, the US Supreme Court issued a ruling affecting mandatory life sentences for inmates convicted as juveniles. While both are limited in scope — there are only 26 juveniles in federal prison, for example — advocates are hopeful for the future.

“The president’s decision was an enormous display of moral leadership,” says Amy Fettig, senior staff counsel at the ACLU. “Having the federal government, which is the largest incarcerator in the nation, no longer practice solitary confinement will set a precedent and force other states around the country to re-evaluate the practice.”

Solitary confinement, called modern-day torture by its critics, is the practice of isolating a juvenile for between 22 and 24 hours a day. It's currently permitted in 24 states.

Alton Pitre, 24, a junior at Morehouse College, serves on the board of the Anti-Recidivism Coalition, a nonprofit advocating for criminal justice reform. He was charged with robbery at the age of 16 and placed in Los Angeles County’s Central Juvenile Hall for more than a year. Labeled a high-risk offender, he was placed in solitary confinement several times. His case was eventually dismissed, and he was freed. He has since dedicated his life to eliminating a practice that still haunts him.

“They take away your reading and writing materials when you’re at your most vulnerable point in life. When your mind is still expanding. I still don’t like being alone,” he says.

He describes a difficult readjustment period post-prison. The urge to fight anyone who came too close to him on the street was constant, as was the fear of being alone in a room.

According to Solitary Watch, a website that tracks data on solitary confinement, incarcerated youth who have endured the practice are 16 times more likely to either harm themselves or commit suicide than those who have not. The US Office of Juvenile Justice notes that 60 percent of all juvenile inmate suicides are committed by those who either are or have been in solitary confinement.

Pitre says his ordeal is just one example of the residual damage solitary confinement can do to the lives of juveniles. Recently, juvenile justice advocates have highlighted the case of Kalief Browder of New York. The 16-year-old, accused in 2010 of stealing a backpack , was imprisoned without trial for three years, two of which were in solitary confinement. He had difficulty adjusting to life after his release and committed suicide in 2015.

Obama highlighted the dangers the practice poses to youth in a column he authored for The Washington Post prior to announcing the ban:

“How can we subject prisoners to unnecessary solitary confinement, knowing its effects, and then expect them to return to our communities as whole people? It doesn’t make us safer. It’s an affront to our common humanity,” he wrote.

For Pitre, the president is merely repeating words he himself has spoken since his release from prison in 2013. The journalism and sociology major has crisscrossed the country to speak out on the need for juvenile prison reform.

Fettig says that while most of the focus has been on the president and the Supreme Court, their recent actions would most likely have not happened without the lobbying efforts of families of imprisoned youth, civil rights groups and formerly incarcerated youth.

The announced reforms also come on the heels of renewed scrutiny after a recent ProPublica report revealed rampant abuse suffered by many young inmates at the hands of prison guards.

The Supreme Court’s decision in Montgomery v. Louisiana has been met with tempered enthusiasm. The ruling says that a sentence of life without parole given to an inmate as an adolescent must only be reviewed, not that it will be overturned. Fourteen states already made these sentences subject to re-evaluation prior to the decision.

“America is the only developed country in the world that sentences its children to die in prison,” says Jody Kent Levy, national coordinator for The Campaign for the Fair Sentencing of Youth.

Levy says the United States is finally reassessing the theory of juvenile “superpredators.” The belief, popularized in the 1990s by political scientist John J. DiIulio Jr, is that some juveniles are prone to violence, therefore harsh punishment is necessary.

However, research has discredited the theory and strengthened the argument that children, whose brains are still developing, are different from adult prisoners and should be treated accordingly.

Despite the hurdles that remain, many advocates continue to fight for reform. Pitre has joined other reform advocates in lobbying Congress to pass the Youth Promise Act.

He met with staffers of Rep. Susan Davis about the bill, which, among other things, calls for establishing a National Research Center for Proven Juvenile Justice Practices and funding for community-sponsored intervention programs to prevent juvenile delinquency. The bill also will provide funds for communities to hire and train youth-oriented police officers, and is one of the few pieces of legislation to cut across the political spectrum, with both Republicans and Democrats supporting it.

To make his case for the bill, Pitre recounted his life story to Davis’ staff.

Born to an incarcerated single mother, Pitre was raised by his grandmother in South Central Los Angeles. The tug of gang life proved too strong, eventually landing him in jail. Stuffed in what he calls a “prison inside a prison,” rage at the world festered inside him. He told them the only thing that saved him was his belief in God, and the fact that someone else instilled a sense of purpose in his life.

The Youth Promise Act has become a focal point for reformers nationally. Davis is one of the bill’s 129 sponsors, and awaits a full house vote as it currently sits in the House Committee on Education and the Workforce.

Building on victories at the local and national level remains a challenge, Pitre says. The transformation of America’s juvenile justice system may be daunting, but Pitre points to his own life’s conversion as proof of what can be accomplished with enough determination.