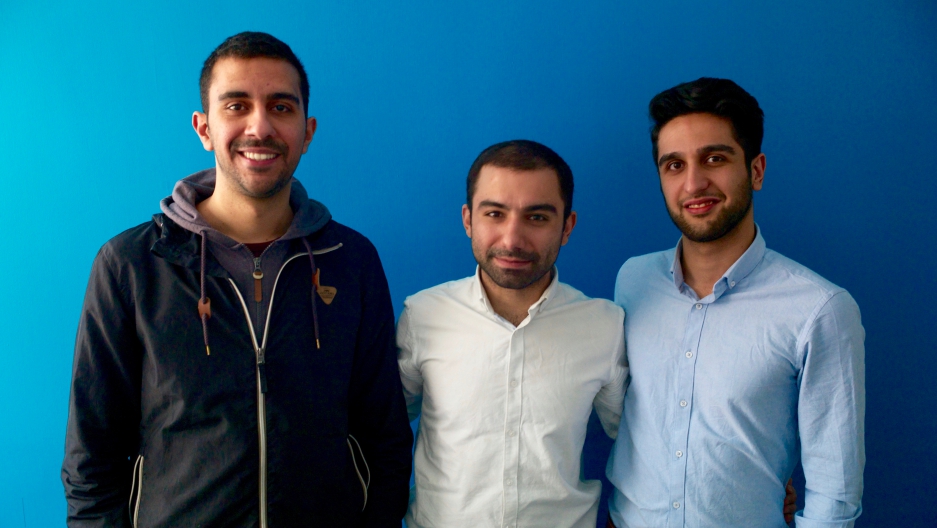 Hamed Jafari, Mohammadreza Azali and Alireza Jozi (left to right) are the founders of the Tehran startup TechRasa.

For 25-year-old Hamed Jafari, the morning commute involves two taxis and one bus ride from the northeast outskirts of Tehran into the hottest business district downtown.

Hamed is one of the co-founders, along with two other guys, of TechRasa.

“Basically, we’re writers, we’re community builders,” he explained from the backseat of a taxi on his way to work one morning last month.

Hamed says Iranians living abroad get in touch all the time – especially since the sanctions started to be lifted. They ask about work opportunities in Tehran. Hamed tells them they should come see for themselves and to prepare to be surprised.

He is kind of a bridge himself. Hamed lived in Ottawa for three years before coming back to this city, where he was born and where his family lives.

“I’m a religious guy. I consider myself a religious person. I pray five times a day. That’s surprising for even some Iranian people when I tell them, because I speak English, I’m working with foreigners. But you know, it’s normal for me,” he says.

TechRasa was born at a university incubator. It just moved into a new office space that still smelled like fresh paint and plaster when Hamed showed us around.

Mohammadreza Azali is one of the co-founders. At 28, he is the old man of the team.

“Eight months ago, we quit our jobs to start this thing. We had so much trouble,” Azali says.

That’s because for Iranian web companies, it’s tough to bring in much revenue from online advertisements, Azali explains. “We have many websites that have tons, millions of visitors per day, and we can’t make that kind of money.”

Azali says the company pulled through — and has exceeded expectations — because of one thing. “It was only love, because we love what we are doing,” he says.

But the love is starting to pay off.

Alireza Jozi is the third co-founder. He’s 23. And he says they do write articles about the startup scene in Iran. But what brings in the money are the services they offer, like marketing and public relations.

“We also provide consultancy to companies, startup companies, that want to enter Iran. That was our major revenue source until now. And we never raised funds. We never got investment or anything, just to have our independence. So, these bootstrapping methods really came in handy to maintain ourselves,” he says.

Alireza says startups in Iran face the same kinds of challenges they do anywhere else in the world. They have to finding talent and attracting smart funding. But the are unique issues faced by Iranian startups too.

The thing that seems to irk the TechRasa guys most is their inability to travel internationally with much ease. As Iranian passport holders, that means they cannot just jump on a plane without a visa and fly to most countries on earth, which means it’s hard to attend conferences or meet with potential business partners abroad.

Then there’s the fact that dual nationals in Iran have occasionally found themselves targeted by the Iranian regime. We asked about the case of Iranian-American businessman Siamak Namazi, who was detained back in October.

“I don’t know what he did,” Hamed says.  “We’re not political people.”

“We’re not doing anything illegal here. We’re trying to promote Iran’s startup ecosystem to the world. So, I don’t think that will be a problem for us. …Actually, the new government is helping the startup movement that is happening in Iran,” he adds.

Hamed says he’s read stuff in hardline Iranian newspapers about the Tehran startup scene being a security threat, because it’s allegedly a way for western countries to steal from Iran.

But the truth is, Hamed says it’s the folks from Iran’s newbie startup scene who are the ones borrowing ideas from the west, not vice versa.