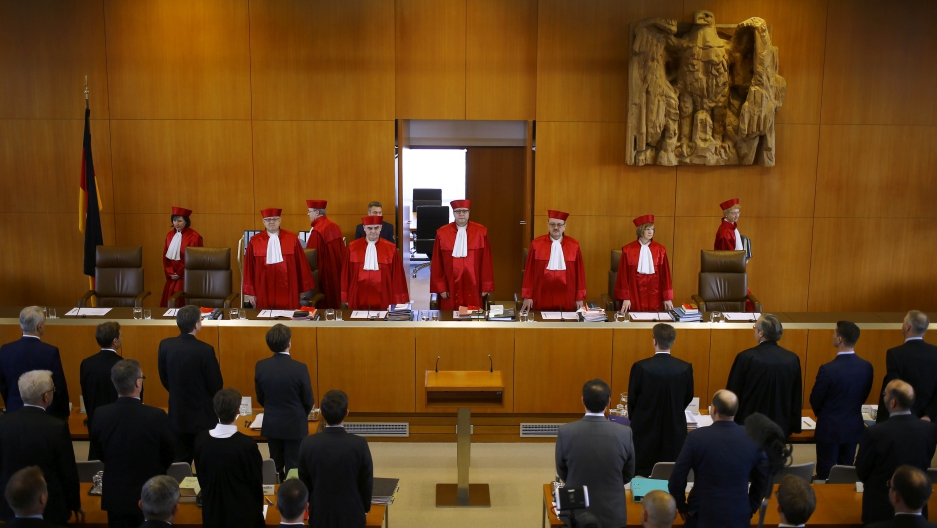 Germany's highest court assembles to hear the case on whether to ban the far-right NPD.

If there's one country on the planet that's anxious about protecting democracy and justice for its minorities, it's Germany.

Germany's history with the Nazis and then the communists in the east has produced a legacy of incredibly strong protections for liberty.

So it's hard for them to ban a political party, even a far-right party that's been accused of stoking hostility toward immigrants and Jews.

But an attempt is currently being made to ban the National Democratic Party of Germany, known by its initials in German: NPD. The effort has now reached the equivalent of Germany's supreme court, the Federal Constitutional Court.

“The NPD is a neo-Nazi party,” says freelance journalist Felix Huesmann. Huesmann writes extensively about the far right in Germany from his base in Dortmund. “They’re hard-core anti-Semites. They’re racists. Their ideology has more in common with the historical ideology of the Nazis back in the old days in Germany, than with free and open democracy.”

“Democracy and parliamentary elections and the whole democratic process,” says Huesmann, “for them this is just another tool in a toolkit to abolish democracy and to abolish free and open society.”

Germany’s domestic intelligence agency has said the NPD is racist and anti-Semitic, and that it has neo-Nazis among its leadership. German politicans have accused the NPD of indirectly being the “intellectual instigators” of violence against minorities in Germany.

The party is small, with about 5,000 members nationwide. It has no representatives in the national parliament, the Bundestag. But it does have some representation at the state and local level. That in turn means the NPD is entitled to government financial aid for its campaigns.

“This is why so many people here in Germany think this has to stop,” says Huesmann. “We don’t want to fund Nazi propaganda and right-wing violence.”

But the effort is not guaranteed to succeed. A party must be proven to be striving for the "elimination of the democratic constitutional order" in Germany, or to be "jeopardizing the nation’s existence." A previous attempt to ban the NPD failed in 2003 because of a procedural technicality.

The Federal Constitutional Court is expected to take months to decide the case.