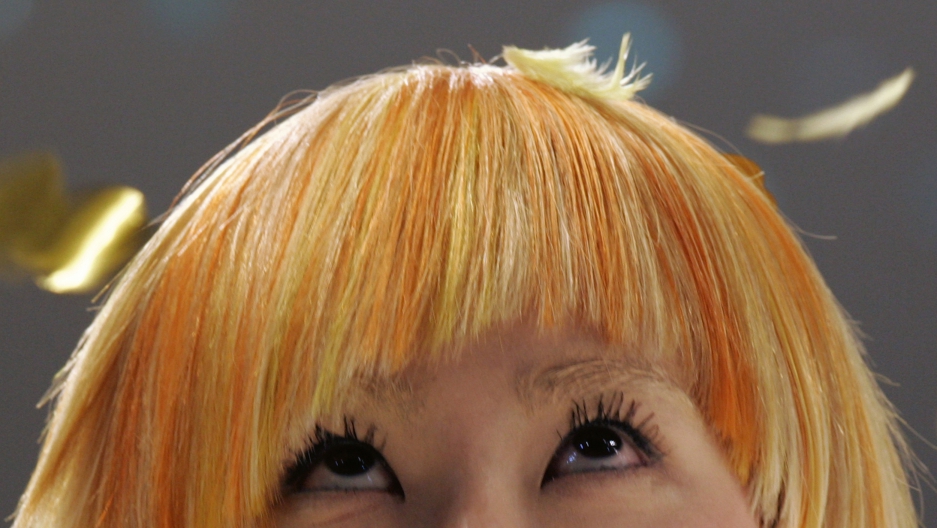 A model looks up at feathers during 'Hair Coloring Splash,' a fashion event focused on hair coloring in Tokyo on March 13, 2007.
Credit: Yuriko Nakao
Share

Dyeing one's hair may no longer be the only option for keeping grey at bay, scientists said Tuesday in announcing the discovery of a gene that makes hair lose its luster.

The gene, IRF4, was known to affect color, but a new study is the first to pinpoint its unique role in the inexorable transition to shades of grey.

Further research on precisely how IRF4 works could unlock techniques and treatments that slow or even halt that process, said the scientists.

"An initial avenue has to do with the role IRF4 could play in survival and maintenance of cells that make pigment," said Andres Ruiz-Linares, a professor at the University College London Genetics Institute who led the study.

Understanding how the gene interacts with other genes controling hair color, for example, might yield cosmetic applications that block the fade to grey as hair grows in the follicle, he told AFP.

Setting aside unresolved ethical issues, one could even "wildly contemplate" the use of gene editing, a ultra-precise cut-and-paste process for altering DNA sequences, he said.

But the IRF4 variant that favours grey also produces fair hair, he cautioned, so tinking with the gene could also mean fewer blondes.

In the study, published in the peer-reviewed journal Nature Communications, Ruiz-Linares and three dozen colleagues investigated the genetic triggers for facial hair, the prevalence of "mono-brows", hair color and shape, balding and greying.

This is well-travelled ground scientifically, but the size and original design of the research yielded a trove of new results.

Another gene, PRSS53, for example, was found to influence curliness, shedding light on the evolution of hair shape that led to straight hair in East Asia and among Native Americans.

A variant of a third gene, PAX3, was strongly associated with "mono-brow", the tendency -- especially among men -- for eyebrows to be joined by a bridge of facial hair.

To undertake the analysis, scientists did a so-called genome-wide association scan (GWAS) of 6,630 volunteers in Brazil, Colombia, Chile, Mexico and Peru, matching similarities in their DNA with physical traits.

But rather than selecting subjects that shared a common ancestry -- all northern Europeans or Japanese, for example -- the researchers deliberately mixed things up.

Nearly half the participants were of European background, 40 percent were Native American, and six percent were of recent African origin.

Altogether, the study yielded 10 previously unknown correlations between genes and hair-related traits that rose to the level of "statistical significance," including the grey hair gene.

Depending on ancestry, people tend to go grey at different stages in their lives, the study found.

"The average age of hair greying for Caucasians is in the mid-30s," Ruiz-Linares told AFP.

For East Asians, the loss of color starts in their late 30s, and for sub-Saharan Africans, in their mid-40s.

Likewise, the greying process is said to be "premature" if it starts before the age of 20 in people of European background, and before 25 and 30 among Asians and Africans, respectively.

The study will also provide new fodder for speculation on the evolutionary drivers behind changes and variation in human hirsuteness, the authors said.

Similarly, straight hair could stem from an adaptation to colder weather to the north and south.

Hair, or the lack of it, may also affect sexual selection, in which certain traits favour reproduction among robust specimens of a species.