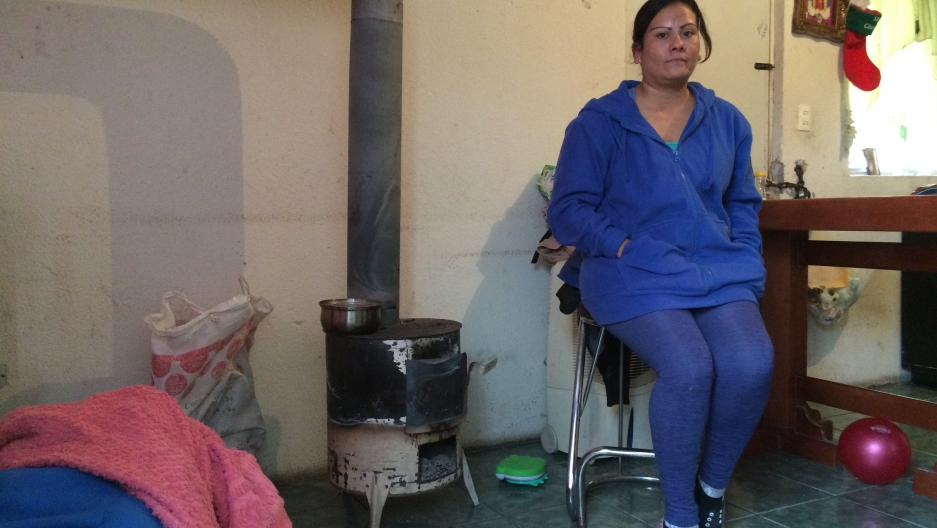 Brenda Estrada was an employee at a CommScope factory in Ciudad Juárez. She heats her three-room home with a makeshift fireplace made from a recycled trash bin.

They make everything from puppy chew-toys to Dell computers to giant wind turbines, but when they try to form a union, they face big trouble.

For half a century, multinational companies have flocked to Ciudad Juárez in search of cheap labor located at the doorstep of the United States. Today, El Paso’s neighbor has largest labor force along the US-Mexico border. In good times, about 200,000 workers are employed at more than 300 factories.

Workers help fuel a half-trillion dollars in annual trade between the US and Mexico, a figure that’s grown six-fold in the last two decades. That's brought prosperity to American border cities like El Paso, where one out of every four jobs is tied to trade and per capita income is rising at a faster pace than the national average.

But on the Mexican side, the peso has been falling in value, while wages have not kept up. According to a study by Mexico's National Autonomous University (UNAM), Mexico’s minimum wage has lost 78 percent of its value in the last 30 years.

A study by the Hunt Institute for Global Competitiveness at the University of Texas at El Paso shows factory wages in Juárez are among the lowest in Mexico, and plant manager salaries are among the highest. When compared to manufacturing wages in China, Mexico is now 40 percent cheaper.

"You can't live on our salaries," says Brenda Estrada, a former employee of one border manufacturer, the American telecommunications giant CommScope. "You just survive." Estrada says she was spending half of her $7/day salary on wood to keep her cinderblock home heated.

Estrada is among those who say CommScope fired them last year for forming a union. Close to 200 workers are now members of that union, which was approved by the Chihuahua state labor tribunal. In a written statement, CommScope denies firing the workers, saying it fired only eight workers in the fall for violating work rules.

"This is something historic," says Cuauhtemoc Estrada, the local labor attorney representing the workers. "Independently organized unions are hard to find” in Mexico, he says. 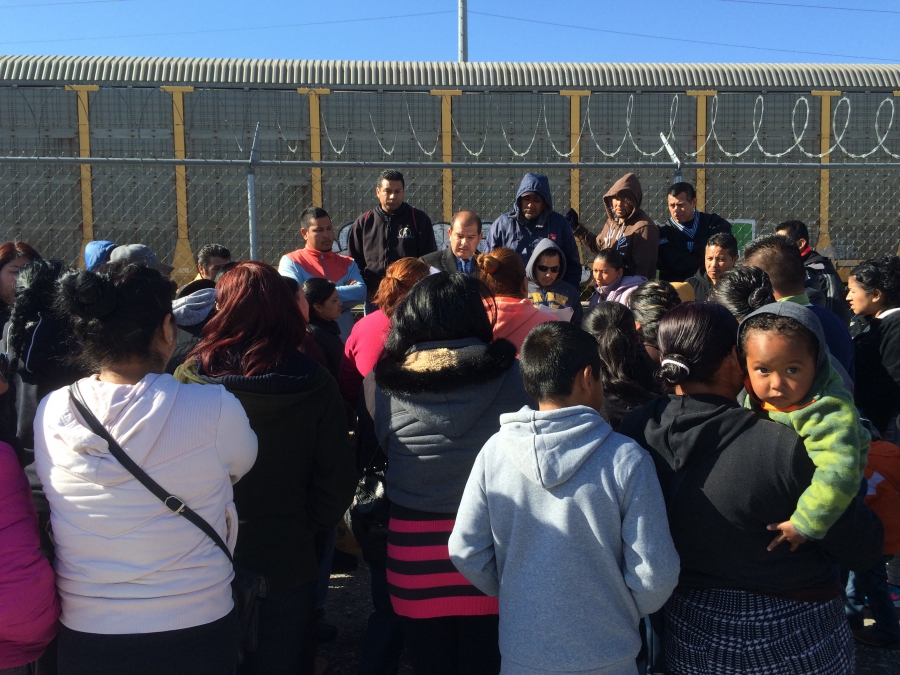 Former factory workers employed by the American-­owned telecommunications company CommScope gather outside the state labor tribunal in Ciudad Juárez. These workers are part of the city's only independently-organized factory union.

More common here are “paper unions” set up and largely controlled by companies. But even those unions are rare in Juárez.

That may change: last year workers from at least four factories, including Lexmark, Eaton-Busman, Scientific Atlanta, and CommScope, began protesting poor working conditions and low wages. CommScope workers are the first to unionize. Estrada, their attorney, says it's the beginning of what could be a long battle.

"Their union petition was rejected by the state three times," Estrada said. "These workers have prevailed out of sheer tenacity."

He recalls how workers set up a protest camp outside the factory for 43 days in the dead of winter. They took turns manning the camp 24 hours a day. Some had to bring their children.

Others, including the secretary of labor for the state of Chihuahua, have publicly blamed local labor attorneys for provoking worker unrest out of their own financial interest.

The workers deny this, saying they began organizing among themselves and then sought legal help. Among their complaints are neglect of injured workers, forced overtime without extra pay and inadequate sick leave. But their main complaint is salary.

At CommScope workers manufacture coaxial and fiber optic cables used by companies like Verizon and major internet providers. In its statement, the company said an entry level worker, after six months employment, earns $8 a day plus benefits. That's double Mexico's federal minimum wage, which “Businesses promote this region as an area of global competitiveness," says Kathleen Staudt, a professor at the University of Texas at El Paso who’s studied labor issues in Mexico for 30 years.

“People need to unpack that phrase ‘global competitiveness’ and understand what it really means," Staudt says. "It means a kind of competitiveness that’s exercised on the backs of workers.”

In its 2014 financial report CommScope reported earnings of $236 million. In that report, the company tells its shareholders it utilizes "low-cost geographies" like Juárez to save money. 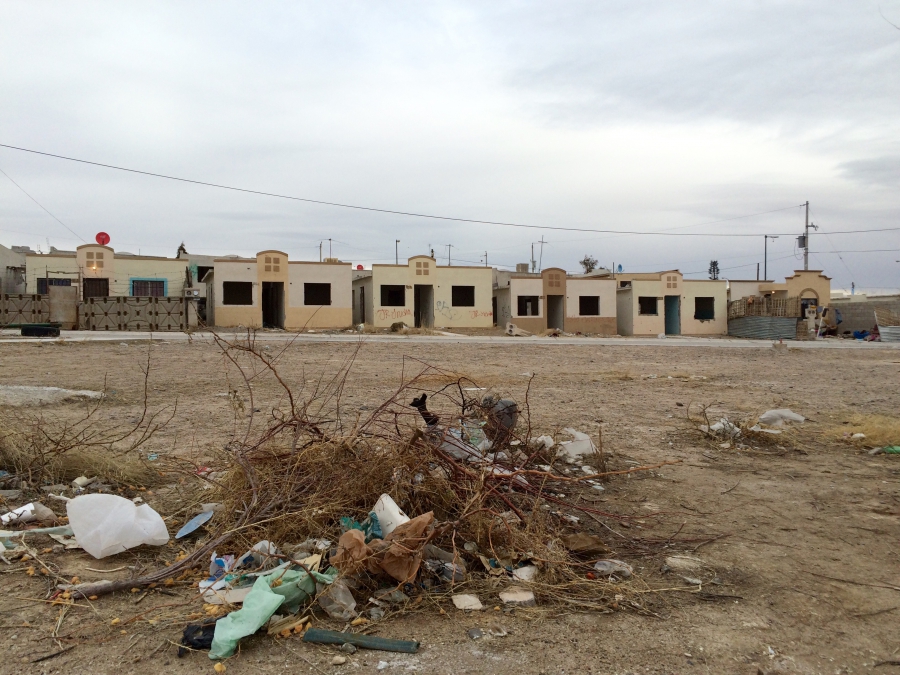 Many factory workers in Ciudad Juárez live in government-subsidized homes in outlying neighborhoods that are often neglected.

A CommScope spokesman said all its operations outside the US are in compliance with local labor laws and that the company encourages employee feedback. Frank Drendel, CommScope's founder and board chairman, declined a request for an interview.

BorderPlex, a consulting group in El Paso that recruits companies to Juárez, was also unavailable for an interview.

A source who’s worked in management for a major factory in Juárez and asked to remain anonymous explained “executives fear speaking about unions more than the plague.”

Another former CommScope worker, Ali Lopez, said, "It's sad that these companies don't value the work we do." Lopez said that after she lost her job, her family went without running water for three months.

Estrada, the union attorney, says despite all they’ve been through, the workers don't want the factories to leave the city.

"They generate jobs," he said. "All they want is for the company to share its profit fairly and allow its workers to have a decent life."

Monica Ortiz Uribe originally reported this story from the KJZZ bureau of the Fronteras Desk, a public radio collaboration in the Southwest.