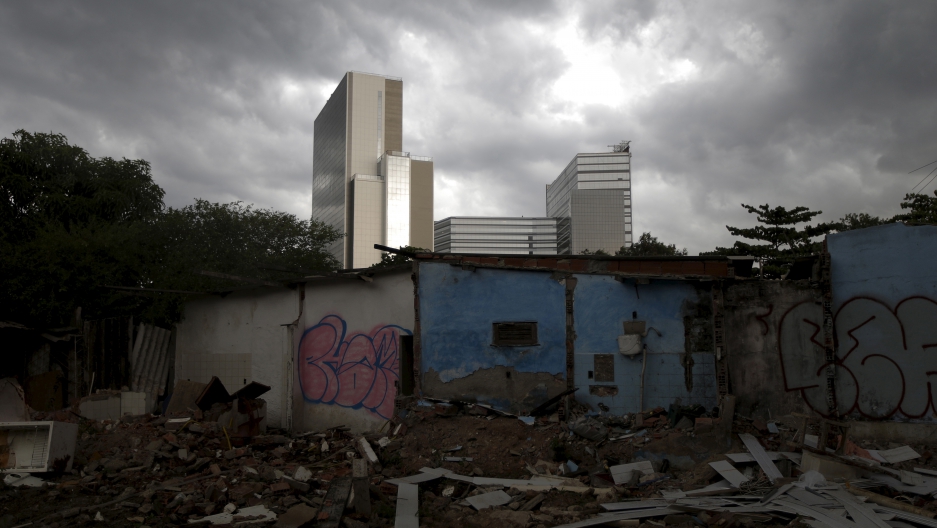 Partially demolished houses in the Vila Autodromo slum with the Rio 2016 Olympic Park in the background in Rio de Janeiro, Brazil.
Credit:

When Rio de Janeiro beat out Chicago, Tokyo and Madrid to host the 2016 Olympic Games, it was a huge morale-booster for Brazil. It was October 2009 and the Brazilian seaside city erupted in celebration when it became the first to host the Olympics in South America.

In making its bid, the Brazilian Olympic committee promised to create a city worthy of the Olympic torch. It promised to tackle Rio's clogged streets, upgrade up the favelas, and clean up Rio's polluted bays and waterways which are full of sewage and other filth.

The committee also promised to address the amount of pollution generated by the Olympics by planting trees and reducing the country's carbon emissions.

But with less than six months to go, Rio authorities are finding it difficult to come through on the promises.

"Rio is surrounded by the Guanabara Bay and the Atlantic Ocean ... and it smells awful," says Taylor Barnes, a freelance reporter in Rio de Janeiro. "I walked along the waterway that led to the beach, where you literally see visible human waste as though someone just put it in their toilet going out into the ocean where people are swimming.

"And as far as low emissions, the new bus rapid transit lines around the city, which largely serve the game's locations — they actually run on 90 percent diesel. It's not at all what was said in the 2009 bid."

"This is a low moment in Brazil," says Taylor, who wrote about this for USA Today. "Rarely has a country hosted a summer Olympics when they're in a very deep economic recession," which occurred after the 2014 World Cup.

There's not much enthusiasm in general. That said, there also aren't the massive protests that occurred in the weeks leading up to the World Cup, Taylor says, when Brazilians were angry the government wasn't spending that money on infrastructure and social services.

"I think Brazilians are largely distracted," Taylor says. "There's mounting job losses and inflation and the Olympics are a sideshow for the time being."

Still, there's no doubt in Taylor's mind that Brazil will pull off the event.

"The skeleton is there, the actual hosting of the event is there," she says, "But some of the things that were supposed to benefit Brazilians — like a less polluted city or upgrading the favelas that would have meant vast improvements of housing across the city — those are not happening. And without the leveraging of the Olympics, it's questionable whether it ever will."